By Dateline Staff on January 30, 2017 in University

Doubly good tidings recently came Gail Goodman’s way. On a single day over the winter break, the distinguished professor of psychology learned that she had been selected for not just one prestigious career honor but two:

“For the past 40 years, Professor Goodman has dedicated her life to understanding the experiences of children involved in the legal system,” the APA award committee wrote. “It is not hyperbole to say that her contributions have altered the lives of children and their guardians (for the better!) across the globe.”

Goodman’s research on the ability of children to testify in court about events they’ve experienced or witnessed has led to legislative changes and has been cited numerous times in U.S. Supreme Court decisions. “Because of her research, children involved in the legal system as victims, witnesses and defendants are better protected in terms of decreasing further trauma (e.g., by being allowed to testify via closed- circuit television) and enhancing due process considerations (e.g., by informing judges and attorneys about child and adolescent development),” the committee stated.

The APA award will be presented during the association's annual convention, Aug. 3-6, in Washington, D.C.

Social sciences faculty at the University of Oslo nominated her for the honorary degree, which will be conferred at a ceremony Sept. 1. Stockholm University awarded an honorary doctorate to her husband, Phil Shaver, UC Davis distinguished professor emeritus of psychology, in a white-tie ceremony last fall.

It is given annually to a distinguished senior researcher/teacher in the field of nonparametric statistics and will be presented at the Joint Statistical Meetings in Baltimore in August.

Müller specializes in nonparametric statistics, biostatistics and statistical methodology for stochastic processes (data that include random variables that change over time). Applications of his work include neuroimaging, genomics, mortality and aging, demography and economics.

In addition to receiving a cash prize and plaque, Müller will deliver a special lecture. The Noether Awards were established in 1999 as a tribute to Gottfried Emanuel Noether, a leading scholar in nonparametric statistics with interests in research and teaching.

UC Davis has earned a 2017 World at Work Seal of Distinction — marking the fifth year in a row the university has been honored for its “total rewards” portfolio, including benefits and work-life initiatives that go beyond salary to create a positive work environment. 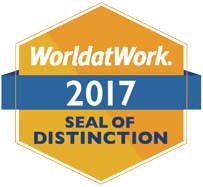 World at Work, a nonprofit association focused on work-life effectiveness and other human resources issues.

UC Davis’ Seal of Distinction applies to the Davis campus and UC Davis Health. HR’s WorkLife and Wellness team gets much of the credit for delivering the seal five years running.

“UC Davis strives to effectively support the 21st-century work force through established benefits, policies and programs,” said Barbara Ashby, manager of WorkLife and Wellness. “This award acknowledges the many policies, units and programs spread throughout UC Davis, that all work together to enhance employee satisfaction and engagement.”

From award-winning breastfeeding support programs and free counseling services, to informative brown bags and advocacy for alternative work schedules, UC Davis makes these investments to retain and develop the talented individuals who comprise the university’s work force, and to enable employees to integrate their careers with their personal lives.

Jennie Konsella-Norene of the Office of Global Affairs has been recognized on a top-10 list for 2016, as the author of one of the 10 best posts of the year on the Fulbright Scholar Blog.

Konsella-Norene is UC Davis’ liaison with the Fulbright Scholar Program, administered by the Washington, D.C.-based Council for International Exchange of Scholars on behalf of the U.S. Department of State.

The council, which maintains the Fulbright Scholar Blog, honored Konsella-Norene for her post titled, “Campus Spotlight: University of California, Davis,” in which she starts with some statistics: Since 1997-98, UC Davis has hosted nearly 200 Fulbright Visiting Scholars from all over the world and has sent nearly 60 UC Davis faculty abroad on Fulbright awards.

“We make it a point to stay in touch with our Fulbright Scholars, who become useful resources for potential applicants or when the opportunity arises to create institutional partnerships,” Konsella-Norene wrote.

She noted UC Davis’ Fulbright Spotlight webpage, and she gave examples of how Fulbright Scholars (both U.S. and visiting) build global networks, bridge geographical and cultural boundaries, and respond to society’s most pressing problems. “These efforts strengthen UC Davis and create global understanding among the community,” she wrote.

Checking In With Chancellor May: Unity

Get COVID-19 Vaccine As Soon As You’re Allowed, Experts Urge