LAURELS: For Faculty in Communication, Law, Linguistics and Psychology

And a Productive 20 Years of Gilman Study Abroad Scholarships

El-Mohandes, a pediatrician, epidemiologist and dean of the Graduate School of Public Health and Health Policy at City University of New York, established the award in 2019 to recognize colleagues up to 40 years old who are using innovative solutions to address complex public health issues.

The APHA honored Zhang for her research on communication and emerging media technologies that promote healthy lifestyles and preventive behaviors across diverse populations.

Her work includes social media-based interventions and the development of mobile app technologies and artificial intelligence chatbots designed to increase physical activity, contraceptive use and cancer prevention in underserved groups.

Yoshimi Fukuoka, a professor of physiological nursing at UC San Francisco, said in her nomination: “Dr. Zhang has made extensive research contributions to advancing persuasive technology and electronic and mobile health, especially for the purpose of improving lifestyle modification programs to reduce the public health burden of noncommunicable diseases.”

Zhang has published more than 40 scholarly articles in leading journals. Her work has been supported by the National Cancer Institute and the Robert Wood Johnson Foundation.

Law professor Brian Leiter of the University of Chicago Law School compiled the rankings from data collected by Professor Greg Sisk and colleagues at the University of St. Thomas for their rankings of the “Top 50 Law Faculties in Scholarly Impact,” based on number of citations to tenured faculty scholarship in law journals from 2016 to 2020.

Leiter’s rankings show scholarly impact by individual faculty members in different fields of the law. His immigration law rankings, besides No. 1 Johnson, include UC Davis Professor Gabriel “Jack” Chin as a “highly cited” scholar who work partly in this area. Johnson and Chin also are listed as highly cited scholars who work partly in critical theories of law.

The Linguistics Society of America recently presented its Linguistics, Language and the Public Award to UC Davis’ Robert Bayley and three colleagues for their research on Black American Sign Language.

The recipients: Bayley, a professor of linguistics; Joseph Hill, an associate professor at the Rochester Institute of Technology’s National Technical Institute for the Deaf; and Carolyn McCaskill and Ceil Lucas, both professors at Gallaudet University.

They conducted a six-year study of Black American Sign Language that resulted in the book The Hidden Treasure of Black ASL: Its History and Structure (Gallaudet University Press, 2011). It came out in paperback in May 2020.

A recent documentary, Signing Black in America, highlights their research. Their findings were also cited in a January 2021 article in The New York Times on the growing visibility of Black Deaf signers.

In studying the language of about 100 Black Deaf signers in six Southern states, Bayley and colleagues found that Black ASL is more aligned with early American Sign Language than the white counterpart. They attribute that difference to segregation and a longtime emphasis in white deaf schools on oralism — teaching deaf students to speak and lip-read more than sign.

“The work effectively increases public awareness of language use in African American communities, and it inspires communities to work to continue to celebrate and maintain BASL,” according to the award announcement on the LSA website. “That work inspires movement from awareness to action — the kind of impact linguistics should have in communities all over the world! In a word, it is an excellent example of work by linguists that informs the public.”

Tamara Swaab, a professor in the Department of Psychology and at the Center for Mind and Brain, was recently named a fellow of the Association for Psychological Science, or APS, for her contributions to the understanding of human language and cognition.

Swaab, who joined UC Davis in 2002, studies the cognitive and neural underpinnings of language comprehension. She is the editor-in-chief of the journal Cognition and the treasurer of the Society for the Neurobiology of Language.

Fellow status is awarded to APS members who have made sustained outstanding contributions to the science of psychology in the areas of research, teaching, service and/or application.

Swaab is one of 31 APS fellows at UC Davis, many of whom are also in the Department of Psychology and at the Center for Mind and Brain. 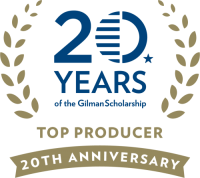 UC Davis ranks 11th among large institutions in the number of students (282) who have received Gilman scholarships from the State Department for study abroad over the last two decades. The department’s Bureau of Educational and Cultural Affairs, or ECA, made the announcement in conjunction with the 20th anniversary of the Benjamin A. Gilman International Scholarship Program.

“Our campus strives to ensure global learning is accessible to all students, and our partnership with Gilman is an embodiment of that commitment,” said Joanna Regulska, vice provost and dean of Global Affairs. “Through collaboration and the support of ECA and the Gilman program, we collectively unlocked the door for hundreds of UC Davis students to learn and have an impact on the world.”

The Gilman Scholarship Program is administered at UC Davis through a partnership between the Global Learning Hub, within Global Affairs, and Financial Aid and Scholarships.

Throughout its 20-year history, the Gilman program has reshaped study abroad to make it more accessible and inclusive for American students by providing scholarships to outstanding U.S. undergraduate students who, due to financial constraints, might not otherwise participate. Since the program’s inception in 2001, more than 34,000 Gilman Scholars from all U.S. states, Puerto Rico and other U.S. territories have studied or interned in more than 155 countries around the globe.