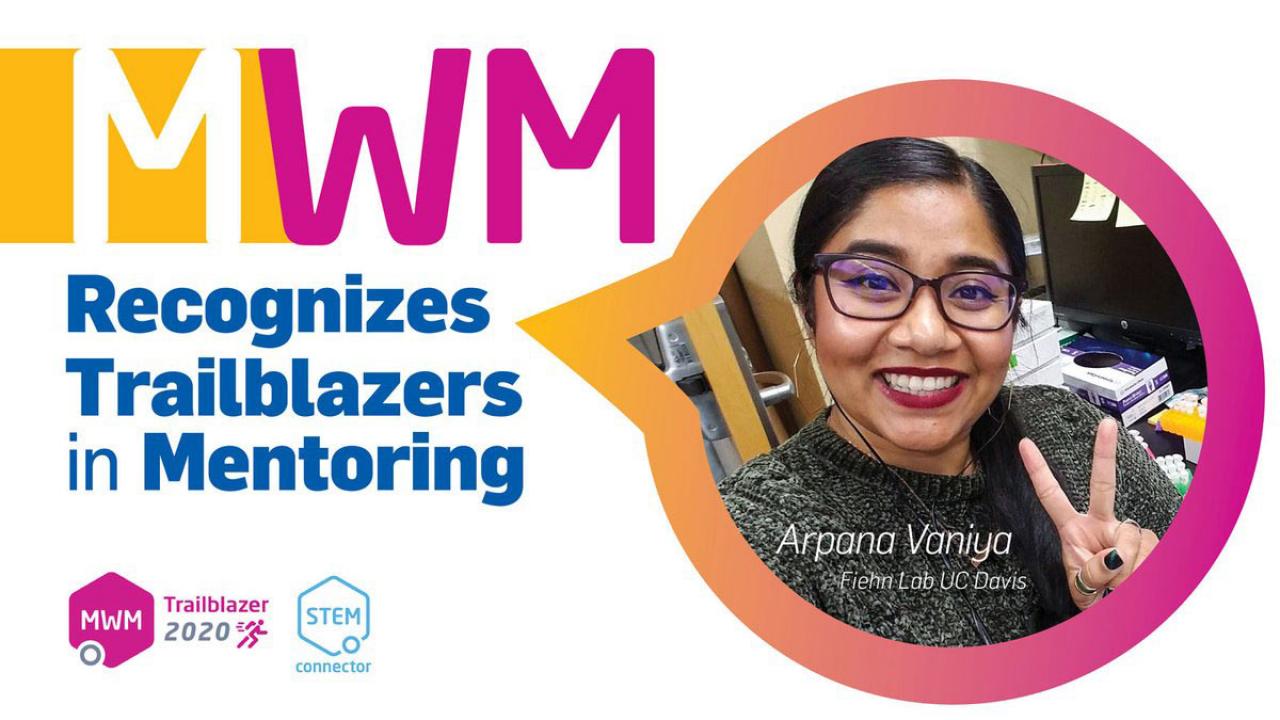 Arpana Vaniya, academic coordinator in the West Coast Metabolomics Center at the UC Davis Genome Center, recently received a Trailblazer Award for Mentoring from Million Women Mentors, a global movement to spark interest and confidence in girls and women to pursue STEM careers and leadership.

Vaniya was among 26 winners recognized during the Million Women Mentors virtual summit in late October.

“I am very enthusiastic to express my utmost support for Dr. Arpana Vaniya as recipient for the MWM trailblazer award 2020,” Professor Oliver Fiehn wrote in nominating her for the award. “[She] has dedicated much of her life to mentoring young mass spectrometrists in my own laboratory and beyond.”

Vaniya has trained and mentored numerous younger scientists during her graduate studies and postdoctoral research in the UC Davis Department of Chemistry and at the West Coast Metabolomics Center, which is led by Fiehn.

She also has volunteered with, founded, developed or led a number of educational and outreach efforts in the fields of science, technology, engineering and math, or STEM, especially in her own field of mass spectroscopy. These include: UC Davis Snap the Gap, a program aimed at closing the gender gap in STEM, in partnership with Million Women Mentors and littleBits; hands-on workshops for the Girls in Science Education Fair at Peregrine School in Davis; a discussion panel on Women in STEM for underrepresented minorities with the Tolowa Dee-ni’ nation; West Coast Metabolomics Center Science with Kids, bringing third-graders into the lab; and panel speaker at the Girls Leading Our Way, or GLOW, Leadership and STEM Conference, talking about her experience as a woman of color in STEM.

During the pandemic, Vaniya and four of her colleagues organized the Virtual Podium, a 10-part weekly webinar series focused on compelling scientific research in chemistry, biology and informatics, reaching more than 2,800 participants worldwide at the height of the shutdown in the spring. She is also a founder and chair of WomiX: Women in Metabolomics, an interest group of the Metabolomics Association of North America.

The CAREER name is a shorthand reference to the NSF’s Faculty Early Career Development Program, which gives the awards to junior faculty in recognition of their outstanding research and excellence in teaching, and for including outreach in their work.

Velázquez, who joined UC Davis in 2016, investigates new materials for use in nanoelectronics, green energy and environmental remediation. His CAREER grant will support research on compounds called chalcogenides, which contain the elements sulfur, selenium or tellurium. Many chalcogenides are semiconductors and can harness sunlight to create fuels from carbon dioxide or convert solar energy into electricity.

Velázquez and his students will use computational modeling to help develop new chalcogenides for energy conversion uses. The team will collaborate with researchers at the University of Colorado Boulder, the Molecular Foundry at Lawrence Berkeley National Laboratory and the SLAC National Accelerator Laboratory.

In addition, Velázquez will design educational programs that support first-generation and underrepresented students at the high school and university levels.

Velázquez, who joined the Department of Chemistry in 2016, is also the recipient of early career honors from the Royal Society of Chemistry (which named him an Emerging Investigator), the Research Corporation for Science Advancement (Cottrell Scholar and Scialog Fellow) and the UC Davis Center for the Advancement of Multicultural Perspectives on Science, or CAMPOS (Faculty Scholar).

Jesús De Loera, professor of mathematics, is the recipient of the 2020 Farkas Prize, awarded annually to a mid-career researcher in the field of optimization by the Institute for Operations Research and the Management Sciences (INFORMS) Optimization Society.

The award was bestowed in recognition of De Loera’s “pioneering work at the intersection of discrete mathematics, optimization and algebraic geometry,” according to INFORMS.

The award also recognizes his successful computational implementation of methods based on complex mathematical theory, and his contributions as a speaker and mentor “whose infectious enthusiasm draws other researchers to work in areas where they might otherwise not dare to venture.”

The American Geophysical Union recently announced the election of 62 new fellows, including two from UC Davis: Isabel Montañez, distinguished professor, and Qing-zhu Yin, professor, both of the Department of Earth and Planetary Sciences.

The AGU bestows fellow status in recognition of exceptional contributions to the earth and space sciences community through breakthrough, discovery or innovation in their fields.

Montañez, a geochemist, is an expert in extracting detailed information about ancient climates from rocks. Her research has helped reveal the role greenhouse gases played in past climate shifts and provided new insights into the Cambrian explosion and the establishment of complex marine ecosystems.

Yin, who specializes in planetary science and geochemistry, studies meteorites to better understand the formation of our solar system. Work by Yin’s lab has shown meteorites fall into two broad groups by composition, with one group originating in the outer solar system and the other group forming closer to the sun.