How Javanese Music Enchanted the West

Exposure to this exotic culture produced a “javaphilia” – a fascination for the music and dance of Java. That long-lasting allure, and how the music had been transformed, could be seen nearly 100 years later at the 1986 First International Gamelan Festival at Expo ’86 in Toronto.

This story is the first in a series of chats with UC Davis authors who have written new books.

A love affair with Javanese art 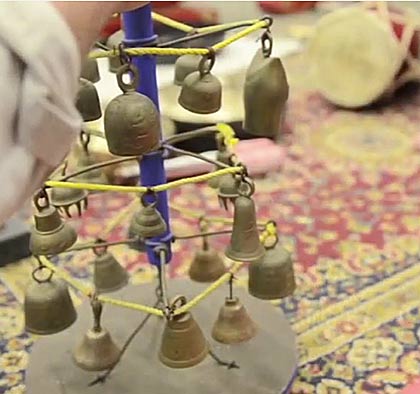 The UC Davis community can hear gamelan music April 24 during its “Musics of the World” concert at 7 p.m. at the Mondavi Center for Performing Arts.

The world-music concert will also include performances by a larger student gamelan ensemble and the Indian, Brazilian and Korean ensembles.

The UC Davis group with Spiller will also perform the Harrison work for an Earplay: New Chamber Music concert May 28 at the ODC Theatre in San Francisco.

He examines how Javanese music and dance helped those feeling marginalized by mainstream society express their unique identities, as well as looks at the historical and musicological aspects. Spiller writes about some of these key figures and his own experience with gamelan music.

Blending music of East and West

One important promoter of gamelan was Mantle Hood, who developed the ethnomusicology program at UCLA in the 1950s. He created a gamelan ensemble there, setting an academic music model that spread to universities and colleges throughout the country.

The gamelan is one of many ensembles that provide UC Davis students, including non-music majors, with a rich variety of musical opportunities.

The Department of Music has a full symphony orchestra, Indian and Korean ensembles, and groups focusing on chamber music, Baroque and Renaissance music, and jazz.

And no one did more to bring gamelan music to wider attention than composer Lou Harrison, who spent most of his life in the San Francisco Bay Area and wrote a number of works for gamelan often including Western instruments.

“Certainly Harrison’s influence brought interest to people who might not have heard it otherwise and brought it into the new music community and the fringes of the mainstream,” said Spiller, who is also a musician. “He wasn’t unique in combining Asian and Western music, but he did it in a way that people found attractive. He was very literal and obvious about it.”

The marginalized find a place

“All felt marginalized by the mainstream of Western society,” he said. “Gauthier by her lukewarm reception as an operatic mezzo-soprano in Europe, Stowitts by his homosexuality, Hood by conflicting interests in spirituality and scientific method, and Harrison by his predilection for prettiness in a musical milieu that valued more anxious expressions.”

“There are some Americans who are not happy with the various musical expression available to them,” Spiller said. “Java has proven to be a fertile place for such individuals to find alternative means of expressing themselves.”

Spiller first encountered gamelan while an undergraduate at UC Santa Cruz. He earned a master’s degree in harp performance from Holy Names College, and a master’s degree and doctorate in ethnomusicology from UC Berkeley. He established the the ensemble shortly after he began teaching at UC Davis in 2005.