Dozens of people took chairs or stood for the sun-drenched, late afternoon ceremony on the Memorial Union’s South Patio. Other people happened by — only to stop in their tracks after seeing the precision marching of the Army ROTC color guard, and hearing the Pledge of Allegiance and the Star-Spangled Banner.

Campus Recreation and Unions organizes the ceremony to honor our fallen Aggies and to remind the campus that those Aggies are the reason for the “Memorial” in Memorial Union, as explained in the welcome address by Milt Lang, associate vice chancellor for Student Affairs.

‘Memorial Day is Every Day’ 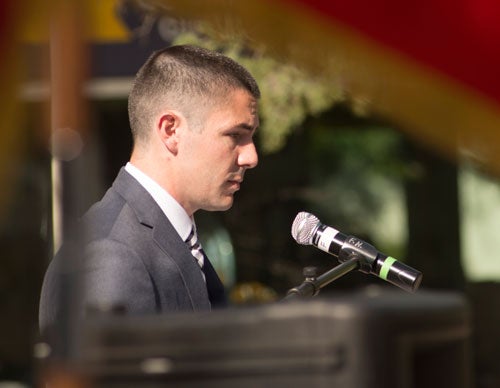 Army veteran Nick Chase, a second-year law student who serves as president of the Davis Student Veteran Organization, gave the keynote address, focusing on the 135 Gold Star Aggies: seven from WWI, 111 from WWII, three from Korea, four from Vietnam, one from Iraq, eight during peacetime and one who died under unknown circumstances.

He spoke about three of those fallen Aggies, Maj. Phillips, Capt. Barovetto and Lt. Col. Taylor, to give a sense of the “exemplary heroism, patriotism and dedication to duty” of all the men in UC Davis’ Golden Memory Book, a compilation of all the Aggies lost in military service. You can see the Golden Memory Book online.

He described their spirit of service — the willingness to look after the needs of others before considering oneself, recognizing that the whole is more important than the part.

And he gave an account of the night in 2013 when he watched as a fallen comrade, killed by a roadside bomb, began his journey home from Afghanistan. Chase and other troops stood in the rain along a narrow road from the base hospital to the helicopter landing pad. The only light was in the back of the Humvee that carried the soldier’s flag-draped coffin.

“As the Humvee passed us, the light illuminating Sergeant Wade’s coffin briefly shone on the faces of each soldier it passed, all of whom were resolutely holding their salutes,” Chase said. “At that moment, I’m sure many of us were grateful for the rain — cold and miserable though it was — because it masked the tears that would otherwise surely be visible.

“I didn’t know Sergeant Wade, he was in a different unit than me, but we were bonded nonetheless. We were both combat engineers tasked with finding and clearing roadside bombs, but most importantly, we were both soldiers.”

Thursday, Chase and other military personnel — from ROTC students and student veterans to active-duty — honored that enduring bond with one another and with their fallen comrades. Six members of the Davis Student Veteran Organization read the names of the 135 Gold Star Aggies, and a student played taps. Earlier in the ceremony, members of the Veteran Constituency Group (for staff, faculty and students) presented a memorial wreath.

Memorial Day is not just the last Monday in May, Chase said. For Sgt. Wade’s family, and the Phillips, Barovetto and Taylor families, and others who have lost loved ones, “Memorial Day is every day,” he said.

“As such, it falls on us, the living, to live every day in a manner that gives honor to those who sacrificed their lives so that we might live free. We can do this by volunteering our time, our skills, our money and our compassion; by working every day to make our communities, and, by extension, the world, a better and safer place.”

Taking the Temperature of Dark Matter