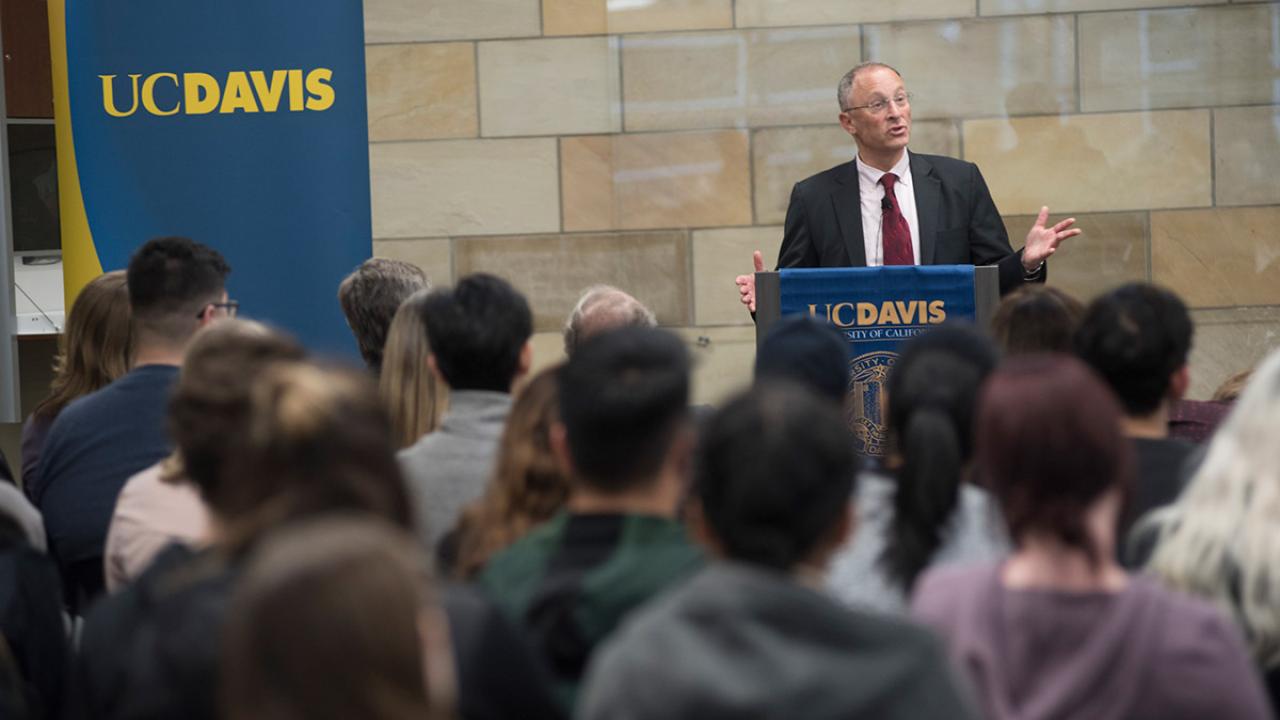 Scholar and student visas are expiring — how can the university help?

What is happening with applications from overseas for admission to graduate school in the fall? Can you you give assurance that decisions will be based purely on academic qualifications rather than nationality or religion — so that the current temporary atmosphere will not affect any admission decisions?

My fiancée’s May 24 appointment for immigration has been canceled — what can I do?

What about students from China — is something going to happen to me?

These are examples of concerns raised by international students at “A Conversation About the Executive Order on Immigration,” sponsored by the Office of Global Affairs and held last Thursday afternoon (Feb. 2) at the International Center. The forum drew a standing-room-only crowd, its size estimated at more than 250 people.

Interim Chancellor Ralph J. Hexter, in his opening remarks, said: “One of the reasons we’re here today is to try to eliminate some of the confusion surrounding the order, but there’s another reason that I draw your attention to it as well: We may need to steel ourselves to live for some time with an administration that does not concern itself with prior consultation and notice, with clear or careful formulation of directives, or smooth and professional implementation.”

With an audience comprising more than international students and scholars, Hexter asked: “Why are so many who aren’t directly afflicted by the order experiencing anger and sadness? Part of the answer, I believe, is those feelings are the inevitable products of empathy for those who are — and a belief in the value and dignity of all people, regardless of their background.

“Indeed, it’s difficult not to be deeply affected when one considers the plight of refugees, most of them women or children, whose great suffering and hardship has been followed by denial of entry into the United States. I think I’ll add shame to that list of emotions.

“All refugees ... and all immigrants have powerful stories. I said this was part of the answer, but there’s another part as well. Anger and sadness are also inevitable responses for those who believe deeply in the United States as a country that welcomes immigrants of all backgrounds, is built on their contributions of labor and culture, and loudly announces to the world — or at least it did — give me your tired, your poor, your huddled masses yearning to breathe free. Anger and sadness and shame are inevitable responses of those who revere the Constitution’s guarantee of equal rights for all people, regardless of background.”

Order to play no part in admissions decisions

Prasant Mohapatra, vice provost of Graduate Education and dean of Graduate Studies, responding to the question about admission decisions for the fall, said he had notified all graduate programs to use only those admission factors that have been used in the past. “So there will be no new information from the executive order used in the admissions process,” he said. “And the reason for that is … as it stands now, the executive order will expire in 90 days, and the entry point for all the graduate students, most of them, are for fall admissions, which is beyond the 90 days. If it’s changed — (and) we all know that things might change — then we will provide further information.”

He added that almost all of UC Davis’ graduate programs have a process whereby students can put in requests for deferral of admission, “and we will be considering those very liberally.”

The forum organizers took notes on all the questions, for follow-up, and representatives from two campus offices described how they can help:

• Services for International Students and Scholars — SISS Director Wesley Young said: “We regularly work with outside counsel, that is, immigration attorneys. Now, I can’t speak for them, but we can always call on them for general advice that might respond to some legal issues that our office can’t address. And … they’re very often willing to provide a certain level of advice without charge, but I think if a person has a very specific case where a person needs help, very specific help, it may or may not involve some charge. But I think we can count on them for a certain level of assistance.”

Young said his office has a lot of experience working in immigration, “and I can assure you that we will always do everything that we can to make sure that students and scholars are able to be at UC Davis to study, to do research, to teach, whatever they’re here for.”

Alluding to the question about students from China — a country that President Trump did not include in his executive order on immigration — Young said: “I hear a lot of people asking for guarantees, and this is where it’s really difficult, because right now the situation is changing every day. … We see pronouncements from the Department of Homeland Security saying that people with green cards are exempt from this executive order, but we also hear that implementation is not consistent across the country.”

He said he was certain of this: “We will always do as much as we can, we will connect you with all the resources that we are aware of, to make sure (that in) your time here you can accomplish what you’ve come to accomplish.”

• UC Undocumented Legal Services Center, which is based at the UC Davis School of Law and serves all UC campuses except Berkeley (which has its own center) — “Our center provides immigration legal services to all UC students who are not international students,” said Rachel Ray, managing attorney. “Our target audience (is) undocumented students, but that does not preclude students who are not international but who are lawful permanent residents or (who are) here through some other method — they can contact us.

“And our services are also available to immediate family members of any student, so if you’re a U.S. citizen and you have a parent, a sibling, a child, a spouse or an immediately future spouse, you can contact us and we may be able to provide legal services to that family member.” The center does not help with employment-based visas or employment-based transition to lawful permit residency, Ray said.

Hexter spoke out against the executive order’s “inappropriate linkage to one religion despite claims to the contrary. … The list of countries designated in the order is broad and unfairly discriminatory against Muslims. It’s founded upon a simplistic and erroneous belief that Muslims in general pose a significant threat to Americans and to U.S. national security.”

“Let me pause here to state publicly, very explicitly, once again, that anti-Muslim prejudice and discrimination — besides lacking foundation — is profoundly un-American and wholly contrary to the values of the University of California and UC Davis and ethically indefensible and repugnant.”

Joanna Regulska, vice provost and associate chancellor of Global Affairs, commented on all three of the president’s executive orders on immigration, saying they undermine American values and harm the country’s higher education system.

“Furthermore, for all of us, as scholars and scientists, the inability to freely collaborate across borders impacts our work, our research, the knowledge and discovery we produce. In the long run, this cultural isolationism produces unwarranted suspicion, promotes violence and makes us all less secure.”

The forum closed with Regulska’s reading of an audience member’s written comment: “I fear the impact the orders will have on individuals who are not technically included. I fear that immigrant Americans will feel so unwelcome that they will leave on their own. That will be our extreme loss.”