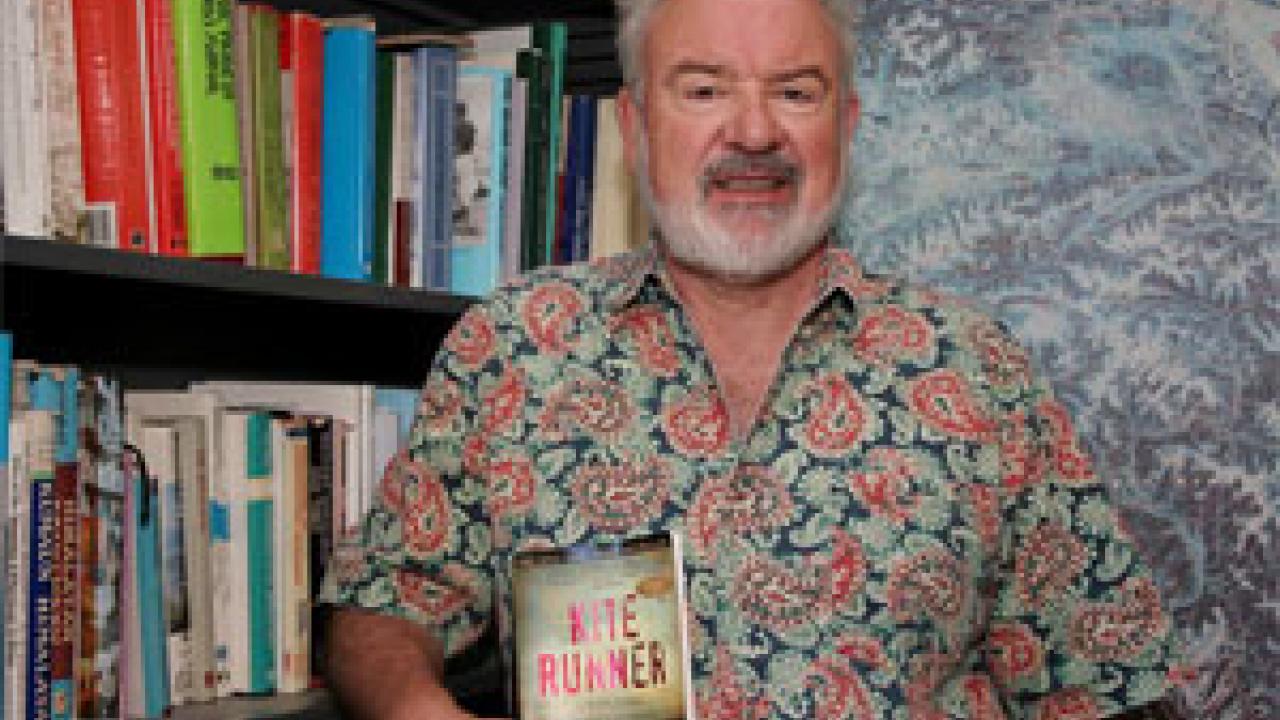 As the Campus Community Book Project highlights South Asia, someone with first-hand knowledge of the region will be among those offering perspective: Nigel Allan — a seasoned adventurer with a slight Scottish brogue and an expertise on Afghan society perhaps unparalled on campus.

He is one of dozens of faculty and staff members and administrators who will lend their expertise to the fourth annual book project as activities swing into full gear this fall.

The book project selection, Khaled Hosseini's The Kite Runner, follows a boy growing up in Afghanistan. Allan, a cultural geographer in the environmental design department, has traveled to Afghanistan and adjacent South Asian countries more than two dozen times for his research over the past 35 years.

Recognizing that he may have important context to offer the project, in May Allan e-mailed book project committee chair Karen Roth, offering to lead one or more book project discussion sessions.

"Dr. Allan adds important historical and geographical background to the events and places mentioned in The Kite Runner," Roth said. "His expertise and knowledge about Afghanistan will complement our understanding of the story and the cultures of the people that live in the country. In the brief time I spoke with him, I learned so much — including the context for why one of the characters was so greatly influenced by Hitler and Germany."

Allan has published extensively on Afghanistan, from scholarly journals and op-ed pieces to more popular outlets, like Encyclopedia Britannica. He also serves on the executive board of the American Institute of Afghanistan Studies — the official American academic exchange between American universities and colleges and Afghanistan — and is teaching a class this quarter on the geography of South Asia.

Allan wrote his doctoral dissertation on Afghan ethnic groups and their crops in the early 1970s. He studied 410 villages around the country, 362 of which he visited.

"I was prohibited from visiting the others by the government," he said. "They actually told me I couldn't work or spend a night outside of Kabul. Which I did. But the security problems were major at that time."

Allan has had to deal with the region's turbulence for as long as he has studied there, but the violence has found the public eye in recent years. Just last week, at least 19 people were killed in a Kandahar mosque by a suicide bomber. And Allan noted that two people died from a bomb a few weeks ago at a Kabul Internet café he used to frequent.

"Violence has always existed in the region," he said. "I'm cautious about where I travel and with whom I travel."

Then there are the more bureaucratic obstacles Allan has faced when doing his research abroad. He has returned to Afghanistan several times since Sept. 11, 2001, but has had trouble finding government research funding because of a travel ban imposed by the U.S. Department of State.

"It's hard to find money to go there," he said.

Allan most recently traveled to Afghanistan last spring, when he studied the 10-year impact of the Taliban on the environment. His other post-9/11 visit was in 2002, when he looked at the country's drug trade and whether the same opium networks still existed. Allan also does research in Pakistan, India, Tajikistan, Nepal and Tibet. He plans to return to the region in September.

The Kite Runner, which follows the relationship between an elite boy belonging to the Pashtun ethnic group and his downtrodden Hazara companion, will allow students to discuss important global issues, Allan said.

"There are hatreds between ethnic groups, and this book will help people talk through these feelings," he said. "I think it's important for students to realize that ethnic conflicts exist in the world."

Allan also said that author Hosseini is "more of an Afghan in the wider sense" than most natives of the country because of his background. Hosseini's family is from the western city of Herat, he had a Pashtun father and a Tajik mother and had also lived abroad. "He has a multicultural advantage," Allan said.

Allan expects to contribute several lectures on Afghan society to the book project, including one tentatively scheduled for Nov. 16 entitled, "Historical Perspectives on Afghanistan."

Roth emphasized the importance of the overall community taking this sort of interest in the project. "The involvement of the broad campus community, including staff, faculty, students and community members, is what makes the book project so successful," she said. "It is the collective engagement of the sharing of knowledge and varied perspectives that brings richness to our dialogues about the book and its related themes."

The campus community is already gearing up its efforts for the book project, which last year included more than 40 events. This year, the program is set to kick off Oct. 17. Thus far, plans for this year include an Afghan-style kite-making event, a film series, book discussions, a lecture by Hosseini at Mondavi Center, an Afghan culture night and a traditional iftar (community meal) to be held in conjunction with the Islamic Center of Davis and Muslim Student Association.

The Kite Runner is on sale now at the UC Davis Bookstore for $9.95. Purchasing agent Paul Takushi said that approximately 600 copies had already been sold and more than 1,500 more copies will be ordered for the fall.