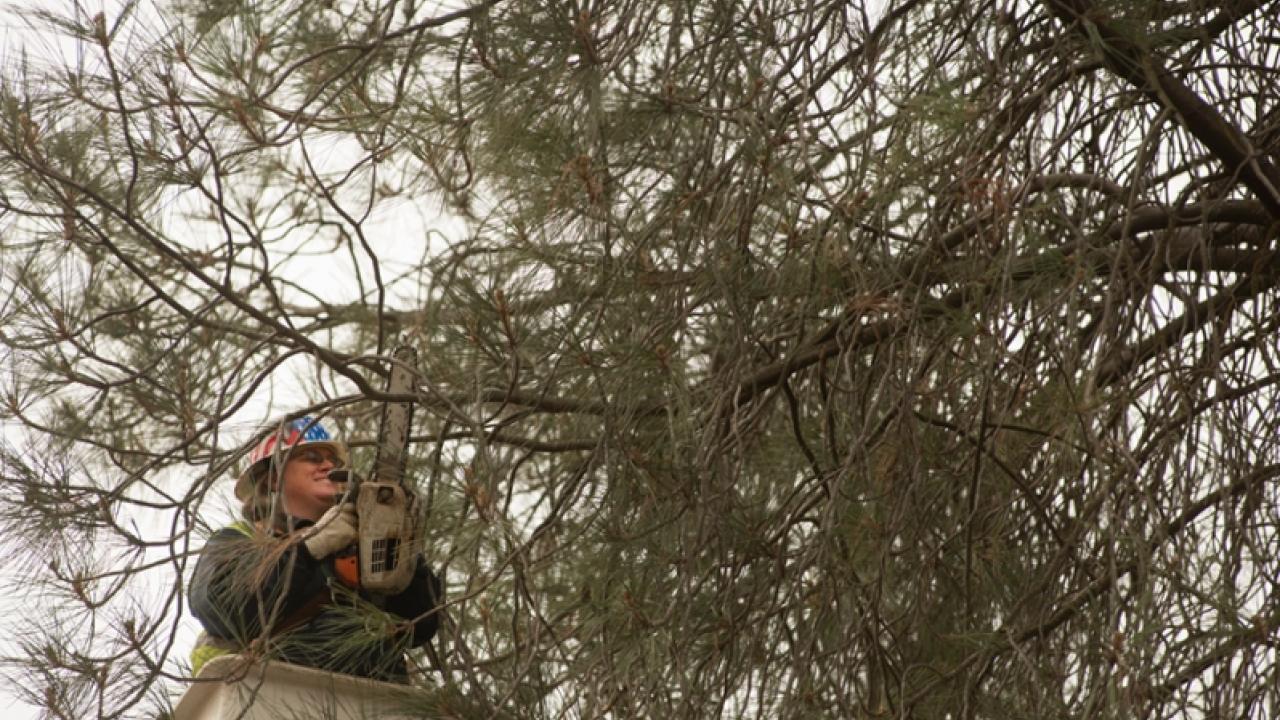 Bring on the rain: Campus ready for El Niño

To weather the big rains and high winds of what is anticipated to be a strong El Niño, UC Davis is preparing — from removing dead tree branches to clearing sediment from drainpipes.

And the campus needs your help, too.

"We need help on campus with eyes," said Cynthia Kranc, director of maintenance services in Facilities Management. "We can't be everywhere. We rely on our campus associates to let us know where there are problems."

When you spot a problem, report it to the Facilities Management customer support center at 752-1655. Calls are answered 24 hours a day, seven days a week.

To avoid damage going unnoticed over weekends or during holiday breaks, the campus may use the police department's Aggie Hosts — students trained in security — to walk buildings and monitor them for leaking roofs and flooding.

In mid-November, Jill Parker, associate vice chancellor of Safety Services, convened a group of representatives from more than a dozen campus units to coordinate planning and response for storms including wind and water damage and flooding.

Considering the lack of seasonal rainfall over the past few years, "it's exciting we're all able to talk about rain," said Phil Lacey, director of distribution services for the campus and one of those at the meeting.

The El Niño weather phenomenon is being closely tracked. The National Oceanic and Atmospheric Administration forecasts an 80 percent chance that the Sacramento Valley will see normal precipitation this winter and close to 40 percent chance of above-average precipitation.

One of the biggest challenges from winter storms is to keep water moving away from campus to prevent localized flooding.

Preparations began months ago. Providing some guidance are flood modeling maps from the master plan for the storm drainage system, approved in August 2014.

In other activities, utilities crews removed sediment from drainage pipes, and others staged sand bags in strategic areas.

Even now, grounds crews are trimming trees to reduce the hazard from falling limbs and picking up leaves to prevent them from clogging drains.

In addition to trimming trees, campus crews have been removing leaves to keep them from blocking storm drains. (Gregory Urquiaga/UC Davis)

"Aside from safety, our No 1 concern is making sure the labs and research are as protected as possible," Kranc said.

She said UC Davis crews in the trades, like roofing, are vital in response. "We're nimble and ready to go," she added.

As head of logistics on the Emergency Operations Center team, Lacey helps ensure the campus has what it needs to respond to emergencies.

He already has lists of vendors for things like water pumps and generators, but he's been putting in some time to make sure the campus is storm ready.

"I validate a lot of things that people say they have."

Student Housing has already disseminated its emergency plan to all housing managers, and it conducts monthly tests on its backup generators for residence halls and dining commons.

Ed Dunn, assistant director of operations for Student Housing, said the unit has also inventoried items that may be needed in the event of a severe storm. Those include thousands of glow sticks to give to students if a power outage outlives the batteries for its backup lighting in the halls.

Be storm ready at home

Rick Martinez, chief deputy for the UC Davis and city of Davis fire departments, reminds campus employees to keep their own homes storm ready, so they can keep themselves out of trouble and best help the campus respond to storms.