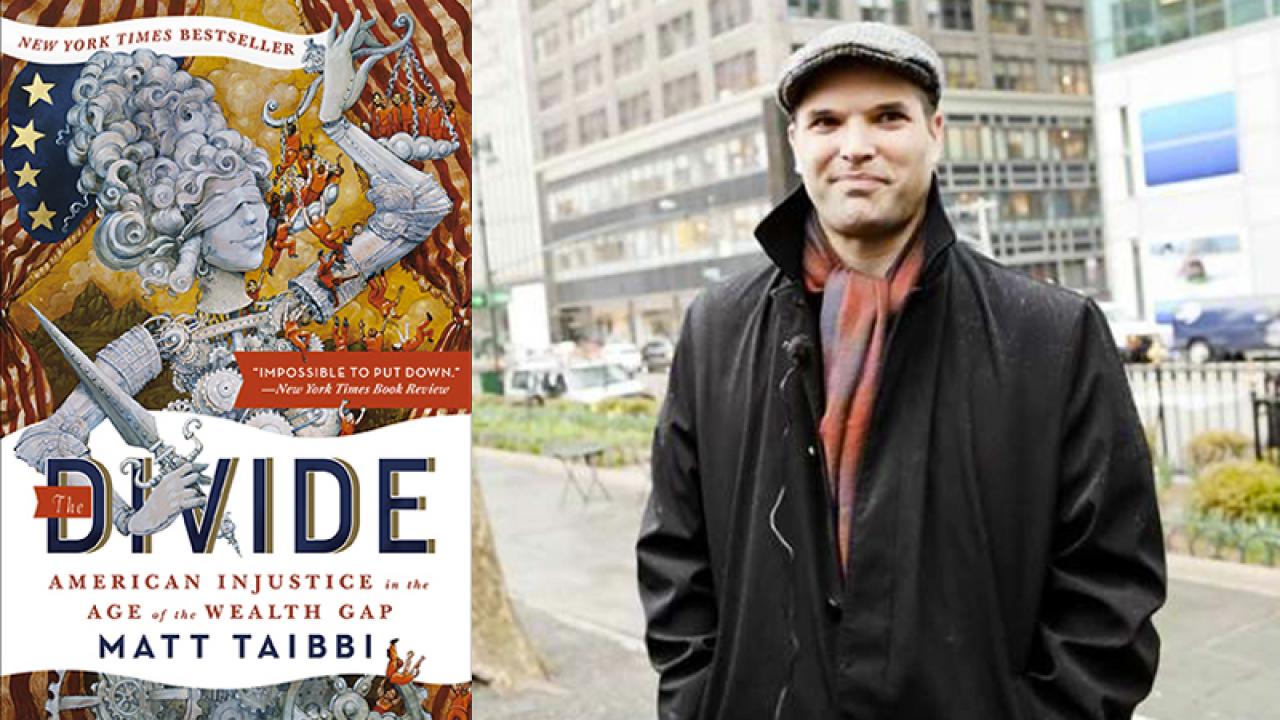 Matt Taibbi visits UC Davis this week to discuss his book The Divide: American Injustice in the Age of the Wealth Gap. It’s the 2015-16 Campus Community Book Project, which culminates with his evening talk at the Mondavi Center for the Performing Arts, Wednesday (Feb. 3).

Earlier the same day, Taibbi will participate in a free Forum@MC on the topic, “Movement of the Moment or an Old Battle Cry: Black Lives Matter.” Students, staff and faculty have been discussing topics like this one since we collectively opened Taibbi’s book in October.

Author’s talk — Same title as the book, The Divide: American Injustice in the Age of the Wealth Gap. 8-9:30 p.m. Wednesday, Feb. 3, Jackson Hall, Mondavi Center. Book signing to follow in the Yocha Dehe Grand Lobby. Tickets are available online or by visiting or calling the box office. It’s open from noon to 6 p.m. Monday through Saturday, and one hour before all ticketed events. Telephone: (530) 754-2787 or (800) 754-2787.

Other “Divide” topics have included “If You Cannot Afford One,” referring to access to legal representation; “Health Inqeuities and the Homeless”; “The Human Impact of Criminal and Immigration Detention”; “Understanding Differences in STEM Undergraduate Students, the Outcomes that Result and Hopeful Interventions”; “I Didn’t Even Get an Interview: Inequality in Job Searches”; “The Long Decline: U.S. Labor Market Inequality Before “Occupy”; and “Structural Inequality in our Nation’s Schools.”

Begun in the aftermath of the terrorist attacks of Sept. 11, 2001, the annual book project is meant to draw people together for discussion, in and out of classrooms, in special lectures and presentations, in casual conversations. And, in a place as diverse as UC Davis, the book project especially promotes listening to other people’s views.

In The Divide, published in 2014, Taibbi ponders a “bizarre statistical mystery” two decades in the making: Poverty goes up. Crime goes down. The prison population doubles. And, he says, not one of the new prisoners is among the rich whose fraud wiped out 40 percent of the world’s wealth.

“Most people understand this on some level, but they don’t really know how bad it has gotten, because they live entirely on one side of the equation. If you grew up well off, you probably don’t know how easy it is for poor people to end up in jail, often for the same dumb things you yourself did as a kid.

“And if you’re broke and have limited experience in the world, you probably have no idea of the sheer scale of the awesome criminal capers that the poweful and politically connected can get away with, right under the noses of the rich-people police.”

Taibbi’s other books include Griftopia: A Story of Bankers, Politicians and the Most Audacious Power Grab in American History (2011) and The Great Derangement: A Terrifying True Story of War, Politics and Religion (2009). He’s a regular contributor to Rolling Stone magazine and received the National Magazine Award for commentary in 2008.