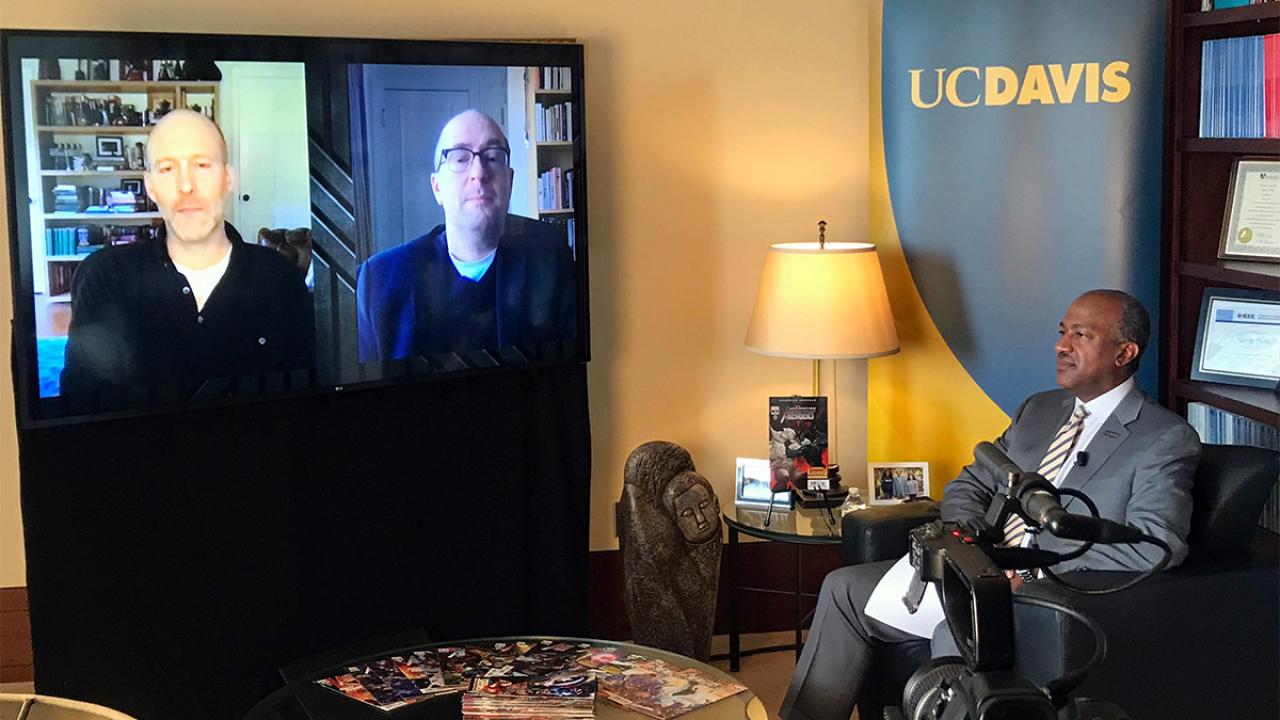 As writers for six Marvel Cinematic Universe films, they may be behind movies with countless explosions, fight scenes and supervillains, but UC Davis alumni Christopher Markus and Stephen McFeely know the story is still paramount.

“The spectacle is pointless if you don't care about the person involved in it,” McFeely said in conversation with Chancellor Gary S. May in the latest Chancellor’s Colloquium, Nov. 20.

Markus and McFeely, who met in UC Davis’ Creative Writing Program while earning master’s degrees from 1994 to 1996, were originally scheduled to visit campus May 18, but that event was postponed due to the pandemic. During their virtual return to campus, they discussed how the pandemic has changed their writing process, their comic-reading habits, favorite Marvel Cinematic Universe moments and more. All along the way, Chancellor May demonstrated his comics expertise and even showed off a few from his personal collection, which decorated his office for the occasion.

“I'm getting a cue to show you that I have The Avengers’ most recent issue with Moon Knight fighting Black Panther on the cover,” May said at one point.

The writers used Black Panther’s popularity as an example of the way that creating hit movies is a group effort. Because that film — which they did not write — was being shot at the same time as their stories for Avengers: Infinity War and Avengers: Endgame, they didn’t know audiences would literally cheer when they recognized the back of Chadwick Boseman’s head in Avengers: Infinity War. Boseman, of course, was playing the Black Panther, and moviegoers were excited to see him make his appearance in the film.

“It's so weird to talk about a movie that lives in the zeitgeist, which it so clearly did, and we never have that on our minds at all,” McFeely said. “We just have to do Page 72.”

They said the various Marvel movies are made better because different writers contribute different aspects.

“Everything's better when you have different, almost conflicting, voices contributing to it,” Markus said. “If the MCU was all written by one person, I don't think it would be as entertaining as it is, because part of the charm of the MCU is it’s espionage, ponderous, heavy, hilarious and all different things because they come from different creators.”

The writers also shared behind-the-scenes memories of Boseman, who died of colon cancer in August at age 43.

“I will say, all my experiences with that guy were, ‘I never met Chadwick, I met the king of Wakanda,’ because he stayed in character — or at least in accent,” McFeely said. “He never broke it when he was hanging around on set. So my fondest memory is, we probably had a half-hour conversation about Star Wars, as he’s in the Panther costume doing the accent.”

Effects of the pandemic

The pandemic has changed the way everyone works, and Hollywood writers are no exception. Markus said the pair has replaced their eight-to-10-hour writing and outlining sessions with much shorter Zoom calls.

“If anything, it's been tighter and more focused because you can only do about three hours on Zoom before your eyeballs melt,” Markus said. “Maybe it'll teach us to be a little more efficient [once we can write in person again].”

The writers and May all said they miss going to movie theaters, and Markus said he’s been passing some of his free time by reading comic books every day. He also recalled a box of old comic books an older cousin gave him as a youngster, including an Avengers story on traveling back in time to prevent a death, “which, in some way, was one of the seeds for Endgame.”

The pair met through Professor Emeritus Jack Hicks, who directed the Creative Writing Program when they were students. Hicks once wrote a note granting Markus permission to write comedy, and Markus still keeps it framed next to his diploma.

Markus and McFeely said their time at UC Davis taught them to write more precisely and to learn how to collaborate.

“The idea of the workshop and getting feedback from your peers was brand new to me as a 24-year-old guy who had not written much at all,” McFeely said. “That's the first time that I've poured myself into 10 pages, put it out in front of people and the people go, ‘meh.’ … It's basically all we do now — write, turn it to other people, people give us feedback, and do it over and over again.”