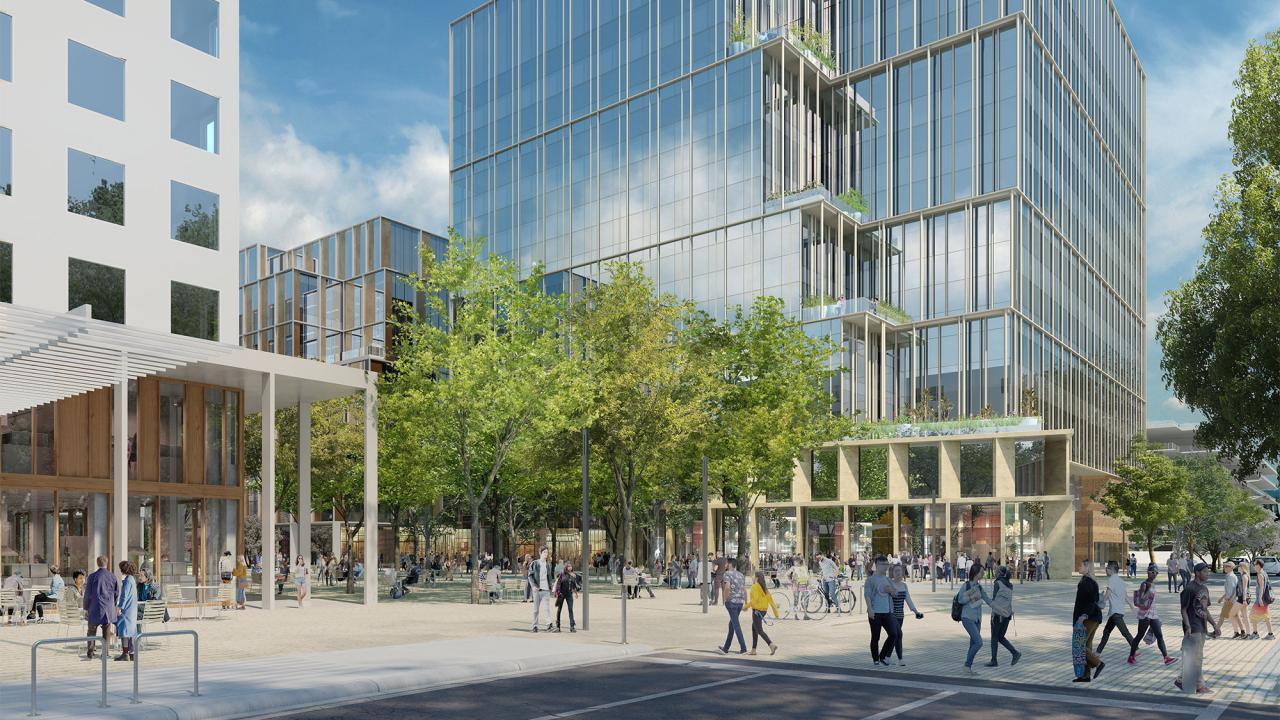 The City of Sacramento and University of California, Davis, issued the following news release today (March 25):

The Sacramento City Council is scheduled to vote April 6 on a groundbreaking Community Benefits Partnership Agreement (CBPA) to ensure the Aggie Square innovation district on the UC Davis Sacramento campus not only boosts the economy of the region but also provides meaningful access to jobs, affordable housing and other benefits for residents of the surrounding neighborhoods.

Crafted by UC Davis Chancellor Gary S. May, Mayor Darrell Steinberg and Councilmembers Jay Schenirer and Eric Guerra, the proposed agreement between the city, UC Davis and Wexford Science & Technology includes inclusive economic development measures that reflect community priorities, including: creation of an affordable housing fund with a minimum of $50 million for the Stockton Boulevard corridor; prioritizing local residents for entry-level and higher-wage jobs and providing training pathways to those jobs; and improving biking, walking and transit access around the UC Davis Sacramento campus on Stockton Boulevard. Beyond these commitments, an ongoing Aggie Square community partnership and fund will also be established, creating additional opportunities for community participation and partner accountability.

Scheduled to break ground in late 2021, Aggie Square is centered around more than 1.2-million square feet of public and private space that will be used for research and academic pursuits; support for start-ups launching new businesses; continuing education and job training. The development, where researchers are expected to do cutting-edge work in the fields of life science, technology and healthy communities, represents the largest potential infusion of well-paying jobs the city has seen in recent history and will be a catalyst for Sacramento’s post-COVID economic recovery.

Click here to watch a video about Aggie Square featuring Chancellor May and Mayor Steinberg.

The billion-dollar project is being built by Wexford Science & Technology, a leading developer of university-based innovation districts in such cities as Philadelphia and St. Louis, in partnership with UC Davis.

Unlike the typical university campus, Aggie Square will co-locate private industry and community organizations alongside university programs, creating an integrated hub for research, innovation and education. It will also include housing, teaching and training facilities, and public spaces for community meetings and events.

LETTER TO THE UC DAVIS COMMUNITY

“This is what inclusive economic development really means,” said Mayor Steinberg. “Aggie Square is the single biggest high-wage jobs and housing opportunity we have had in this city in decades. The Community Benefits Partnership Agreement is a promise to all of Sacramento that this transformational project will be for all, not just for some.”

Added Chancellor May: “Aggie Square is a platform for partnerships across the university, and with our city, our neighborhoods and innovative companies. And partnerships are the key to a stronger university, a diverse economy and more resilient communities.”

“We believe that Knowledge Communities, like Aggie Square, are most successful when the community is fully engaged,” said Jim Berens, CEO of Wexford. “We are pleased to be partnering with the city, UC Davis, and the community to create inclusive opportunities, economic mobility, and a center of innovation for all Sacramento residents.”

Vice Mayor Schenirer and Councilmember Guerra, who represent the neighborhoods surrounding Aggie Square, have worked for months with community members to create a strong Community Benefits Partnership Agreement that delivers on items important to existing residents.

“This could have been a UC Davis project, but thanks to the leadership of Chancellor May, it’s a UC Davis and community project,” said Vice Mayor Schenirer.

Councilmember Eric Guerra said he expects Aggie Square to improve the ability for young people growing up in Sacramento to stay in the city and get a good job.

“The combined commitments from the city and the Aggie Square project are a significant investment to provide housing and job opportunities for our neighborhood,” Councilmember Guerra said. “These investments will help support our small family-owned businesses along Stockton Boulevard who have endured through economic hardships as our corridors age and have suffered the most during the pandemic. This is a first step towards supporting the communities around the commercial corridor and will give our youth a future in careers in STEM related to health and biotech.”

The Community Benefits Partnership Agreement is expected to go to the City Council on April 6 alongside an agreement for the city to create an Enhanced Infrastructure Financing District (EIFD) for Aggie Square. The EIFD will allow the city’s portion of the increased property taxes created by the development of Aggie Square to pay for up to $30 million of infrastructure – a modest contribution for a long-term investment by UC Davis and Wexford expected to total more than $1 billion. Twenty percent of the funds generated through the EIFD will be dedicated to building affordable housing in the surrounding neighborhood.

One of the agreement’s major provisions is the commitment of more than $50 million to build affordable housing along the Stockton Boulevard corridor and to stabilize existing residential areas with such programs as down payment assistance and help with repairs. The fund will be comprised of at least $16 million present value ($29 million over 45 years) in property taxes from the EIFD, $29 million from the City of Sacramento’s Affordable Housing Trust Fund and the Sacramento Housing and Redevelopment Agency, and $5 million from a fundraising partnership of the city and UC Davis for anti-displacement programs in the adjacent neighborhoods.

UC Davis has also committed to building at least 200 beds of student housing as part of the Aggie Square project, with the primary goal of addressing the housing needs of undergraduates and graduate students and easing the demand for off-campus housing.

Job creation, job training and access to jobs for local residents is a major focus of the Community Benefits Partnership Agreement. For the first 10 years, UC Davis and Wexford have committed to filling 20 percent of the anticipated 3,500 to 5,000 ongoing new jobs at Aggie Square with nearby residents and members of communities of interest. After 10 years of operations, the goal will rise to 25 percent of expected new jobs. To achieve this goal, UC Davis, Wexford and the city will partner with community-based organizations, industry, workforce development groups, organized labor and community colleges to provide job training and a pathway for residents to access these job opportunities.

Progress will be tracked by a workforce metrics dashboard that will be made public and updated twice a year. The initial phase of Aggie Square will include a Lifelong Learning Building, which will serve as a focal point for the workforce training. A one-stop hiring solution will make it easier for local residents to identify and apply for jobs.

Separate from the Community Benefits Partnership Agreement, Wexford’s general contractor partner is completing an agreement with the Sacramento Sierra Building Trades Council to ensure that local residents, particularly those from adjacent ZIP codes, are hired to fill the potential 5,000 construction jobs needed to build Aggie Square.

The city and UC Davis have an agreement to work together to improve mobility and connectivity between the surrounding neighborhood and the campus and to use a variety of incentives to reduce the number of people commuting to the campus in single-occupancy vehicles.

UC Davis will contribute up to $1.1 million, or 50 percent, of the cost of funding improvements to the intersection of Stockton Boulevard and Broadway as recommended in the city’s Stockton Boulevard Corridor Study. The university will conduct a study to create better connections with surrounding neighborhoods and grant the city easements to build bike lanes and off-street parking along Stockton Boulevard. Wexford will build a new parking structure to serve Aggie Square and reduce the demand for on-street parking.

Aggie Square is a planned innovation hub on UC Davis’ Sacramento campus will be home to research programs, private industry partners, classrooms, student housing, and public-facing programs that engage local communities and entrepreneurs. The first phase of construction is scheduled to begin in 2021. This phase includes two buildings designed for science, technology and engineering, a classroom building dedicated to lifelong learning, and a building designated for housing and programs that focus on food and health.

To keep informed and engaged with Aggie Square, quarterly community forums are scheduled for June 16, Sept. 15 and Dec. 15. Updates are also regularly added to the Aggie Square website, aggiesquare.ucdavis.edu.

Wexford Science & Technology, LLC, is a real estate company exclusively focused on partnering with universities, academic medical centers and research institutions to develop vibrant, mixed-use communities. Wexford’s communities are built on a foundation of discovery, innovation and entrepreneurial activity that creates visible outcomes in the form of substantial economic growth, new and diverse jobs, and community transformation. Wexford targets strategic opportunities with top-tier research universities that are directly on or contiguous to dense, urban campuses. Presently Wexford has developed 15 Knowledge Communities across the United States.