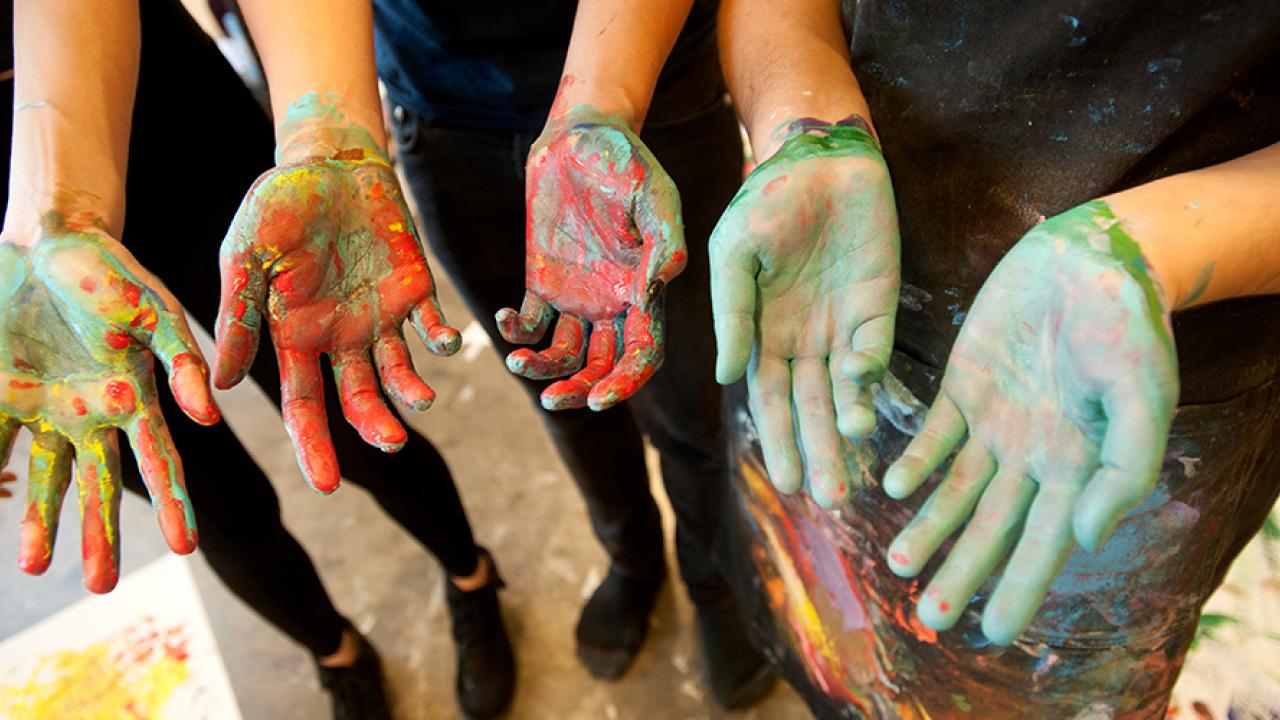 6 Ways to Find a Fulfilling Career for Art Graduate Students

Graduates of arts programs are often considered to be more creative and insightful than many of their peers, but would you believe they’re also among the happiest professionals?

According to several national and international surveys, artists are "are among the happiest professionals — reportedly happier than lawyers, financial managers, and high school teachers."

UC Davis offers a variety of graduate degrees in the arts through its College of Letters and Science, ranging from M.A. and Ph.D. programs in Performance Studies to the new MFA in Creative Writing, and many graduates of these programs go on to have unique, fulfilling professional lives.

Here are six alumni of UC Davis graduate programs who have careers that keep them smiling.

Artist, choreographer, writer, activist and ritualist are all words Keith Hennessy uses to describe his current job title. As artistic and executive director of the non-profit Circo Zero, Hennessy gets to wear quite a few hats.

Circo Zero has been described as one of the most prolific dance-performance companies on the West Coast. The diverse team of artists creates interdisciplinary, experimental performances motivated by movements for social, racial, gender and economic justice. They’ve racked up international awards and recognition in the process. The New York Times once described Hennessy in the director’s role as “an impressive improviser with a wiry forcefulness and a decided charisma.”

He says his favorite aspects of the job are collaborating with brilliant artists, traveling to international festivals, engaging with curious art and getting to sleep in most of the time.

“I realized that my generation of artists, and the one before me, had hugely expanded what's possible in academic research, practice, learning and teaching.”

Hennessy completed both an MFA and Ph.D in performance studies at UC Davis 2017. Having finished his finished his BA at age 40, Hennessy had a strong sense of his career path going into the graduate programs. Yet, “the years of study, production, conversation, and experimentation helped to expand and re-contour the path,” he said.

Empower students to use their talents for good

It wasn't long after graduating from UC Davis with a BA in history that Mary Anderson realized her two greatest passions were outside of history.

“I loved the arts and I loved doing service,” she said. “I started thinking, ‘How can I do both?’”

She found the answer while pursuing her MFA in 2007 and her Ph.D. in 2009 in performance studies. She could become a professor of the arts, working daily to uplift her students.

Part of Anderson’s role as Associate Department Chair in Theatre & Dance at Wayne State University involved founding and now facilitating the Performance/Exchange program. For 10 weeks out of the year, her students work in public schools in the Detroit area. They create a touring theater show, design an arts-based project that fits the students’ needs, and provide mentorship to younger students interested in an arts education.

Participate in every aspect of bringing a work to the stage, and learn from working professionals in the field, both through faculty contact, the Granada Artist-in-Residence program and special Mondavi Center for the Performing Arts events.

“The students themselves are extraordinary teachers,” she said. “I learn so much from them every day.”

Tony Shayne said earning a BFA in cinematography helped him learn the mechanics of live performance, but it didn’t exactly make him feel like an artist. He wanted to have a greater role in the most compelling works.

By the time he finished his MFA design program in 2009, Shayne had enough experience to try anything. He’s since worked with organizations like REDCAT, Yerba Buena Center for the Arts and Holland America Cruise Lines. He currently serves as the production manager for ODC dance company, teaches at Stanford University and will travel to Panama and Korea for work this spring.  For Shayne, being a lighting designer is more than just a career-- it’s a way to influence meaningful thought as an artist.

“I think there's nothing more real than a live performance,” he said. “It's provocative and stimulating, and I do my part to contribute to that.”

Timothy Orr had been working professionally as an actor for 10 years when he decided to pursue his MFA, hoping to open himself up to more diverse opportunities.

“The program is very cross-disciplinary. Even though I was focused on acting, I had to study and learn design and directing and film and dance and all these other disciplines,” he said.

It didn’t take long for that well-rounded education to pay off. After finishing his MFA in performance design in 2007, Orr began acting with the Colorado Shakespeare Festival. By 2013, he was named artistic producing director.

In planning a festival that draws 25,000 viewers every summer, Orr says he has to “communicate and be creative with every single discipline that intersects with theater: designers choreographers, actors, directors -- even those in the world of design, scenic lighting, costumes and sound. What I did as a graduate student at UC Davis was invaluable preparation for my current career.”

Connect with your community

Jose Arenas earned his MFA in art studio in 2000. He now works as the Associate Director and Chief Curator of the Taller Arte del Nuevo Amanecer, or TANA, a fully equipped silkscreen studio, exhibition space and teacher center in Woodland, California. TANA is an extension of the Chicana/o Studies department in the UC Davis College of Letters and Science.

In addition to overseeing exhibitions and coordinating a visiting artist program, Arenas teaches a mural workshop class in Chicana/o Studies at UC Davis and assists in the overall planning of community-centered cultural events.

“I’m thrilled to serve and be part of an environment that engages community participants in the silkscreen process while centrally connecting the art making practice as a medium for social change,” he said. “Community members are actively engaged in the creative process and empowered through the creation of beautiful, thought-provoking and politically engaged posters that speak to the surrounding community and our world today.”

See What Else You Can Do With Your Major

Hear from Aggie alumni about their career paths, and we’ll help you develop your own using our many academic programs.

Arenas didn’t always imagine teaching as his career path. An accomplished painter, he began his MFA program seeking critical feedback from his peers and deeper thinking about his own artistic practice.

But as he worked as a teaching assistant for various courses in the art department, he fell in love with helping students explore their own creative voice.

“I decided to continue my path of becoming a professional artist and also pursue of a career in higher education,” he said. “Being in service of others has been deeply rewarding and a complement to my own creative professional endeavors as I continue to produce artwork.”

His paintings, which contemplate the displaced feeling of growing up in both the U.S. and Mexico, have been exhibited throughout the United States, including galleries in New York, Los Angeles, Chicago, Miami and San Francisco.

Live your art every day

“What’s not to love?” Lisa Rybovich Crallé says of her career. “I feel incredibly lucky to be able to make a modest living teaching and making art.”

Crallé earned her MFA in studio art 2011. She currently teaches sculpture at California College of the Arts and exhibits her own pieces across the U.S. Her work incorporates drawing, painting and sculpture into installations or collaborative performance projects. She also co-organizes Heavy Breathing, a series of experimental, critical theory seminars that feature artist-led fitness.

It wasn’t a straight path to becoming a professional artist, Crallé said. Her decision to pursue her MFA stemmed from feeling nostalgic for her school days.

“I missed academia -- the structure, the community, the feedback and the space to focus on my research and my practice,” she said. “Unlike many graduate degrees, the value of an MFA is tricky to quantify. However, I experienced a surge of energy and confidence while in graduate school and I'm certain that many of the first opportunities I was offered were a result of that focused energy.”

In the years since, Crallé has been invited back to UC Davis as a lecturer, traveled to Finland as an artist in residence, earned sculpture commissions from the West Coast Craft’s Artist Commision Project and created a 1,500-foot-long sculpture for the grand opening of UC Davis’ Jan Shrem and Maria Manetti Shrem Museum of Art.

See What Else You Can Do With Your Major

Emily M. Olson is a writer and content contributor for Graduate Studies and Global Affairs at UC Davis.