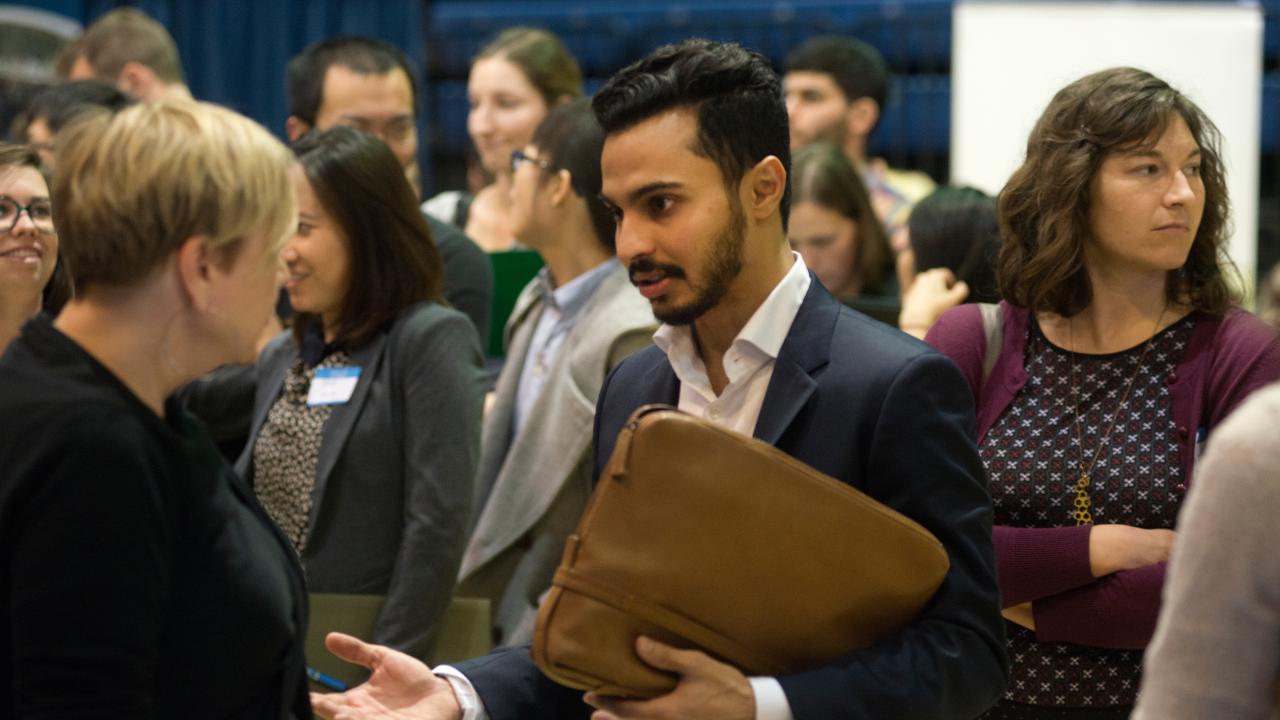 5 Ways to Impress Employers at Your First Career Fair

How to Win Big at Your College Career Fair

I know what you’re thinking: As if I didn’t have enough studying to do already with all of my classes. Now I’m lumping something else on your schedule. Fact is, you have to study to get the most success out of the career fair as possible — as you would with any important midterm.

Lynn Fowler, senior career advisor at the Internship and Career Center (ICC), shared some tips with me:

“We want people to come in with confidence and enthusiasm,” Fowler says. “Students should definitely do the research so they know who's coming and they can make a list and prioritize who they're going to talk to. They're much more likely to have a great conversation if they've done some research in advance so that they can engage that employer. That employer is going to be much more excited about them if they show they looked into their company and their positions.”

It’s also important to update your resume or create one if it’s your first time. If you don't know where to start, the ICC offers a lot of free resources about resumes.

UC Davis fourth-year Tyler Gibson shared with me something he is going to consider for next time.

“The companies there were all a little different in their own way,” Gibson says. “I would try to have multiple resumes that show off different strengths and skills depending on the company or position.”

Need some help with all this? Well, you’re in luck. You can go to an ICC workshop to prepare for the fair, Fowler says. “It's about an hour long and we take students through exactly what to expect and how to prepare before the fair, what to do during the fair, and how to follow up after the fair.”

There’s a certain level of professionalism that is expected of you at certain events — job interviews, final presentations, conferences, scholarship banquets, the list goes on. The same goes for career fairs. You want to put forward the best and most prepared version of yourself to potential employers, regardless of whether you’re expecting to actually interview or not. It’s good practice, and you’ll be used to it when the time comes to look your absolute best.

Not to mention, dressing sharp could have some added benefits beyond fulfilling a dress code.

Now, don’t think that you have to go out and break the bank on an expensive suit or outfit. It’s absolutely possible to get some simple staple pieces to make up a professional getup on a student budget.

If you need some inspiration or a quick refresher, the ICC has put together a Pinterest board of business formal wear!

Ah yes — the oft-mentioned and all-important aspect of networking. I’ll be honest, I really hated this word for the longest time. It always had such a jargon-y sound to it, and people never really explained the concept after shouting at me about how important it was. So, I was always anxious that I wasn’t doing it enough since I didn’t even really “get” it.

First, let’s go ahead and break it down in a simple definition.

Networking is engaging in conversations, establishing relationships and exchanging knowledge with people for the purpose of developing professional contacts.

Even after I had the definition I still wasn’t very confident about how to go about it. Was I just supposed to work some magic in a three-minute conversation that resulted in this person giving me the secrets to success or an exclusive opportunity that nobody else had access to?

Well, it turns out I was setting my expectations too high for how much I could accomplish in a single interaction. While it’s important to make a good impression on somebody when you first meet them — by sharing your experience, goals and illustrious personality — the real key to networking is in building upon those first interactions to form a relationship.

Think of it this way: Have you ever met someone just by striking up a conversation or by sitting next to them in class, who then introduced you to their friends, who introduced you to their friends? Next thing you know, you’ve met all sorts of people — and some of them end up becoming your friends, roommates or partners. That same basic concept applies to professional networking!

Lynn Fowler says it gets easier with practice:

“The more that students can take those opportunities to talk with employers to get comfortable having those career development relationships, build those relationships, the better their job or internship search process is going to be,” Flower says. “They’re going to be more informed, and they're going to have more connections to those industries so they can find that opportunity they’re looking for.”

What happens if that person can’t personally help with the position or job you’re interested in? Here is where the “network” part really comes into play.

“A company may be recruiting for a position a student doesn't want or isn’t relevant to their career goals,” Fowler says. “You should still talk to that representative and find out how to connect. Maybe you can ask for a contact for someone else in the company that does more of what they're looking for. Networking is so important!”

Another thing to keep in mind is to keep them open — your mind and options, that is.

“Students should come with an open mind to the career fair and see what is out there,” Fowler says. “They might get exposed to some things they didn't even know existed.”

In fact, this is probably the most common sentiment I heard the most from recruiters and staff during my day at the career fair. It’s easy to see why we put ourselves in boxes or have very specific expectations of our careers. After getting into to college, declaring a major, succeeding in classes, we’ve built a large portion of our young adult lives around specific steps and requirements. However, careers are less structured.

“I think a lot of times kids that I talk to, coming out of college — they have an idea of what they want to be, and there's this image, and they feel like they have to attain that whether they get that from their their parents or from outside sources. They don’t listen enough to what makes them happy and what they want out of their lives, and I think you’ve got to be open to that and you got to be open to that changing throughout your life. Things happen and you’ve got to change your perspective.”

Although companies may seem to focus on a specific field or career, they might have more positions or opportunities available. It’s a good idea to still engage with a company, even if you don’t think your major is what they’re looking for. There are a lot of different jobs — even at a company that might seem to skew toward certain roles, like wineries.

“We're a combination of chemistry, engineering, we’re data and databases, we’re computer science. We’re a lot of things,” says Tom Dodson from Pernod Ricard Winemakers. “I think a lot of people see us from a very linear lens and think ‘it's just winemakers making wine,’ but it takes a lot of people with different skill sets to actually make the wine.”

So remember to not let your expectations keep you from exploring different opportunities or companies. You might just find something you weren’t expecting!

At the end of the day, you need to remember that you’re a tremendously intelligent and gifted person with a lot of potential. You’re an Aggie, after all! So breathe, believe in yourself, get out there and show the world what you got.

Salvador Cruz is a recent UC Davis graduate in managerial economics and psychology. He's also a social media marketing intern at the university. Find him on LinkedIn.