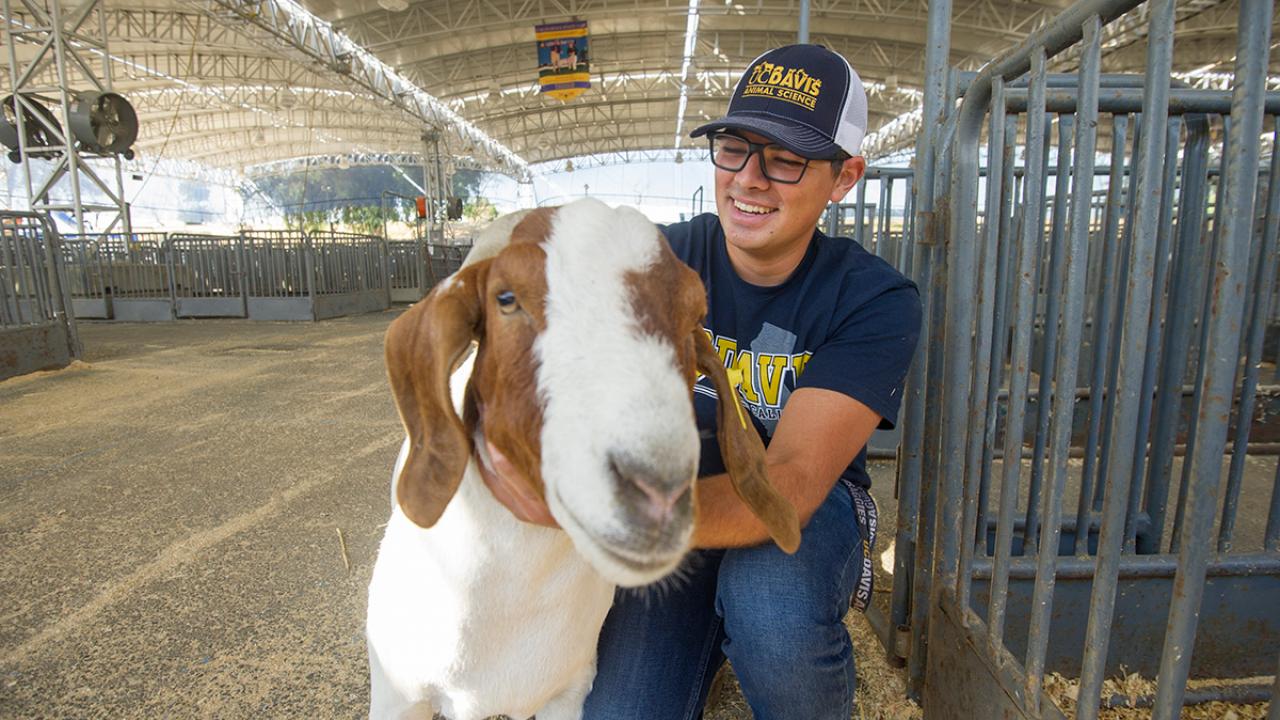 UC Davis has three majors that start with the word “animal” — animal science, animal science and management, and animal biology — and it can be confusing to students interested in getting an education in the field.

After all, the three majors are all housed in the College of Agricultural and Environmental Sciences and are very similar in some of their requirements:  English and writing, General Education, and lower-division preparatory coursework requirements in the physical sciences.

A common question posed from not only continuing and prospective students, but community college counselors and parents as well, is: What is the difference? The three focus on science coursework: general chemistry, general biology, organic chemistry and calculus.

Depending on what students want to do in their careers, however, they can find unique classes and experiences to prepare them specifically for their career path.

See which major matches your goals:

Becoming a veterinarian isn’t the only career possibility with this animal major. Read about living in our barns in exchange for animal care, internships and career possibilities. The Department of Animal Science also holds a career symposium each year.

The animal science major, housed in the Department of Animal Science, focuses more on the anatomy and physiology of animals as well as the production of livestock for human use.

This is a popular and appropriate major for students preparing to apply to schools of veterinary medicine because the curriculum includes courses such as animal selection and breeding, animal biochemistry, and animal physiology. This is also a very large major, currently with more than 1,300 students participating.

This curriculum prepares students in this major for managing large production facilities such as dairies, breeding operations or kennels. Very few students use this major to prepare for applying to schools of veterinary medicine because much of the prerequisite coursework housed in the animal science major is missing from this major. Students in animal science and management need to add the classes for veterinary school to their academic plan if that’s their career goal. And that would increase their time to getting a degree.

Animal science students have many different course choices, including classes taught in other departments such as Wildlife, Fish and Conservation Biology and Evolution and Ecology. Some classes are also taught through the School of Veterinary Medicine. For animal science and management students, these courses are limited to a predetermined curriculum of animal science courses including a capstone course, “Enterprise Analysis in Animal Industries.”

Students in both majors have internship opportunities at our animal facilities, the School of Veterinary Medicine and in neighboring communities. They also have research opportunities with the animal science faculty.

No matter which animal major students choose in the Department of Animal Science, they will find a common goal: the care and welfare of animals.

The animal biology major prepares for a career in postgraduate research

The animal biology major specifically caters to students seeking a career in research focused on the biology of animals. This major, housed in the Department of Entomology and Nematology, educates students intensively in the natural sciences, with a heavy emphasis on methods for finding new information about animals.

In animal biology, the process and principles of science, and concepts in research methodology receive the highest priority. And almost all animals are studied: Only humans, bacteria and viruses are excluded.

This major places priority on seeking solutions to conflicts between the needs of animals and the human enterprise, such as agriculture or advancing urban areas. Research areas range from animal behavior and systematics to reproduction and wild animals in captive settings.

Students will take core biological sciences courses that build on animal biology from molecular foundations to the ecological and evolutionary levels of organization. After completing the core courses, students design their own academic program based on their postgraduate plans.

The program includes a research project of the student’s choice, completed under the guidance of a faculty mentor. By graduation, every animal biology major engages in the whole cycle of the scientific process and completes an often publishable manuscript detailing his or her efforts and results.

Animal biology majors can plan on careers in veterinary medicine and research; governmental regulation; education; research in animal biology and ecology; and management in global animal conservation and captive animal welfare. Many have also entered graduate or professional studies in other biological disciplines. Read more about the differences in this FAQ.