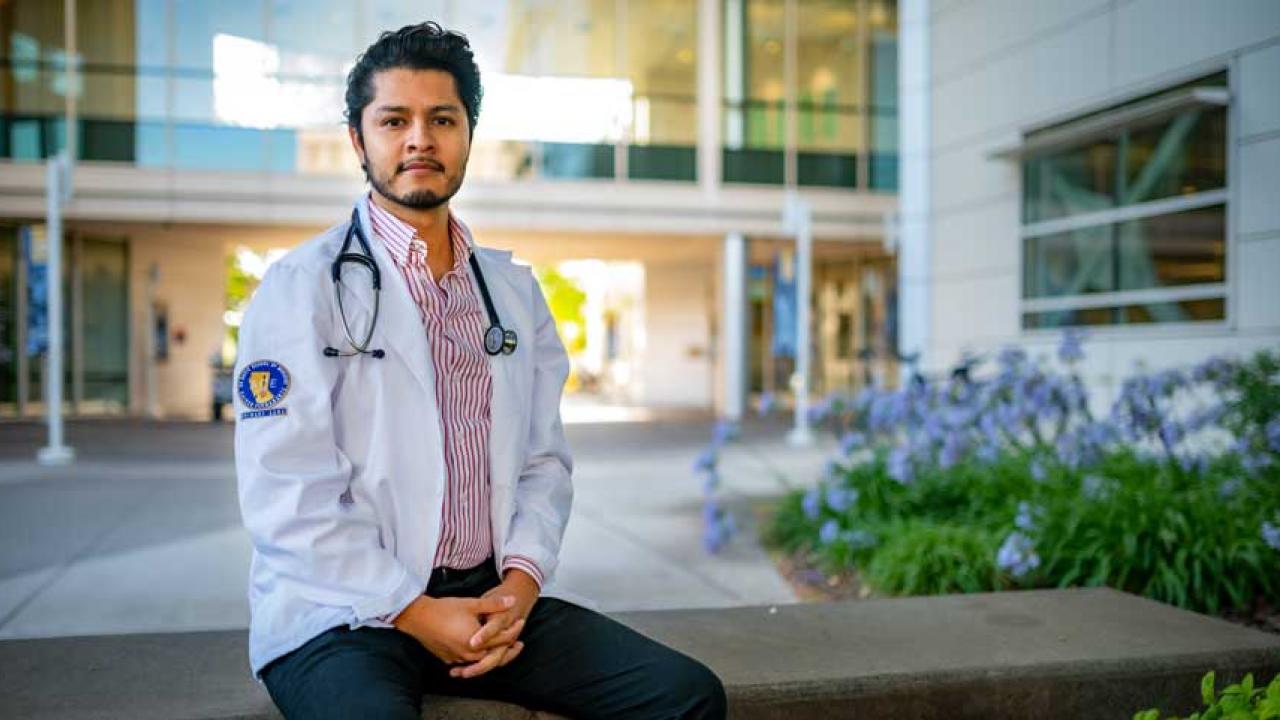 How Does a DACA Student Navigate Med School?

Edgar Velázquez has taken an unconventional route to medical school.

His story begins in Mexico, where a ruined economy forced his parents to flee their beloved colonial hometown and move to the United States, leaving their children behind. As a pre-teen, he crossed the border in a heart-pounding effort to reunite with his parents in San Francisco where nine family members lived in a tiny apartment. He started high school unable to speak English. In college, he financed his undergraduate education by washing dishes late at night in restaurant kitchens.

Now in his second year at the UC Davis School of Medicine, Velázquez is determined to become a primary care physician.

Despite making it this far, he faces one more obstacle, and it’s unrelated to the rigors of school: Velázquez is among at least 650,000 young undocumented immigrants known as DACA recipients who have temporary protected legal status until officials in Washington, D.C., decide the fate of the politically controversial program.

Velázquez, who describes himself as being “in a constant struggle for survival,” is scared and anxious about his future if the federal government eliminates the Deferred Action for Childhood Arrivals program.

“I have to worry about whether I’ll be able to continue medical school moving forward,” he said.

“I worry about my future in residency; if DACA gets taken away, I cannot become a doctor, and I cannot fulfill my dream of going back to my community and serving the underserved.” — Edgar Velázquez

In the best-case scenario, DACA recipients, some of whom were brought to this country as undocumented immigrants, will be given permanent residency and a path to citizenship. Under the worst-case scenario, they will be deported to the countries where they were born.

The U.S. Supreme Court attempted to sort through the issue last month when it responded favorably to a lawsuit by the University of California Regents, which sued the Trump Administration for its attempt to end the program. But while the court blocked the federal government from dismantling DACA, the ruling did not prevent the administration from trying to eliminate the program using a different justification.

Velázquez tries not to think about the uncertainty, which could be resolved, or worsened, by the upcoming presidential election.

“Whenever I’m anxious about DACA,” he said, “my place of comfort is studying.”

Reuniting with his parents

Velázquez was born near Lagos de Moreno, a semi-rural city in Jalisco state a couple of hours from Guadalajara. His father owned a small construction business and his mother was a homemaker. Leaving Mexico was never in the family’s plans.

But when the peso lost traction to the dollar in 2000, the construction company went bankrupt and Velázquez’ father sold the house in a futile attempt to save the business. Unable to find jobs, his parents migrated to San Francisco, settling into a 418-square-foot apartment in the Tenderloin District with extended family. Months later, Velázquez’ two sisters moved up.

Velázquez then took the perilous journey himself. He was only 12.

He was told that if the crossing failed, authorities would send him to an orphanage and he wouldn’t see his parents for a long time.

“It was pretty scary,” Velázquez recalled.

He made it through. On the last part of his journey, aboard a Greyhound bus on the Bay Bridge, Velázquez marveled at how much San Francisco “looked like the city from Batman.”

He attended a San Francisco middle school for a couple of months and then summer school to complete eighth grade.

He enrolled at June Jordan High School, even though it was an hour away on three public buses, because his father was intrigued by a flier he noticed that promoted computer use at the campus.

Velázquez recalls the first day of school when his English teacher asked students to introduce themselves. “My name is Edgar, and I don’t speak English,” he said, prompting laughter from the class at a time when he wasn’t trying to be funny.

After that, Velázquez became obsessed with improving his English. He made it a habit to read billboards on the way to school; study at the Civic Center library on weekends, along with his sisters; and do homework in the bathroom of his family’s crowded apartment.

Discovering a passion for science

Velázquez excelled in math (“because I didn’t need English for it”) but also was drawn to science — moreso after a teacher nominated him for a summer research program at UC San Francisco right before his senior year.

On the first day of the program, still self-conscious about his accent, Velázquez quickly noticed that scientists hailed from all over the world, “and their accents are thicker than mine!” Lying on the floor of the apartment each night, which had no beds, he began to envision himself as a scientist.

Yet, one question kept nagging at him: How can scientific discoveries help the people in his underserved neighborhood, where the homeless slept outside his building?

He applied to 20 universities, including Ivy League schools that he didn’t realize were prestigious, and gained acceptance to nearly all of them. Being undocumented, however, limited his choices because he couldn’t easily access grants, scholarships or jobs.

In one such program he met a doctor named Sharad Jain, a professor of medicine at UCSF and director of the primary care residency program at Zuckerberg San Francisco General Hospital.

“I was completely impressed with him at our first meeting,” Jain said. “He was a student with confidence, determination and vision, who was committed to working hard to achieve his dreams.” Jain invited Velázquez to shadow him in the hospital and had no doubt Velázquez would one day become a doctor.

But for a while, school wasn’t going so well for Velázquez.

He found it hard to study, let alone stay awake. He was working up to 18 hours a day in various kitchens to pay for his studies. Somehow, he found time to volunteer as an interpreter in community clinics.

After struggling through pre-chemistry and distraught by his mother’s cancer diagnosis, Velázquez felt his dream of becoming a doctor was slipping away. He decided to take a year off from school, but also determined “to come back bigger, better and stronger.”

When he resumed classes, and his mother recovered, Velázquez had changed his study habits and was now pulling a 4.0 grade point average. In 2012, the Obama administration created DACA, which provided Velázquez with a work permit, allowing him to apply for work more meaningful for his career.

Velázquez was offered a job by his pre-chemistry instructor, helping teach the same class he had previously failed.

“Within a week, I went from washing dishes and cooking at a restaurant, to being the facilitator for an undergrad course on chemistry and physics,” he remarked.

He graduated from San Francisco State in 2016, six years after he started, and three years later got accepted to the UC Davis School of Medicine and its highly competitive, three-year compressed medical school program. The ACE-PC program, short for Accelerated Competency-based Education in Primary Care, carefully selects students who are committed to primary care and can withstand the strain of an accelerated curriculum.

“Edgar brings with him academic excellence, incomparable work ethic, and passion for primary care,” said Alicia González-Flores, who helps administer ACE-PC. “His journey and the obstacles he has overcome prepared him for a challenging track.”

Jain, who is now associate dean for students at UC Davis School of Medicine, calls Velázquez “a true example” of the type of student whom UC Davis values to achieve its mission of improving lives and transforming the health of the communities where the future doctors will serve.

“Edgar inspires me because, to me, he has entered the profession for all of the right reasons: He is committed to service, to health equity, and to improving the health of his community. He has shown resilience and commitment to this journey.”

And despite the many obstacles, Jain says, Velázquez has remained committed to his goals.

“Edgar has a broad view of his responsibilities to his community, and he will most definitely be a leader in helping his patients both through direct care and larger advocacy efforts.”

These days, Velázquez is taking the medical school’s virtual courses in psychiatry, neuroscience and pharmacology. He’s also caring for patients at Kaiser Permanente in Roseville and Sacramento, through its partnership with ACE-PC.

The one thing he’s not doing is Googling for news about DACA first thing in the morning, which he did for the past three years, until recently. “It’s too frickin painful, it was messing with my mental health.” Not to mention interfering with his studies.

Although he can access scholarships and loans, Velázquez knows the funding sources may run dry at some point, depending on what happens with DACA.

“There’s so many students and so many allies who did all this work in the past few years, and we just have to continue the fight,” he said. “I may not be able to vote, but I still have a voice and want to make sure my voice is heard.”

Velázquez said his future depends on it.

This story originally ran on the UC Davis Health site.

Related blog:  What Happens if We Force Foreign Students Out of the Country?