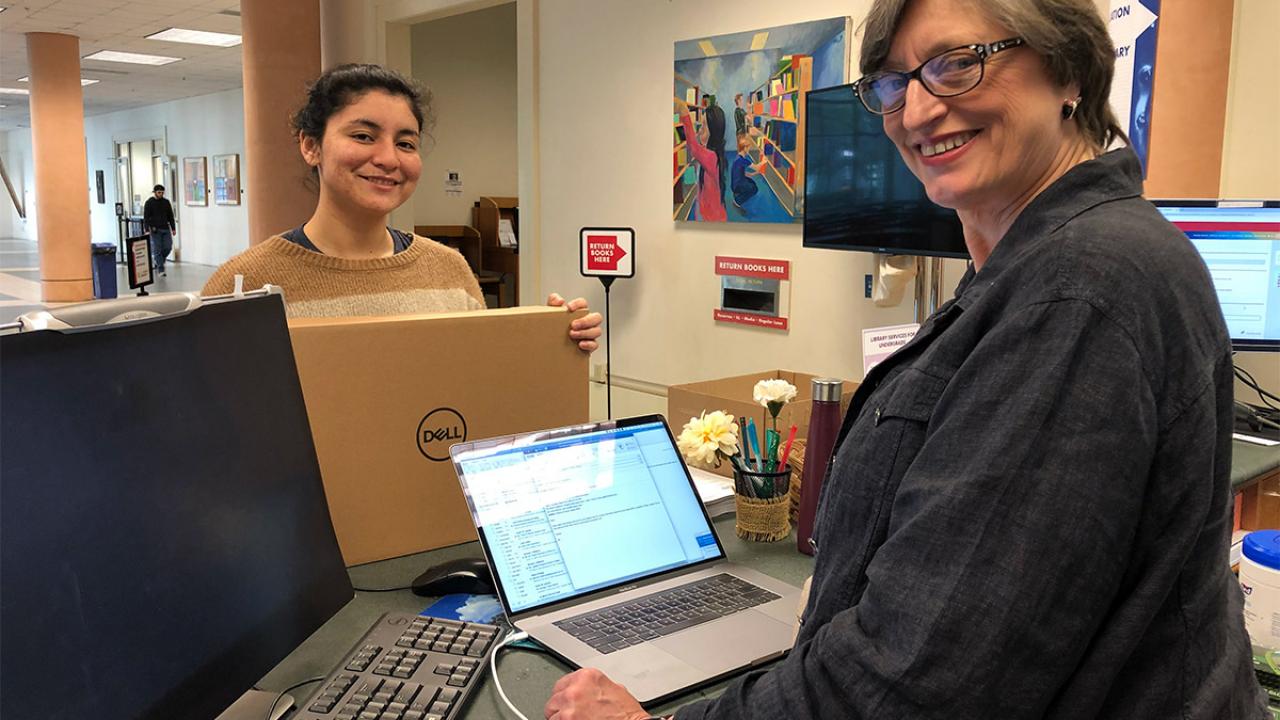 IET, Stores and Donors Contribute to the Cause

Staff and units from all around campus are teaming up to ensure students without computers of their own can continue to learn as instruction moves online.

“This is a process and a service we don’t have established at UC Davis,” said Anita Nichols, director of Client Success for Information and Educational Technology, or IET. “Every time I reached out to another organization for help, they provided it.”

The process started last week with the concern that IET’s computer labs might not be able to keep up with the demand after the administration canceled in-person finals. No problem, right? We could just buy more computers. Not exactly. Universities all over the country were doing the same thing, and businesses and organizations were snapping up computers, too, for employees newly assigned to work from home, as the nation tried to slow the spread of COVID-19.

So, IET looked locally, receiving 50 laptops from Aggie Surplus — “retired equipment from around campus” that needed to have new operating systems and applications installed before they could be used, Nichols said. Staff members scrambled over the weekend to have them ready for the first day of finals, and on Monday (March 16) they were in the Student Community Center and ready to be used. They’ll remain there through this weekend.

Meanwhile, the department realized computer labs might not be a viable long-term solution for students isolating at home and began looking again for laptops to purchase. The department’s first order was canceled, and then when UC Davis Stores helped IET find 600 computers to purchase, their delivery was delayed — first by a snowstorm in the Sierra Nevada, and then so the freight company could deliver medical supplies instead.

Finally, seven pallets of laptops arrived on campus. But IET doesn’t usually loan computers to students, so it had to create how-to articles, draft a liability form with the help of Student Judicial Affairs and the Office of the Campus Counsel, identify students already receiving financial aid who might also need a laptop, and plan a way to check out and track them.

HOW TO GET A LOANER

The check-out process will resume at the start of spring quarter, and Nichols is hoping to hear from more of the 10,000 students who received emails from Financial Aid informing them they were eligible to receive one of the loaner laptops. Interested students (who received an email from Financial Aid) should respond to laptopcheckout@ucdavis.edu.

Along the way, assistance came from numerous other campus departments and units, like Development and Alumni Relations, which heard about the effort and offered to cover the cost of the laptops from the Annual Fund, which is funded by donors.

“It all happened so fast,” Nichols said.

IET distributed 50 laptops as finals week wrapped up, March 19 and 20, at Shields Library. Students who check out the laptops can use them free of charge through spring quarter.

Nichols said the process has been very rewarding, especially for a campus unit that usually works behind the scenes with little face-to-face contact.

“A student who walked in to the library said, ‘You have no idea how grateful I am for this,’” Nichols said. “’I don’t know what I would do if it weren’t for UC Davis.’ It brought tears to my eyes.”