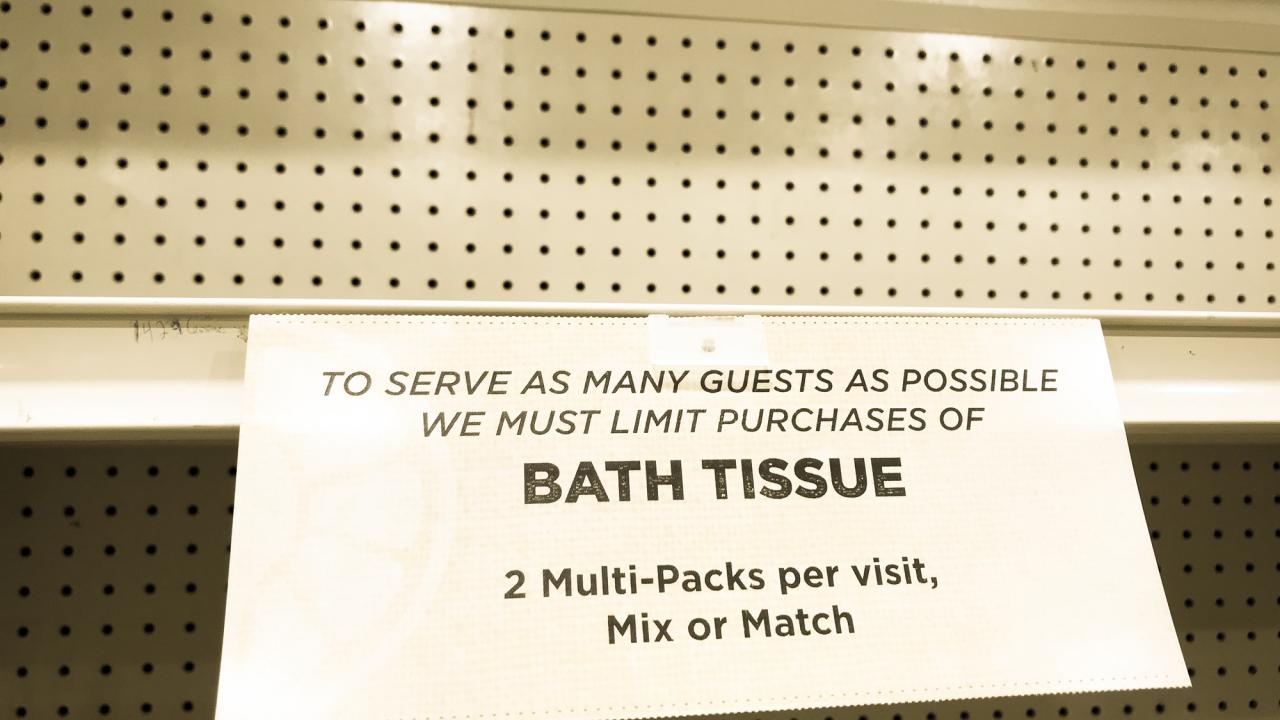 Hoarding is wrong, and you should not do it, all our experts agree. But the reasons people are overbuying — and that you cannot always find toilet paper, milk, eggs and cleaning supplies after several states issued shelter-in-place orders — are complex.

Experts at the University of California, Davis, one from the Graduate School of Management and the other a psychiatrist, agreed there was some messaging by political leaders and others that scared people into overbuying. Wednesday (March 25), they were in conversation on this subject with news anchors at Sacramento television station KCRA.

Another UC Davis professor analyzed the law and found that hoarding is not necessarily illegal.

Don Palmer, professor in the Graduate School of Management, who has expertise in organizations, said his expertise moves around the edges of the current pandemic. He has opined about the hoarding issue recently.

“Commentators often portray people as irrational when they rush to the store and buy everything in sight, calling it ‘panic buying.’”

“But in this case,” he said, “most people were likely acting rationally.”

“Public health and political figures issued pronouncements exhorting the public to make sure they had a 30-day supply of necessities.,” Palmer said. “So people went out right after the pronouncements and purchased abnormally large quantities of the things they usually purchase. The fact that this mass buying often resulted in rising prices made matters worse. Those who live paycheck to paycheck — and there are many in our society — likely were particularly quick to shop, because they could least afford the rising prices.”

He said in a recent interview: “I think the hoarding and the panic buying is a product of a number of things, one of which is the fact that when you are not getting a message which you can trust about the situation, you are left to figure things out on your own. One way to figure things out on your own is to say, ‘I’m going to imagine the worst.’”

Bad for the community

Peter Yellowlees, chief wellness officer at UC Davis Health, and a professor of psychiatry, said in an interview in Salon that the message that isn’t getting out is that “we will get through this. … And people are going to need to help each other, and one way to help each other is not to hoard large amounts so your neighbors have nothing … .”

Some hoarding may be illegal

Federal law provides for restriction of hoarding, and it may soon come into effect, said Gabriel “Jack” Chin, a professor of law who teaches criminal procedure. “For purposes of national defense, the U.S. Code allows the president to designate certain things as ‘scarce materials’ and restrict accumulation ‘in excess of the reasonable demands of business, personal, or home consumption as he deems necessary,’” he noted.

As it happens, President Trump issued an executive order this week delegating authority to the secretary of Health and Human Services to designate items under that law. The concern, though, is about “personal protective equipment and sanitizing and disinfecting products,” Chin said.

If HHS acts, the federal government may be able to take legal action against individuals or corporations for hoarding these essential goods. But consumer goods such as toilet paper or food are not likely to be designated as scarce materials, Chin said.

As for buying goods and making a profit on reselling them, the current law only really applies to businesses, not individuals, he explained.

California passed a law after the Northridge earthquake in 1994 against price gouging. It applies during a national, state or local emergency declared based on an outbreak of disease or for almost any other reason, he said. Aimed primarily at businesses, it prohibits them from selling​ products or services at more than a 10 percent increase of the pre-emergency price, unless the seller can prove that a greater price increase is based on increased cost of goods, labor or materials. The restriction on price increases applies to a wide range of goods and services, including food, emergency supplies, medical supplies, housing, and repair and reconstruction services.

The law, Chin said, does not prohibit hoarding of toilet paper, medicine, food or anything else.

“Overall, it is fair to say that these laws are controversial and hard to enforce, but they appear to be constitutional. They are controversial because there is a general principle in this country that you are allowed to speculate,” and sell products for a higher price, he said.

“On the other hand, not everything is a matter of money.”