Beyond Citations and Publications, Value Mentorship and DEI

In November 2020, a study in the journal Nature concluded that early-career female scientists were more impactful when collaborating with male mentors. “Impact” in the study was measured by the number of publications and citations held by the scientists. 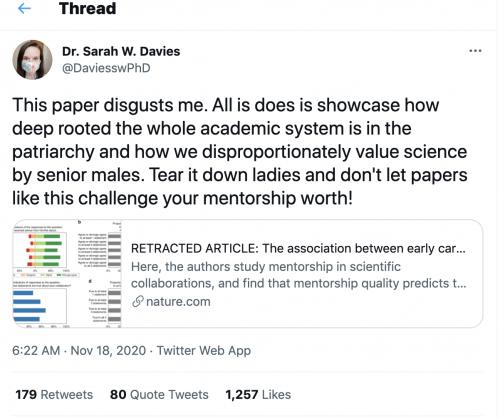 The criticism was swift and cutting. The study, by a female lead author, was eventually retracted.

But the notion that success in science is measured in citations and publications did not start or end with the Nature study. It has long been the currency of science. Yet several studies have shown that those metrics were built on and perpetuate systemic sexist and racist values. For example, white scientists are more likely to cite other white scientists. Male scientists tend to self-cite at higher rates than women. The process becomes exclusionary.

The conversations and outrage during the uproar over the study prompted a paper published recently in the journal PLOS Biology that calls for a shift in the scientific value system.

“Citations and impact metrics have been repeatedly shown to be sexist and racist, yet we still use them,” said co-leading author Sarah Davies, an assistant professor at Boston University. “It is high time we shift to a system that appreciates the varied avenues of impact in science. Valuing mentorship and advocating for diversity will be key components of this change.”

Alyssa Griffin is a postdoctoral fellow studying ocean chemistry and carbon storage in UC Davis Professor Tessa Hill’s Ocean Climate Lab at the UC Davis Bodega Marine Laboratory. They are both geochemists and co-authors on the PLOS Biology study.

Griffin offers no less than three analogies to describe her research with coral reefs, and she’s currently exploring avenues for blue carbon storage in seagrass. Her passion to conduct and explain science is clear and contagious. She is equally passionate about being an advocate for justice, equity, diversity and inclusion in STEM.

“It would be great to be able to just do my science,” Griffin says. “There are people who have that luxury and don’t have to think about the ways in which the scientific community actively excludes and harms people. But as a woman of color, I’m not afforded that privilege.”

The geosciences lag behind most STEM fields for gender, racial, and ethnic diversity.

“In terms of percentages, I’m one of very few women of color who hold a PhD in the earth sciences,” Griffin says. “Helping others pursue scientific education and careers is really important to me because I made it through a system designed to exclude people like me. When I say I’m an advocate, it means using my privilege to create opportunities, remove barriers and fling the door wide open for everyone and anyone who wants to do earth science.”

Rethinking science’s value systems is a key component of helping more people break through those barriers. Current definitions of “impact” and “success” clearly come into play during tenure review, funding opportunities or other awards for excellence. The women authoring the PLOS Biology paper call for the scientific community –and especially those in positions of power and privilege—to:

Beyond science, such guidance could be applied to many work environments that currently value productivity and output over mentorship, well-being, long-term job satisfaction and retainment.

So what does this have to do with climate change?

The paper’s climate connection may not be apparent at first to some, but it is very clear to Griffin, who has seen the effects of dissolving coral reefs first-hand. She says any behavior that perpetuates these types of structures are only going to hurt our ability to fight climate change.

She quotes National Science Foundation program director Brandon Jones when he said: “Our planet is facing all-hands-on-deck problems, but all hands are not on deck.”

“In the scientific community, we have a responsibility to value and amplify those voices,” Griffin says. “If we continue to perpetuate the narrow visions of what it means to be a scientist and be impactful throughout your career, it will exclude people we desperately need to be a part of this fight.”