As an environmental writer and media relations officer, I see a lot of coverage of our climate science in the news. Most of the time its accuracy is pretty spot-on or at least close. But once in a while — and far more often than I’d like — people use words like “apocalyptic” to describe a report’s findings.

That term is a reactionary word to describe the prospect of disaster, and one used when the writer is clearly startled. As a science communicator who is very concerned and yet optimistic about our climate change realities, I think terms like “apocalyptic” are ineffective and potentially damaging.

Let’s look at the word itself. The “Apocalypse” is commonly referenced in the Christian tradition, which I grew up in, I should note. If you ascribe to that tradition, it will not be an effective term to make you act on climate change because it indicates that what’s happening is a divine thing set in motion by God, and there’s nothing you can do about it. It’s the end of the world. So much for spurring climate action.

We also need to tell stories about solutions and to be careful about the language we use and its impact.

The real function of terms like “apocalyptic” relates to another overused word: "clickbait.” (Side note: Clickbait exists. But just because a headline is engaging doesn’t make it clickbait if it’s accurate.) You don’t get much more sensational than “apocalyptic.” It also gives media consumers the sense that they are observers — like this is a movie they’re watching rather than their very real lives on this planet.

So “apocalyptic” is not helpful in news or science communication, and it’s potentially damaging, serving only to panic and sensationalize.

All of this has to do with climate anxiety, which I wrote about recently for UC Davis’ Science & Climate coverage (“Confronting Climate Anxiety.”) Climate anxiety is a real and valid response to learning about and experiencing climate change. It is made worse by words like “apocalyptic.” It can also be made worse by well-intentioned messages and stories about climate change that aim to scare people to action. I’ve written some of those myself. But often, people don’t get scared to action — they get overwhelmed.

Recent surveys indicate that most Americans understand that climate change is happening and are concerned about it. Pew Research Center surveys also indicate that people don’t feel they can do much about it. 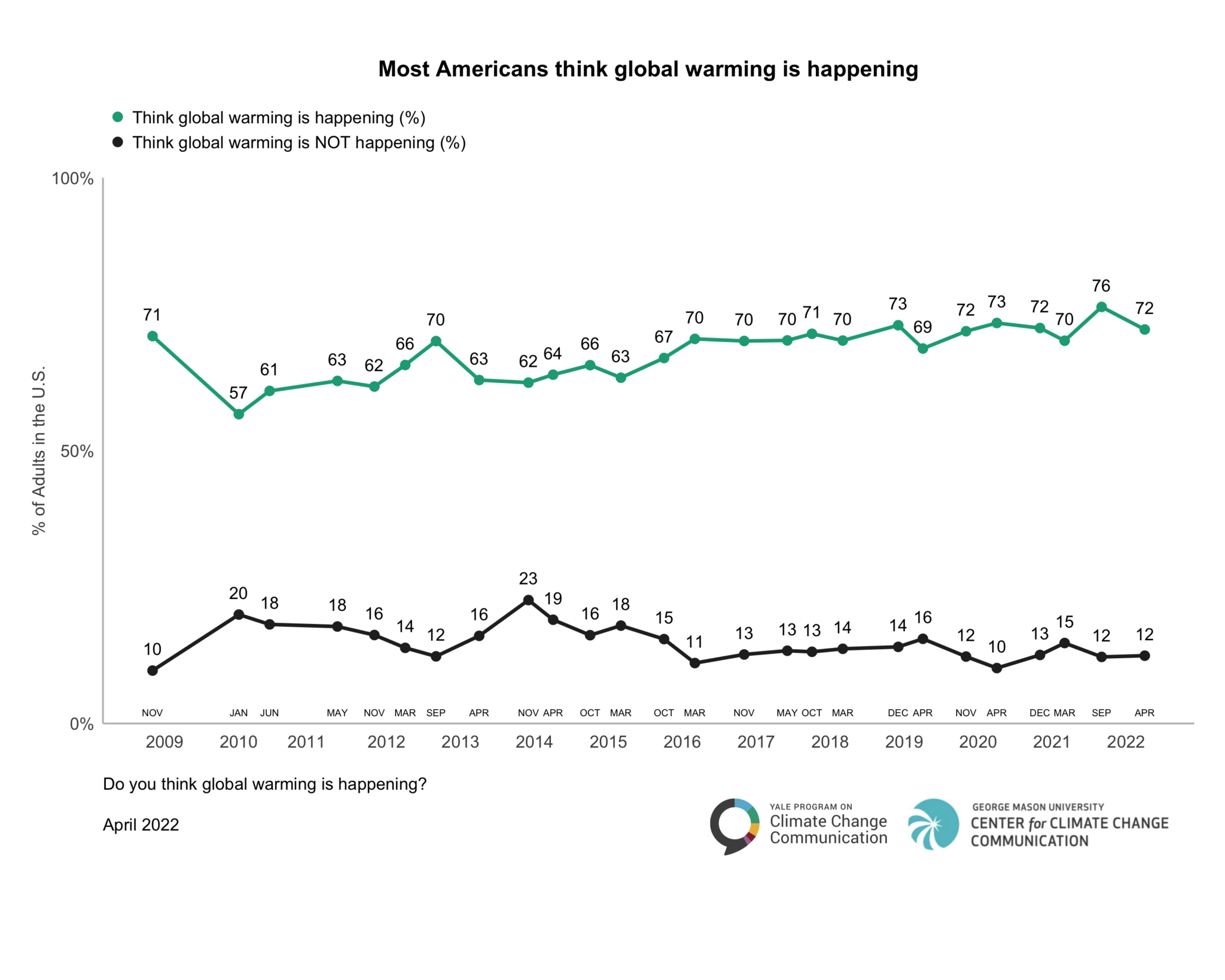 Meanwhile, global data  show that people trust scientists more than nearly any occupation on the planet. That may sound surprising, but that perception has been consistent in the U.S. since the 1970s and even rose following the pandemic.

What that means is people are concerned about climate change, they don’t know what to do about it, and are looking to people like scientists for guidance. That doesn’t mean we shouldn’t tell stories about climate change’s impacts and, yes, devastation. Islands are getting swallowed by the sea. Wildfire really does threaten huge chunks of my state, California. But we also need to tell stories about solutions—in the same story, if possible—and be careful about the language we use and its impact.

I was watching a commercial for a fitness app. It showed someone out of shape slowly becoming fit as they changed their habits. It allowed the viewer to imagine themselves as that person, getting healthier by making some changes. You rarely see fitness advertisements showing very unhealthy people and expecting the viewer to want to join them. People need to see what’s possible to build momentum for change.

Imagine going to your doctor with a sickness. It’s bad. But there’s still a chance for you to turn things around. How would you feel if your doctor just shook their head or, worse, got panicky, and said, “Oh, wow. This is awful! I’m talking, terrible! Do you realize you could die?” You ask them, “Well, geez, what should I do?” And they say, “I don’t really know, but you better do it fast, because this does not look good.”

Who would go back to a doctor like that? Some people need that kind of urgency. Many others need someone who can describe the problem in a straightforward, clear way, and then lay out the options for trying to tackle the problem.

I think that’s how we need to talk about the Earth — this massive body that sustains us. There are problems. We will not all blink out by 2050, but it will be hard, and we need to act. Many of those actions are actually fun and can enrich your life. Lots of people are doing this work, and you can join them.

Reaching the other side

One of my favorite environmental stories is from The Guardian about the Pacific newt. Thousands of newts are dying just trying to cross the road in northern California. (Don’t worry, that’s not my favorite part.) A UC Davis Road Ecology Center report found that newts crossing Alma Bridge Road, which is highlighted in the story, experience one of the highest roadkill rates for a wildlife species in the world. But there’s this little team of people out in the dark with flashlights, escorting Pacific newts across the street. I love those people.

From newts to birds to humans, many people are trying to help others reach a better future. We don’t always see them, and there may never be enough to address all the problems of the world, but to do nothing is an alternative that’s “doomed” from the start.