While closed for COVID-19, Cruess Hall has been the site of a large renovation project that included the construction of several new labs, shop spaces and classrooms supportive of the UC Davis Department of Design. Adjoining the existing Cruess Hall classrooms, labs and offices, the newly constructed spaces are scheduled to open in fall quarter 2021.

In the new Design Makerspace, undergraduate and graduate students will enjoy state-of-the-art labs for both design studio courses as well as faculty and student research. The new space will help students to create everything from biomaterials to smart products, jewelry, furniture and large-scale installations.

This renovation is shared with the Department of Cinema and Digital media who has additional multi-media labs and two cinemas. More information here.

In its first professional album (released by Centaur Records and distributed internationally by Naxos), several of the UC Davis Symphony Orchestra’s recent unedited live-concert recordings now appear alongside the Munich Radio Orchestra for anyone to enjoy on a streaming service or CD.

The album release is a capstone to a challenging and productive year for the UC Davis Symphony Orchestra. “In a way we have not been able to do easily before, we brought together current members of the orchestra and alumni to make two virtual orchestra presentations,” said Christian Baldini, director. There have been various projects happening throughout the summer, he said.

“In June we brought many of Edward Elgar's “Enigma” variations to life, notably including the moving "Nimrod” variation (watch below), which communicates an emotion of sadness and yet hopefulness I think we have all felt during this pandemic.”

The album opens with Baldini’s own composition, “Elapsing Twilight Shades,” performed by the Munich Radio Orchestra (at the Salzburg Festival), which introduces the listener to a symphonic soundscape that might be described as kaleidoscopic, contrasting and sometimes also humorous. The album ends with the stunning Amériques by the French-American maverick composer Edgar Varése, who drew inspiration from the urban jungle of New York City in the 1920s, complete with a fire department siren and 14 percussionists.

The album features two major works for violin and orchestra by György Ligeti and Witold Lutosławski. The Ligeti violin concerto is performed on the album by Miranda Cuckson, who is "one of the stars of the new music scene in New York" (Sequenza21),” Baldini said. Ligeti’s writing makes use of microtonality and scordatura (atypical tuning) of violin and viola, and instruments unusual for orchestra that include recorders and ocarinas.

Maximilian Haft, a native of Sacramento who has lived in Switzerland for almost two decades, performs Lutosławski's “Chain II.“ The soloist and the orchestra are at times not entirely in sync with one another (as per the composers' request). This is music that can and will sound differently every time it is performed, with fresh exchanges between rigorously notated music, and more deliberately free moments (chains), which alter the musical discourse.

The album is now available on your favorite music streaming/download service, as well as for CD purchase.

A collection of artwork along the stairwell featuring watercolor paintings by Davis artist Misuk Goltz is on display at the Pence Gallery through Aug. 31.

In 2009, Goltz fell passionately in love with watercolor painting, primarily focusing on portraits and figures. However, the isolation of sheltering due to COVID-19 only permitted her to safely spend time in open spaces or quiet, lonely places. Morning walks at sunrise and sunset shifted Goltz’s view to the landscapes she had previously ignored, inspiring her to paint them. This collection features watercolor paintings of figures, along with other objects and landscapes that are results of her artistic journey during 2020.

Drawing the Line at SFMOMA

Much like the policy and geography that define it, the line drawn between Mexico and the United States is malleable, literally shifting with time. Architecture firm Rael San Fratello has spent more than a decade questioning the idea of the border and focusing on the evolving contexts of urbanism in borderlands. Starting Saturday, you can see the work at SFMOMA.

Conceived, in part, as exercises in political subversion through design, Drawing the Line: Rael San Fratello at the U.S.-Mexico Border responds to the consequences of ostensibly permanent boundaries with impermanent histories for cultures and communities at the border. Taken as a whole, the projects shown here offer a conceptual dismantling of the border wall—usurping its meaning, reforming its identity, and stripping away its political power.

The exhibition is on view from Aug. 21-June 5, 2022. Find more information and purchase tickets here.

On the Boundary, a new exhibition at Datz Museum of Art in Gwangju, Korea, features the works of Young Suh, professor of art, and Katie Peterson, professor of English.
It is the Datz Museum’s second exhibition under the theme “Place and Space.” Using photographs, texts, videos and books, Suh and Peterson examine life on a road that is sometimes beautiful and sometimes precarious. On the Boundary reveals a story of existing on the boundaries of life, recreating a space that asks the fundamental question "Can we live here?"

The exhibition is on view on site as well as online through Oct. 17.

Aug. 28 – Jan. 9, 2022
The Fine Arts Museums of San Francisco celebrate pioneering feminist artist Judy Chicago with a retrospective spanning from her early engagement with the Californian Light and Space Movement in the 1960s to her current body of work, a searing investigation of mortality and environmental devastation begun in 2015. The exhibition includes approximately 130 paintings, prints, drawings and ceramic sculptures, in addition to ephemera, several films and a documentary. Together, these works of art chart the boundary-pushing path of the artist named Cohen by birth and Gerowitz by marriage, who after trying to fit into the patriarchal structure of the Los Angeles art world decided to change her name and the course of history.

Organized on the heels of the 40th anniversary of Chicago's landmark installation, The Dinner Party, in San Francisco and opening in conjunction with the 100th anniversary of women’s right to vote across the United States, Judy Chicago: A Retrospective pays homage to an artist whose lifelong fight against the suppression and erasure of women’s creativity has finally come full circle. Find more information here.

Social media of the week 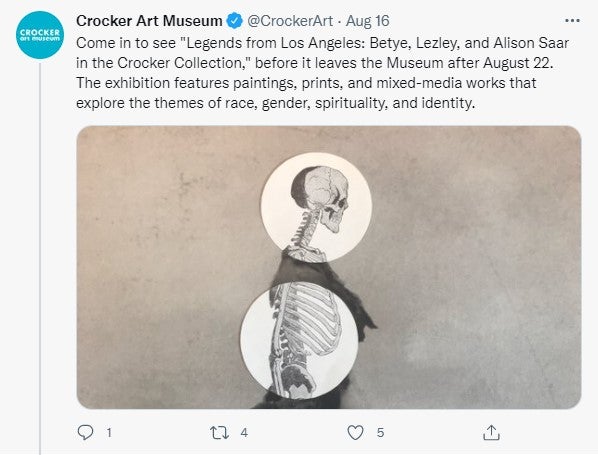