You may consider this Roy De Forest exhibit well worth the trip to San Francisco this weekend, or anytime through Aug. 28, when it's scheduled to conclude. Featuring an early painting, a rare construction from the 1960s, and works on paper, the exhibition at Brian Goss Fine Art, in San Francisco, highlights important early works by Roy De Forest, a renowned artist who is part of the first-generation art faculty of UC Davis who taught during the 1960s. His work has been exhibited at the Jan Shem and Maria Manetti Shrem Museum of Art, UC Davis, including at its grand opening exhibition of 1960s faculty in 2016.

De Forest (1930-2007) is known for brightly colored, folk-like landscapes with figures and animals.  The exhibition will be on view at Brian Gross Fine Art through Aug. 28.

Recognized as one of the most original painters of his generation, Roy De Forest's unique and beloved viewpoint can be seen in the selection of works in the exhibit. The Giant Dog’s Dilemma (1970) is a significant painting marking De Forest’s transition from his abstracted “aerial landscape” paintings of the 1960s to the celebrated pictorial landscapes of his mature work. In it we see a silhouetted figure inside of a log cabin looking out at a giant dog holding a fallen tree in its mouth, while the foreground is loosely divided up into semiabstracted areas containing depictions of a rabbit, shovel, and other Western imagery.

Another important work featured in the exhibition is The Young Napoleon (1962–63), an early construction. De Forest began creating constructions, or “boardisms” as he called them, after being inspired by the backs of paintings he saw while working at the San Francisco Museum of Art (now SFMOMA) in the 1950s. The constructions initially took the form of dense, abstract assemblages, but later evolved to include broad painted areas and carved animal figures, as seen in The Young Napoleon. Two later works on paper with elaborately decorated frames, Drawing (1984–85) and Untitled (sails) (1990), will be among the other works included in the exhibition.

Born in North Platte, Nebraska, in 1930, Roy De Forest studied at the California School of Fine Arts (now San Francisco Art Institute) and received his MA from San Francisco State University. He was a member of the illustrious art faculty at UC Davis from 1965 to 1992. His work has been exhibited widely throughout the United States and Europe, and was the subject of a mid-career survey, which originated at the San Francisco Museum of Modern Art in 1974 and traveled to the Fort Worth Art Museum, the Glenbow-Alberta Art Gallery, Calgary, Alberta, the Whitney Museum of American Art, New York, and the Utah Museum of Fine Arts, Salt Lake City. In 2017, the Oakland Museum of California mounted Of Dogs and Other People: The Art of Roy De Forest, the first full career retrospective of the late artist. Roy De Forest died in 2007.

Diego Rivera mural on view for free at SFMOMA

Ten years after his first stay, Mexican painter Diego Rivera (1886-1957) returned to San Francisco in June 1940 to headline the main fine arts exhibition of the Golden Gate International Exposition on Treasure Island. Working on a scaffold in an airplane hangar before a live audience, Rivera painted The Marriage of the Artistic Expression of the North and of the South on This Continent, commonly known as Pan American Unity, his last mural in the United States. The fresco depicts in colorful detail a past, present, and future that the artist believed were shared across North America, calling for cultural solidarity and exchange during a time of global conflict. Completed with support from local artists and assistants, with scenes of the Bay Area as a backdrop, the mural celebrates the creative spirit through portraits of artists, artisans, architects, and inventors who use art and technology as tools to shape society.

After the fair, Pan American Unity — measuring 22 by 74 feet and weighing more than 60,000 pounds — was moved to the campus of City College of San Francisco (CCSF). This was possible because Rivera painted this fresco not on a wall, but on ten steel-framed cement panels. More than half a century later, an international team of experts has spent years planning another move.

In partnership with CCSF, SFMOMA presents Rivera’s Pan American Unity in the museum’s free-to-the-public Roberts Family Gallery on Floor 1. On view until 2023, the mural will then return to CCSF to be installed in a new performing arts center.

Find more information, including a video, go here. Read the New York Times story about how the mural was moved here.

Covid and Beyond at Artery

The Artery Artists’ Cooperative in Davis is presenting Covid and Beyond featuring encaustic and mixed media paintings by Thelma Weatherford and oil paintings by Diane Carlson. These artists' works offer creative, exciting diversions from our daily lives.

Weatherford calls her vibrant, reflective abstractions “Mindscapes”. Drawing inspiration from the environment, she captures the inherent energy of trees, water, cityscapes and nature. She plays with color, texture, line, and form as she creates encaustic and mixed media paintings.

Many of Carlson’s paintings interpret current issues in a thoughtful, poignant manner. Her art is a laboratory of self-expression. “I try to create paintings that reflect the influence of my own inspirations and vision, bringing a colorful and off kilter perspective and excitement to the canvas,.” she said.

View the exhibition in person for free at the Artery, 11-5 p.m. Tuesday through Saturday or online here. The event runs July 2-Aug. 2.

Look for the Adam Forfang exhibition at the John Natsoulas Gallery,  through Sept. 1.

In-person tours at the Crocker

Enjoy an intimate guided tour of the art featured in Louis Comfort Tiffany: Treasures from the Driehaus Collection  along with other glass art in the Crocker’s collection. Tour schedule: 10 and 11 a.m., and 3 p.m. Thursdays, through July 29, and Fridays, Aug. 6-27. Register here.

For America and Beyond

Feast on works by American artists in For America: Paintings From the National Academy of Design and Legends From Los Angeles: Betye, Lezley and Alison Saar in the Crocker Collection. Tour schedule: 10 and 11 a.m., and 3 p.m. Fridays, through July 30, and Aug. 5 and 12. Register here.

Both of these in-person tours are free with museum admission and advance registration. Tours are limited to groups of no more than six people.

Born in Changchun, China, in 1948, Hung Liu grew up under the Maoist regime. Trained in the Socialist Realist style of painting, she elevates the subjects of archival photographs, re-creating them in the grand scale and lyrical style of history painting. Challenging primary sources, officially sanctioned documents, and revisionist accounts, Liu foregrounds displaced and wandering people frequently left out of traditional historical narratives and resurfaces stories lost to time. In her site-specific installation combining existing and new work in Wilsey Court, Liu highlights international and domestic narratives of migration.

Seongmin Yoo is one of the most important Korean artists to grapple with the concept of Eastern culture melding into Western culture. Her interest in human rights, women’s rights, and the evolving place of women in Korean society has been the focus of her recent work. In her current body of work that will be shown at the John Natsoulas Center for the Arts, Davis, she is dealing with the urge of being a cave woman in the modern world. The exhibition runs Aug. 4-29. The opening reception takes place on Aug. 7 from 7-9 p.m.

Look for the upcoming Sweet! exhibition at Gallery 625, in Woodland, running Aug. 6-Sept. 28, featuring work by Polly LaPorte and Robert Gonsowski. The opening reception will take place on Aug. 6 from 5:30-8 p.m. 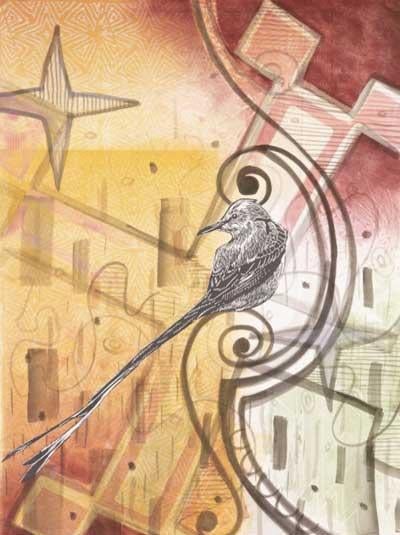 "Feathered Relations” explores sacred Indigenous beliefs around birds and their link to nature. Begaye's prints and paintings place a variety of birds in the foreground, depicting them naturally, but also existing on a higher plane. This exhibition is based on his show that was on display at the Gorman when the pandemic forced its closure.  Begaye (Diné) includes prints, wood blocks and multimedia works to create a conceptual homage to birds. For the artist, birds are about our relationships — to nature, to one another, to culture. Image: “Waiting for Spring,” 2018, monotype on paper, 30”x22”.

Larger Than Life: Murals in the Making

This exhibition recasts a unique chapter of Northern California’s unconventional art history in 24 works by 11 artists whose work was first championed by gallerist Adeliza McHugh. Developed in conjunction with an upcoming exhibition at the Crocker Art Museum in celebration of the Candy Store’s 60-year anniversary, “New Flavors: Collected at the Candy Store” expands the conventional narrative through centering the lesser-known stories of female artists and artists who identify as Cuban American, Japanese American, Mexican American and Native American. Gallery capacity is limited to keep visitors and staff safe. Reserved-time tickets required (free), available online.