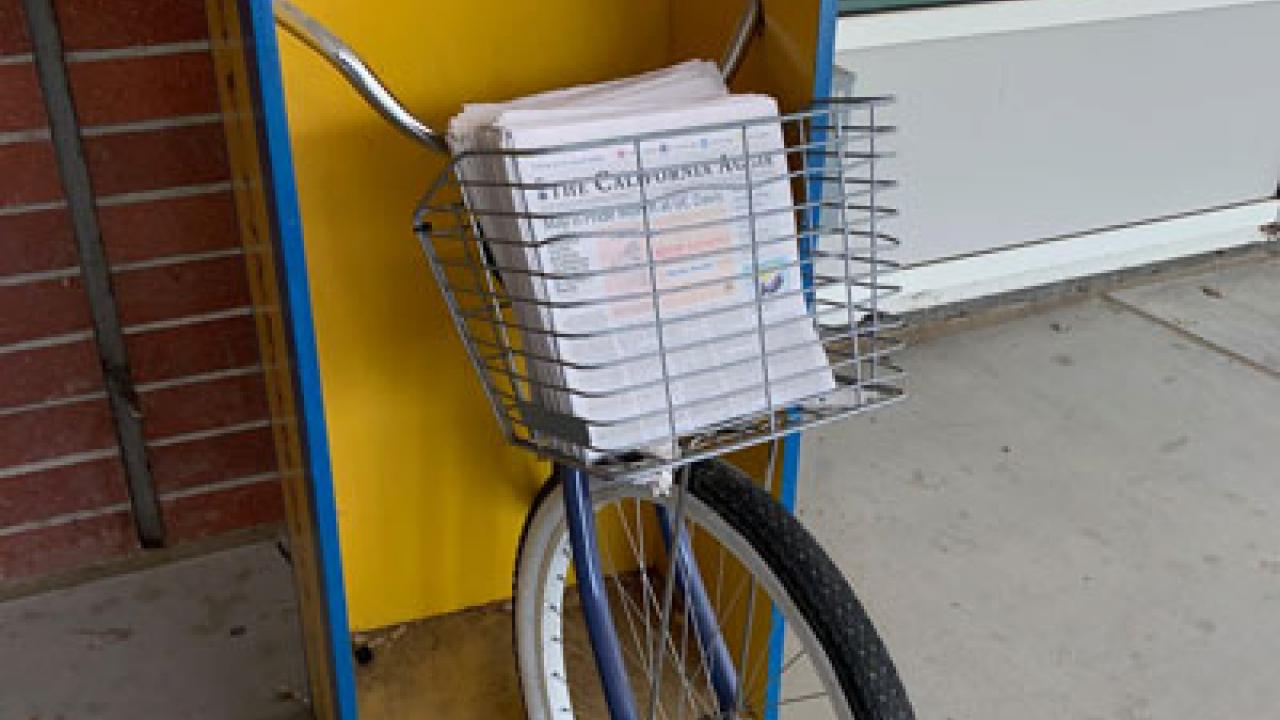 Getting out the News: Necessity is the Mother of Invention

By Karina Montoya, News Service Intern, with help from The California Aggie

When the Aggie went from a print paper to online only two years ago, the racks that held the papers all over campus went out of use too.

But with the return of a print newspaper came a new problem. Distribution racks.

Now, The California Aggie looks to bring eco-friendly art, representative of Davis’ character, to these many blue racks with the help of student designers, artists and even the local bus service.

The Aggie Racks Restoration project was born through the efforts of Laurie Pederson, a business manager for the Aggie beginning in 2017, as well as student managers and designers from three different teams: The California Aggie, Unitrans and The Bike Barn. Unitrans retrieved all the old rack and primed, sanded and painted them to be ready for their rejuvenation.

Thanks to a $2,000 Green Initiative Fund granted from ASUCD TGIF fund, student designers were able to use recycled parts of bicycles to decorate the racks in a way that reflected the campus.

The fund was to cover the creation of 15 news racks. The primary goal was to mirror the spirit of the campus all while demonstrating the sustainable use of recycled bike parts in a creative new way. Parts were donated by The Bike Barn and TAPs, the call for artists was sent and the Aggie office became the dedicated storage space for spare parts.

Not only does this opportunity allow designers to leave their own legacy on campus, but it also saves bike parts from being added to a mountain at the local dump by giving them new life.

The UC Davis campus is defined a lot by its eccentric art, with the Eggheads by Robert Arneson being the subject of senior pictures and first-visit-celebration photo shoots alike. The Aggie Racks ReCYCLE project offers students a chance to contribute to this spirit of the campus through their own artistic vision.

The Aggie is still looking for designers to put their own artistic touch to the 11 remaining racks. Students interested in designing their very own rack can contact Laurie Pederson at lmpederson@ucdavis.edu or by calling (530) 752-9877.