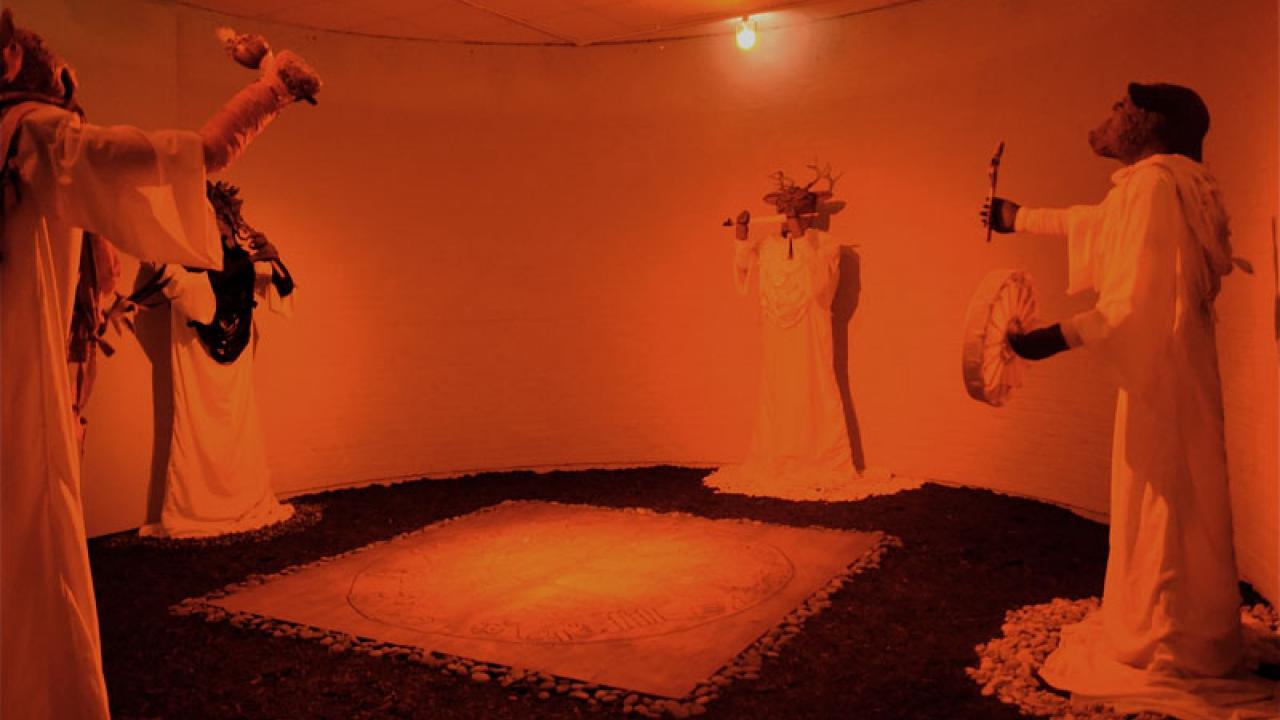 Latino Art at Forefront Throughout Region

Latino art and culture have come to the forefront in exhibitions and public art across the region from UC Davis, to Woodland and in Sacramento.

While the innovative art exhibitions, experimental workshops, public art and other happenings were not planned in any formal partnership, the coincidental timing works out well for the community. It provides artists a forum for exhibition in a diverse community, and it gives residents of the region convenient opportunities to see artwork that may be outside their purview or even comfort zone. Most of it is free.

Maceo Montoya, a UC Davis associate professor of Chicana/o studies, author and visual artist, said the migration of Chicanx/Latinx art from lesser-known galleries to mainstream venues is welcome. “These have been ongoing for years, just at much smaller, community-oriented venues, including TANA and places like Sol Collective and La Raza Galeria Posada in Sacramento,” said Montoya, who is also a faculty affiliate of Taller Arte del Nuevo Amenecer (TANA), a community-based art center in Woodland. TANA is operated in collaboration with UC Davis.

“The difference now is that more mainstream cultural spaces are taking notice, and as the demographics of our region, state and country continue to change, how can they not?” Montoya continued.

“Latinx artists have a thriving cultural presence, but their voices are rarely heard beyond their own communities. It's time that changed.” — Montoya

Following is a breakdown of the shows. The TANA exhibition in Woodland starts this week, and the Crocker Art Museum’s exhibition, due to close in March, has just been extended through Aug. 18. Many others last into spring and fall.

Latinx Art at a Glance

Arte Extraordinario, at the Crocker Art Museum in Sacramento, showcases the work of a diverse group of 25 artists, all of whom share a heritage associated with Spanish-speaking cultures in the Americas. The exhibition covers a range of genres from figuration to landscape to abstraction, as well as a variety of themes including politics, activism, humor, family and religion. Many of the featured artists have roots in California, and several are nationally or internationally recognized.

The bilingual (English/Spanish) exhibition showcases works by 25 artists from North, Central, and South America who are known for producing works that challenge, critique, innovate or inspire.

Visitors will see several works by members of Mexico’s famed Taller de Gráfica Popular a collective known for its prints addressing social, political, and economic issues. The Arte Extraordinario exhibit will be showcased at the Crocker Art Museum until March 24. General admission for the exhibit is $12 for adults and $8 for college students. More information, including ticket purchase information, can be found here.

The city of Sacramento and Consulate of Mexico are presenting a free outdoor temporary exhibition of nine bronze sculptures by Jorge Marín, a well-known Mexican contemporary artist. One of the pieces, titled “Wings of Mexico,” for example, consists of large wings framed where viewers can stand on a pedestal and pose for selfies and other photos between the wings. The artist describes the sculptures as interactive art pieces that symbolize cultural exchange and have been designed to evoke thoughts related to the spiritual virtues of humankind.

An ABC 10 video presentation of the sculptures follows here. (depicted below, right)

The Jan Shrem and Maria Manetti Shrem Museum of Art at UC Davis opened its 2019 season with Xicanx Futurity, which focuses on the work of artists Celia Herrera Rodríguez, Felicia “Fe” Montes, Gina Aparicio, Gilda Posada, Melanie Cervantes and Margaret “Quica” Alarcon. It is curated by UC Davis Chicana/o studies faculty Carlos Jackson and Susy Zepeda, as well as Maria Esther Fernandez, chief curator of the Triton Museum of Art in Santa Clara. The art's descriptions in the museum are written in Spanish and English.

The meaning behind the exhibition

The artists in this exhibition engage in an intergenerational dialogue that centers on indigenous forms of communal and hemispheric ceremony, rooted in sacred practices.

These practices emerged from or have been influenced by the Chicano/a Art Movement of the late 1960s. One aspect of this was to create a new identity for a community marginalized by taking “Chicano,” which was then a pejorative term, and giving it new meaning informed by a politic of self-determination and social justice. Queer Chicanx and Chicana feminists criticized the movement for its exclusionary and hetero-patriarchal practices.

The “x” at the beginning of Xicanx references Nahuatl, an indigenous language of Mesoamerica, and the “x” at the end represents a contemporary challenge to the gender binary. Xicanx Futurity represents the central ideas of the Chicana/o/x movements that are continuously in formation, and it illuminates the multiple paths toward justice, equality, and decolonization that are an everyday, lifelong and generational process.

Futurity, not to be confused with futurism, “describes the actions that are rooted in an understanding of the past while advancing new possibilities for the future,” according to a description of the exhibition.

The exhibition features works on paper, sculptures and a variety of other media. A popular event in early March, held in association with the exhibition, focused on healing and “everyday rituals and remedies.” More on programs and events here.

The Manetti Shrem is always free for all.

Earth, healing and sacred elements come into play with Cosmic Matriarchs, featuring the work of three artists, at TANA. Dalila Paola Mendez, Lilia “Liliflor” Ramirez, and Suzy Hernandez, through their respective works, honor the earth, sacred elements, life-givers, and generations of birthing, healing, and love that align with ancestral rememberings.

In images the viewer will find representations of the cycles of life and death, rebirth, regeneration, queer love, and an honoring of the earth as a life-giver of sacred resources, such as water, air, land, and fire, that are often “disrespected, commodified, and currently out of balance due to climate injustice,” according to the exhibition description. The spirit-centered visuals these artists offer return the viewer to a “humbleness and reverence for all that is sacred, especially life, breath, and our madre cosmica, as a pathway for healing and transformation.”