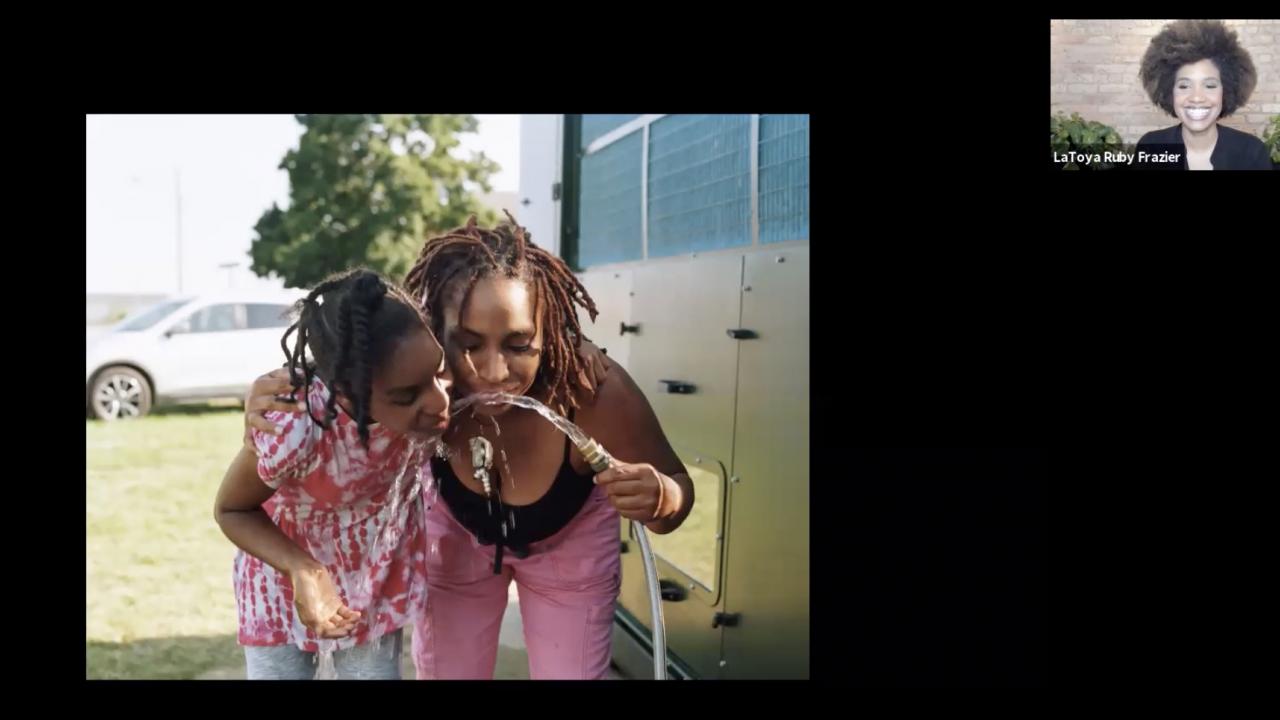 If an American photo league — like the one-time New York photography cooperative that arose in the first half of the 20th century — ever emerges anew, one can look to the art, ideas and mission of LaToya Ruby Frazier.

ABOUT THE PHOTO LEAGUE

The Photo League was a progressive cooperative of photographers in New York who banded together around a range of common social and creative causes. Founded in 1936, the league included some of the most lauded American photographers among its members, including Richard Avedon, Ansel Adams, and notably for its time, female photographers. It ceased operations in 1951.

In a remote event hosted recently by the Jan Shrem and Maria Manetti Shrem Museum of Art and other sponsors, Frazier — whose work features voices and perspectives traditionally erased from the American narrative — told her audience about the New York Photo League, who through their art, exposed the struggles of the American working class. She issued a call for action, too.

“I call right now, in this meeting, in this Zoom call, for a photo league,” she said, appearing to lock eyes with each of the more than 220 remote attendees. “We need a rise of a new age of a photo league.” She intimated that a 21st-century photo league would document the contemporary reality of daily life and help make the “invisible visible.”

Frazier was in conversation with Sampada Aranke, Manetti Shrem scholar-in-residence, Oct. 8. The event was one in a series of fall season programs on the museum’s schedule. This talk was co-sponsored by the Department of Art and Art History’s Art Studio Visiting Artist Lecture Series and Cultural Studies Graduate Group.

Work will be on view at UC Davis

Frazier, who has exhibited all over the United States and abroad, will be one of the many artists on view in the “Young, Gifted and Black” exhibition that will travel to the Manetti Shrem Museum in 2022. In her talk, she showed and talked about the systemic injustices she has captured on camera — images of families that would normally be excluded, including her mother and her. As she put it, her body of work offers “evidence that these individual’s stories deserve to be heard.”

On her shared computer screen, she flipped through a slideshow of her photography that told the stories, along with her narration, of unsung heroes. There was Frazier and her mother, who both suffered from illness; miners from Borinage, Belgium, residents of her hometown of Braddock, Pennsylvania; and families in Flint, Michigan, who infamously struggled for clean drinking water for years.

Author of ‘The Notion of Family’

She opened the presentation with a very personal work from her 2014 book, The Notion of Family, that took 13 years to complete. The portraits of her and her mother in this collection depict the artist battling Lupus (a systemic autoimmune disease) while her mother battled cancer, she said, as a result of environmental racism in their community. These photographs didn’t just serve as visual proof of the damage caused by the environmental racism they endured in Braddock, she said, but it also highlighted the bond the photography subjects formed and shared as they lived through the injustices.

Initially, by using herself as a subject in the photographs contained in The Notion of Family, she found her voice as an artist — it was then time to go wherever the work took her, she said.

Her approach in her series The Notion of Family led to more documentary work —  with communities asking for her to archive their own realities.

A commission from MAC’s Museum in Brussels led her to the city of Borinage where she documented the lives of coal-mining families who had been affected by industrialized labor. Other projects brought her back to her hometown in Pennsylvania. She recorded on camera the experiences of families who lost the only hospital in their community — with the new one being built the next town over.

Aranke asked Frazier if there was an image that the artist wanted us to rest on. Frazier smiled, responding by revealing onscreen a powerful photograph from her work from Flint, Michigan, where there has been an ongoing water crisis since 2014. The photo captured a moment shared by a mother and daughter drinking from a hose as the daughter, Frazier explained, took her very first sip of clean water from the tap.

Frazier advised artists in the audience: “After you have established your voice, and you and your history, and your narrative, you have to then mount that as a platform that is then the amplifier for all these other people’s voices that have been silenced and marginalized.”