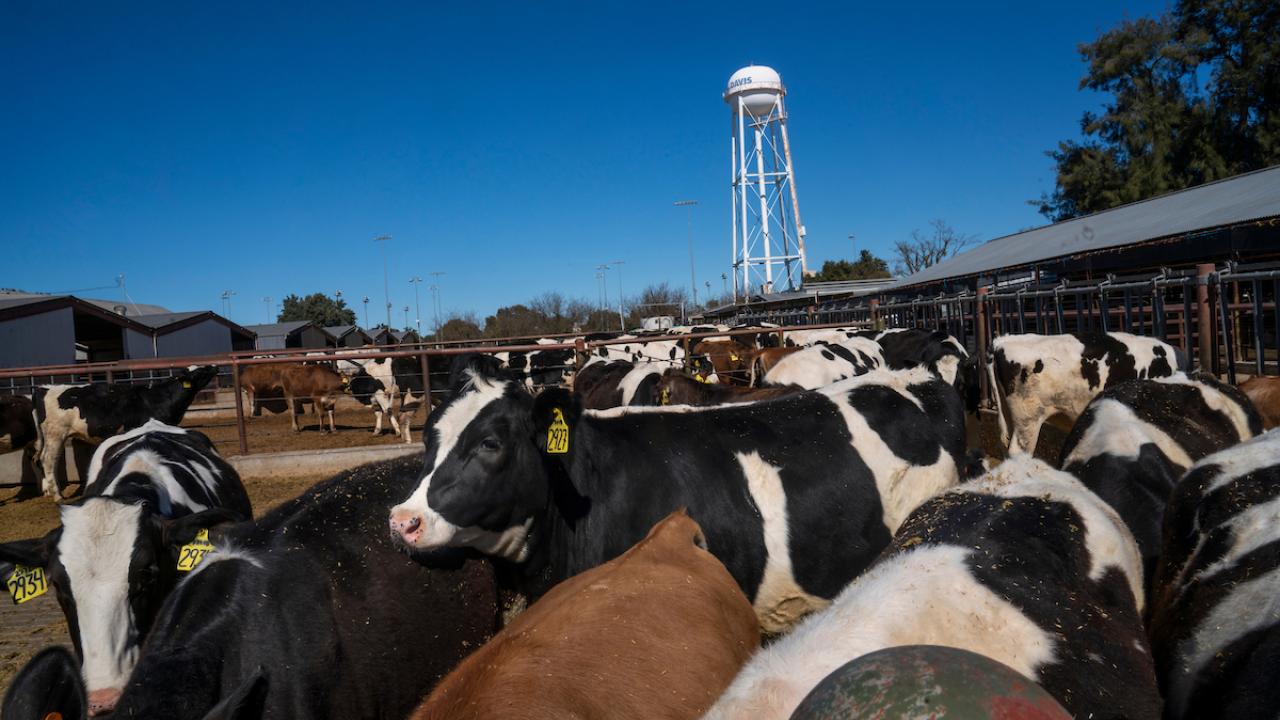 Producing a liter of milk in California emits less greenhouse gas and uses less land and water than it did in 1964, according to a recent study from researchers at the University of California, Davis.

“We compared 1964 through 2014 and found a 50 percent reduction in greenhouse gases to produce the same quantity and quality of milk,” said senior author Ermias Kebreab, professor and Sesnon Endowed Chair in the Department of Animal Science at UC Davis. “The magnitude of change is surprising.”

Scientists conducted a lifecycle environmental assessment of cows from the time they are born to the time they leave the farm gate. The study included such inputs as producing feed for the animals, and the machinery and transportation needed to produce milk.

Cows belch methane, a potent greenhouse gas, as part of their digestive process. The study found the biggest emission cuts came from reductions in these emissions, known as enteric methane, compared to reductions in emissions from manure.

“Reductions in enteric methane intensity (i.e., methane emissions per gallon of milk) are primarily a result of better genetics and breeding and better nutrition for the animals,” said Kebreab.

Water and land use

In addition, water use in the industry has dropped by 88 percent, due primarily to efficient water use in feed crops and the use of crop byproducts for feed such as almond hulls. Water use in housing and milking also dropped by 55 percent.

The amount of land it takes to produce a liter of milk compared to 1964 has also decreased. This is largely due to improvements in crop genetics and production practices that have increased yields of grain, hay and silage for cows on the same amount of land.

“We’ve saved an amount of land equal to the size of Connecticut,” said Kebreab.

Over the last 50 years, dairy production in California has undergone significant improvements and advancements in animal husbandry, feeding and housing practices, and in animal and plant genetics and crop production methods.

Total greenhouse gas emissions from cows overall has increased in California as more cows are needed to feed a growing population. But cows are now producing much more milk. In the 1960s, one cow could produce about 4,850 kilograms of milk per year. Now a cow can produce more than 10,000 kg annually.

Scientists continue to look for ways to reduce enteric methane emissions through better animal nutrition, including feed additives. In a previous study, Kebreab found that feeding dairy cows a small amount of a seaweed called Asparagopsis armata along with their feed, reduced methane emissions by up to 60 percent.

California is the top dairy producing state, and milk production is the third largest agricultural industry in the United States.

The study was published in the Journal of Dairy Science. Other authors include Anna Naranjo, Alexa Johnson and Heidi Rossow of UC Davis. Research was supported by California Dairy Research Foundation.