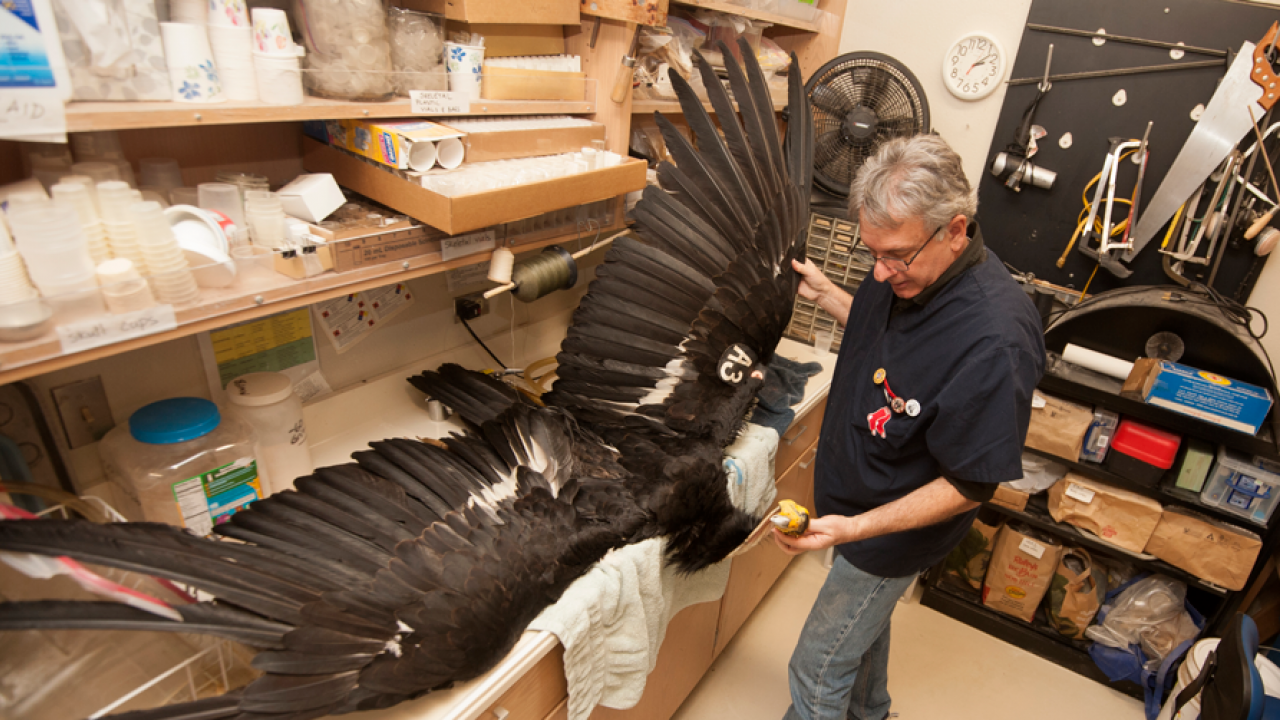 Not many undergraduates get to handle a prehistoric bird, but UC Davis student Lynette Williams is up to her elbows in a California condor.

UC Davis will hold its seventh annual Biodiversity Museum Day, 9 a.m. to 4 p.m. Saturday, Feb. 17, welcoming the public to see the university’s new condor specimens and much, much more of what the university collects and studies from the natural world. Parking and admission are free to this family friendly event.

Visitors will have access to 13 museums and collections and their range of displays including dinosaur bones and nematodes, honeybees and hawks, yeast cultures and carnivorous plants.

True, the bird is dead — killed tragically by ingesting lead from carcasses contaminated by ammunition. But with preservation, this California condor specimen will live on as a valuable research resource, an instructional aid and a piece of natural history at the UC Davis Museum of Wildlife and Fish Biology.

Williams is a museum intern — one of several students helping with the preparation of six condor specimens recently received from the California Condor Recovery Program of the U.S. Fish and Wildlife Service. UC Davis is one of the few places in the United States to be designated a repository for condor specimens. Live condors are a critically endangered species, and the government demands that available remains be properly handled and preserved for research and educational purposes.

“We’re fortunate because very few collections have condors,” said Andy Engilis, wildlife museum curator, who initiated efforts to acquire specimens of this rare bird for UC Davis back in 2011.

California condors are among the largest birds in North America. Weighing about 25 pounds and having a wingspan of up to 10 feet, these scavengers have been around since the Pleistocene Era.

“The day the condor specimens arrived here was thrilling,” said Williams, a junior majoring in wildlife, fish and conservation biology with plans for graduate school and a career as an ornithologist. “When we spread their wings out, we really understood we were handling a Pleistocene relic, something that was flying around when wooly mammoths and saber-toothed cats were still on Earth.”

California condors nearly went extinct in the 1980s, when their number dwindled to 23. The Fish and Wildlife Service placed all remaining wild condors into a captive breeding program, and, after a few years, began to release their offspring with the hope of creating self-sustaining wild populations. Today, nearly 500 descendants of the original 23 condors are alive — still a tenuous number.

All of the UC Davis condor specimens were bred in captivity and released at the age of 1 year to native habitats in California, Utah and Arizona. The Fish and Wildlife Service fits all condors with transmitters upon release, so the birds can be monitored — and when any of the birds stops moving, biologists retrieve it.

Dead birds undergo necropsies, which, in the case of the UC Davis-bound specimens, revealed that five of the birds had died of lead poisoning, the No. 1 cause of death of California condors, and the other from electrocution by power lines. The specimens — four adults and two juveniles — underwent further examination at UC Santa Cruz, by a lab that researches lead toxicity, before being delivered to UC Davis in late December.

Staff and undergraduate students went to work in January, assessing, measuring and skinning the birds, which is the first step toward preserving the specimens.

With two or three people to a bird, the team carefully removed anything from inside the condors that could rot — organs, tendons, fat. Tissue samples were cataloged and cryogenically frozen for future use in research.

“It was really stinky because they’re vultures, and they eat dead things, so they smell like they eat dead things,” said intern Rachel Alsheikh, a senior who is majoring in wildlife, fish and conservation biology. “Handling condors was a once-in-a-career opportunity, and we haven’t even started our careers. It was really special to touch a bird that has come so close to extinction.”

Then came time to wash the bird birds — no small chore in laboratory sinks sized for songbirds and waterfowl.

A centerpiece of collection

The most intact condors will be stuffed and preserved as study skins for teaching and research. Others can be salvaged for the wings and partial skeletons — adding to the wildlife museum’s collection of nearly 60,000 specimens.

Follow the Museum of Wildlife and Fish Biology on social media, to track the progress of preparing and preserving the specimens:

Later this spring, the museum team plans to place one of the condor specimens on display in the main hallway of the Academic Surge building that houses the museum.

“These condors will become a centerpiece of our teaching and outreach mission,” Engilis said. “In wildlife labs, UC Davis undergraduates will soon be able to see condors up close and touch these magnificent birds. This will help reinforce ongoing efforts to restore populations in the wild and inspire future conservation biologists.”

Meanwhile, museum staff and undergraduate interns will spend many hours in coming months further preparing the condor specimens. “The experience we get at the museum is invaluable,” said Alsheikh, who would like to continue working in natural history museums after graduation. “I’m really looking forward to talking with potential employers and saying, ‘Yes, I’ve handled a California condor.’”

Learn more about majoring in wildlife, fish and conservation biology.

Robin DeRieux is a senior writer for the College of Agricultural and Environmental Sciences.