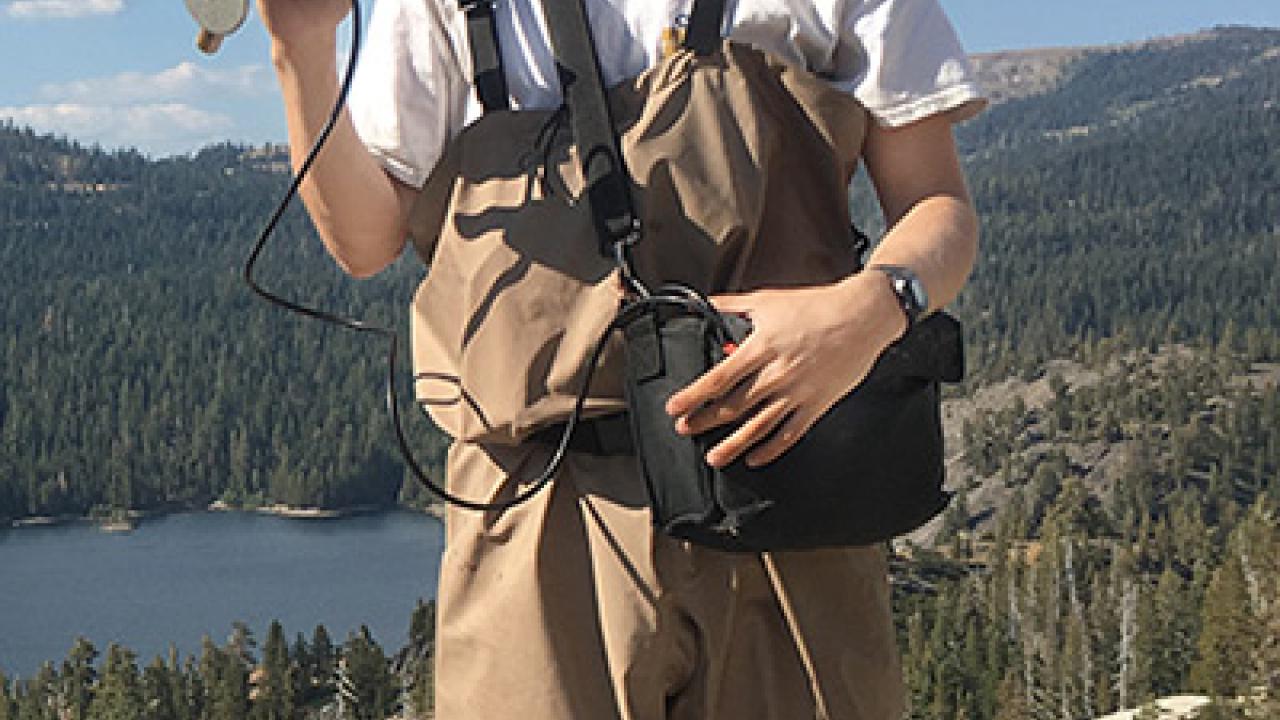 Where the Wild Things Are

How do you feel about wild things? Slippery creatures? Furry ones? Feathered friends? If you do feel passionate about animals, maybe you want to become a wildlife biologist — or possibly a veterinarian, fisheries manager, habitat restoration ecologist or zookeeper.

If these careers interest you, consider the wildlife, fish and conservation biology major at UC Davis. We prepare students who are dedicated to the conservation of all wildlife and fish species and interested in the resolution of conflicts between people and wildlife.

Students in this major are part of a close-knit community, says Thalia Badger, a senior who works as a peer advisor:

This is a special major because it’s relatively small, and the professors are very involved. Also there are lots of field-trip opportunities that get you outdoors and give you a chance to get to know your classmates well.

'Will I get to handle wildlife?'

If you choose this major, you can take advantage of various opportunities to get hands-on experience with wildlife. You can volunteer at the California Raptor Center, located just off campus and supported by the UC Davis School of Veterinary Medicine. The center rehabilitates sick, injured and orphaned birds of prey, with the goal of eventual re-release into the wild.

Or maybe you’ll be one of many students who have a wood duck internship with Professor John Eadie — checking nest boxes, counting eggs, and weighing and measuring hatchlings.

Eadie, an expert in waterfowl, estimates that more than 500 students have gained hands-on wildlife training since he initiated the wood duck intern program in the mid-1990s. “The birds are resilient, so students won’t hurt them,” says Eadie, “and the birds aren’t dangerous, so students aren’t going to get bitten.”

“Doing fieldwork, I really enjoy being able to get away from all the communications technology that sometimes seems to control our lives,” he says. “Fieldwork can be challenging, but the time spent out in nature is incredibly rejuvenating.”

Many wildlife students find internships off campus to extend their field training. Senior Melissa Marshall spent last summer on the Channel Islands, working with native foxes and skunks. As a volunteer for the National Park Service, she trapped animals and took blood samples and measurements.

From Marshall’s perspective, the conservation biology major “is a great path for people who want to work with animals but don’t necessarily want to become a vet.”

What kind of coursework is required?

As a wildlife, fish and conservation biology major, you’ll take a couple of years of foundational coursework in biology, chemistry, calculus, physics and statistics. Within the major, you’ll select from among four areas of specialization:

Where do conservation biology graduates work?

Employers who hire our graduates include government agencies such as the California Department of Fish and Wildlife and the Environmental Protection Agency, non-governmental organizations like The Nature Conservancy and Ducks Unlimited, as well as various environmental consulting firms.

Environmental manager for the Corp of Engineers

After graduation, Sarah Ross Arrouzet ’02 worked for the Sacramento Area Flood Control Agency as a wildlife biologist for nearly five years. She returned to school for a master’s degree in conservation biology, studying abroad in Australia and New Zealand.

Afterward, Arrouzet returned to the Sacramento area working as an environmental manager for the U.S. Army Corps of Engineers, one of the key agencies involved in flood risk management in the Central Valley and Sacramento River watershed.

When the Army Corps of Engineers plans a levee repair or a new floodwall, Arrouzet’s job is to analyze the proposed project’s impact on air quality, water quality, traffic and noise, and loss of habitat for species. Before and during construction, she’ll spend time in the field conducting wildlife and endangered species surveys, fish sampling or monitoring water quality. But most of her time is spent in the office, analyzing the impact of proposed projects on the environment and writing reports.

“I wouldn’t be where I am without the classes I took at UC Davis, especially the field classes — identifying birds and mammals and vegetation — learning my species,” she says.

The first time I had to do a bird count by myself, I knew what the species were. They didn’t just look like a bunch of what we call LBB’s [Little Brown Birds]. — Sarah Ross Arrouzet

“I also really drew on the knowledge from my upper-division classes, even statistics, which I initially didn’t want to take,” she adds. “But it has been useful.”

After graduation, Carmen DeLeon ’08 interned at the Golden Gate Raptor Observatory in the Marin Headlands. She eventually returned to graduate school for a master’s degree in natural resources and a certificate in environmental education. Now she works as an environmental educator and volunteer coordinator at the Lindsay Wildlife Experience in Walnut Creek, where it houses both animal exhibits and a wildlife rehabilitation hospital.

“I like working somewhere I can use my creativity and passion for wildlife conservation to share information about the animals I care about,” says DeLeon. “Wildlife biology is a career that you’re in for the impact.”

Learn more about the experiences of wildlife, fish and conservation biology majors by following the UC Davis student chapter of The Wildlife Society on Facebook.

Robin DeRieux is a senior writer for the College of Agricultural and Environmental Sciences.