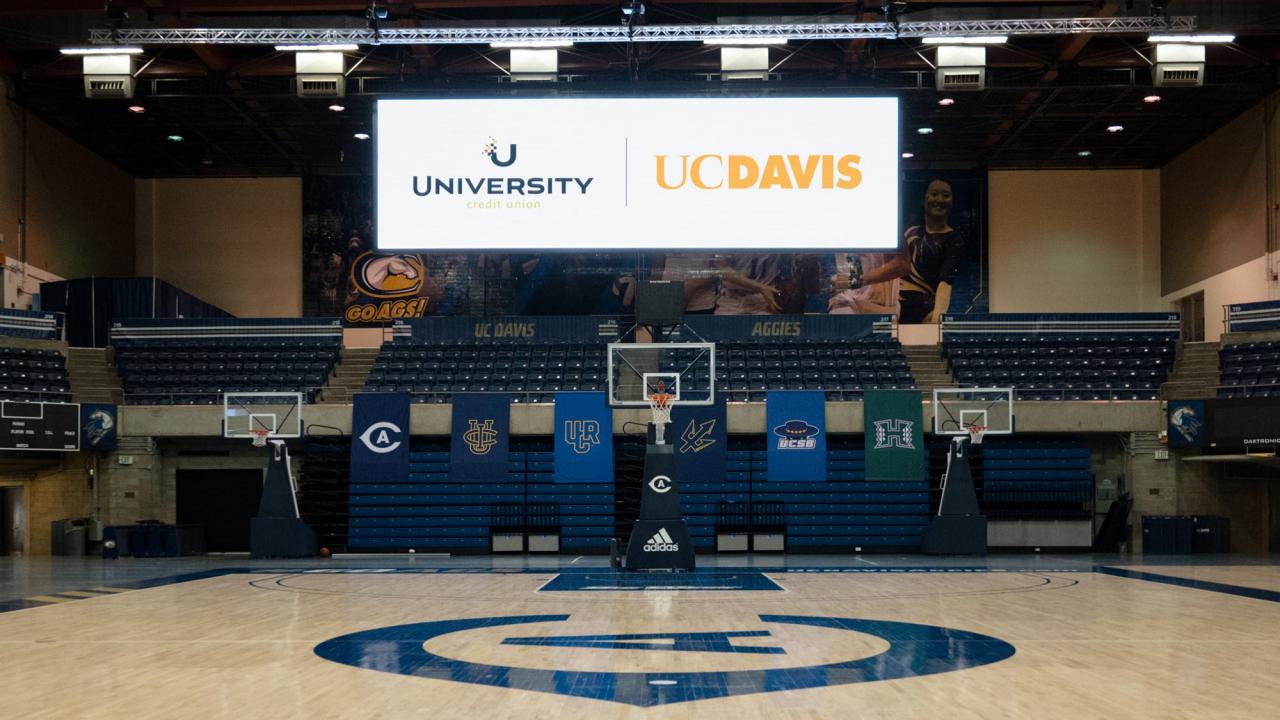 The University of California, Davis, has entered into a new, 10-year partnership with University Credit Union that will result in renaming and updating The Pavilion, funding student initiatives and increasing access to financial services on campus.

Originally prompted by the university’s need to fund deferred maintenance of The Pavilion, the agreement has grown into a broader campuswide partnership with financial services and educational priorities that fit squarely within Aggie community values.

“I’m pleased that we’ve found a financial institution partner who shares our mission of preparing students to meet the challenges of a diverse and changing world,” said Gary S. May, chancellor of UC Davis. “This partnership between UC Davis and University Credit Union will set an example for how such a relationship can grow beyond the naming of a building, with initiatives that will benefit our whole campus.”

In addition to improvements to The Pavilion, the partnership will bring University Credit Union ATMs to the Davis and Sacramento campuses and an advisory center to the Memorial Union for financial services. The California-based credit union provides access to membership benefits to all UC Davis students, employees, alumni and retirees, and will launch a co-branded UC Davis credit card and a UC Davis Athletics debit card in July.

The credit union will provide annual funding for undergraduate and graduate student initiatives, starting with Graduate Student Association travel awards to support student participation in national and international conferences. The Division of Student Affairs will collaborate annually with University Credit Union to identify areas of need for undergraduate funding, and additional opportunities will be identified as the partnership grows.

The partnership will also provide financial literacy and wellness education to employees, students and alumni through partnerships with the Aggie Compass Basic Needs Center, Aggie EVO System and UC Davis WorkLife. Student employment opportunities at the new advisory center will be coordinated with the Internship and Career Center, in alignment with the Aggie Launch initiative focused on career exploration.

Founded by UCLA employees more than 70 years ago, University Credit Union today serves more than 42,000 members and has partnerships with many California universities. The purpose-driven financial cooperative recently became a sponsor of the Big West Conference, which includes many of UC Davis’ intercollegiate teams as members.

“We are excited to serve the Aggie family, as UCU has expanded to serve universities throughout California,” said University Credit Union CEO and President David Tuyo. “The relationship will provide support to many facets of the UC Davis community and offer employees, alumni, students and retirees a financial edge for years to come. University Credit Union’s unbiased, conflict-free advice is a perfect match for UC Davis. Go Ags!”

Updating and renaming The Pavilion

Home to Aggie Division I teams including men’s and women’s basketball, volleyball and gymnastics, The Pavilion will be renamed University Credit Union Center as of July 1.

One of the first visible improvements already made to The Pavilion is a new Daktronics videoboard, more than 13 feet high and 46 feet wide, showing replays and real-time statistics. The videoboard can also be used for campus events throughout the academic year in one of the largest on-campus multiuse facilities in Northern California with seating capacity approaching 6,000 for basketball games.

The University Credit Union agreement will last until at least 2031, with the possibility of future extensions.

This agreement was made possible by the UC Davis Preferred Partnership Program in consultation with multiple campus stakeholders, via UC Davis Athletics’ multimedia rights holder, Learfield IMG College, and its Campus+ team.

University Credit Union, a federally insured financial cooperative, was founded in 1951 on UCLA’s campus by faculty and staff. Serving more than 42,000 members, UCU has become a leading credit union in the United States. UCU is guided by a board of directors, comprised only of faculty, staff and alumni of the university community. UCU’s core purpose to give members a financial edge in life, along with the credit union’s promise to advocate, educate and innovate, help position UCU as a financial partner to the university community.