Psychedelics as Possible Treatments for Depression and PTSD

A team of scientists at the University of California, Davis, is exploring how hallucinogenic drugs impact the structure and function of neurons — research that could lead to new treatments for depression, anxiety and related disorders. In a paper published on June 12 in the journal Cell Reports, they demonstrate that a wide range of psychedelic drugs, including well-known compounds such as LSD and MDMA, increase the number of neuronal branches (dendrites), the density of small protrusions on these branches (dendritic spines), and the number of connections between neurons (synapses). These structural changes could suggest that psychedelics are capable of repairing the circuits that are malfunctioning in mood and anxiety disorders.

“People have long assumed that psychedelics are capable of altering neuronal structure, but this is the first study that clearly and unambiguously supports that hypothesis. What is really exciting is that psychedelics seem to mirror the effects produced by ketamine,” said David Olson, assistant professor in the departments of Chemistry and of Biochemistry and Molecular Medicine, who leads the research team.

Ketamine, an anesthetic, has been receiving a lot of attention lately because it produces rapid antidepressant effects in treatment-resistant populations, leading the U.S. Food and Drug Administration to fast-track clinical trials of two antidepressant drugs based on ketamine. The antidepressant properties of ketamine may stem from its tendency to promote neural plasticity — the ability of neurons to rewire their connections.

“The rapid effects of ketamine on mood and plasticity are truly astounding. The big question we were trying to answer was whether or not other compounds are capable of doing what ketamine does,” Olson said.

Olson’s group has demonstrated that psychedelics mimic the effects of ketamine on neurons grown in a dish, and that these results extend to structural and electrical properties of neurons in animals. Rats treated with a single dose of DMT — a psychedelic compound found in the Amazonian herbal tea known as ayahuasca — showed an increase in the number of dendritic spines, similar to that seen with ketamine treatment. DMT itself is very short-lived in the rat: Most of the drug is eliminated within an hour. But the “rewiring” effects on the brain could be seen 24 hours later, demonstrating that these effects last for some time. 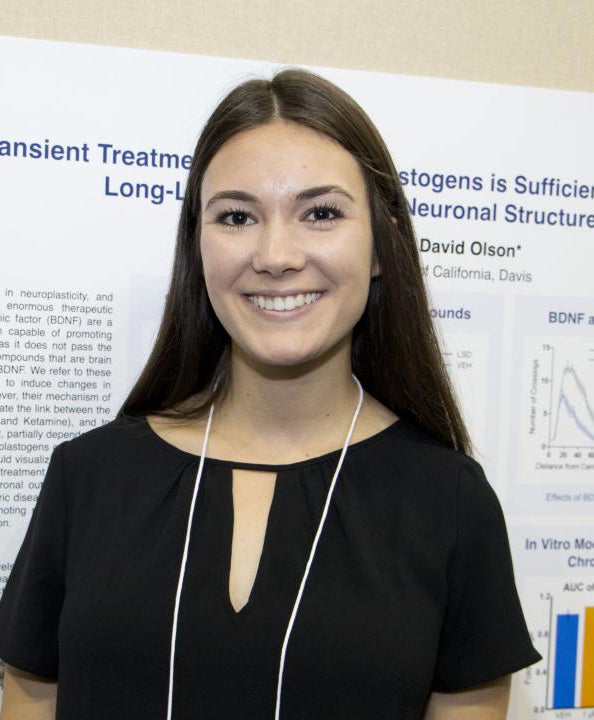 Behavioral studies also hint at the similarities between psychedelics and ketamine. In another recent paper published in ACS Chemical Neuroscience, Olson’s group showed that DMT treatment enabled rats to overcome a “fear response” to the memory of a mild electric shock. This test is considered to be a model of post-traumatic stress disorder, or PTSD, and interestingly, ketamine produces the same effect. Recent clinical trials have shown that like ketamine, DMT-containing ayahuasca might have fast-acting effects in people with recurrent depression, Olson said.

These discoveries potentially open doors for the development of novel drugs to treat mood and anxiety disorders, Olson said. His team has proposed the term “psychoplastogen” to describe this new class of “plasticity-promoting” compounds.

“Ketamine is no longer our only option. Our work demonstrates that there are a number of distinct chemical scaffolds capable of promoting plasticity like ketamine, providing additional opportunities for medicinal chemists to develop safer and more effective alternatives,” Olson said.

Olson and Cameron were co-authors on the ACS Chemical Neuroscience paper along with Charlie Benson and Lee Dunlap.

The work was partly supported by grants from the National Institutes of Health.