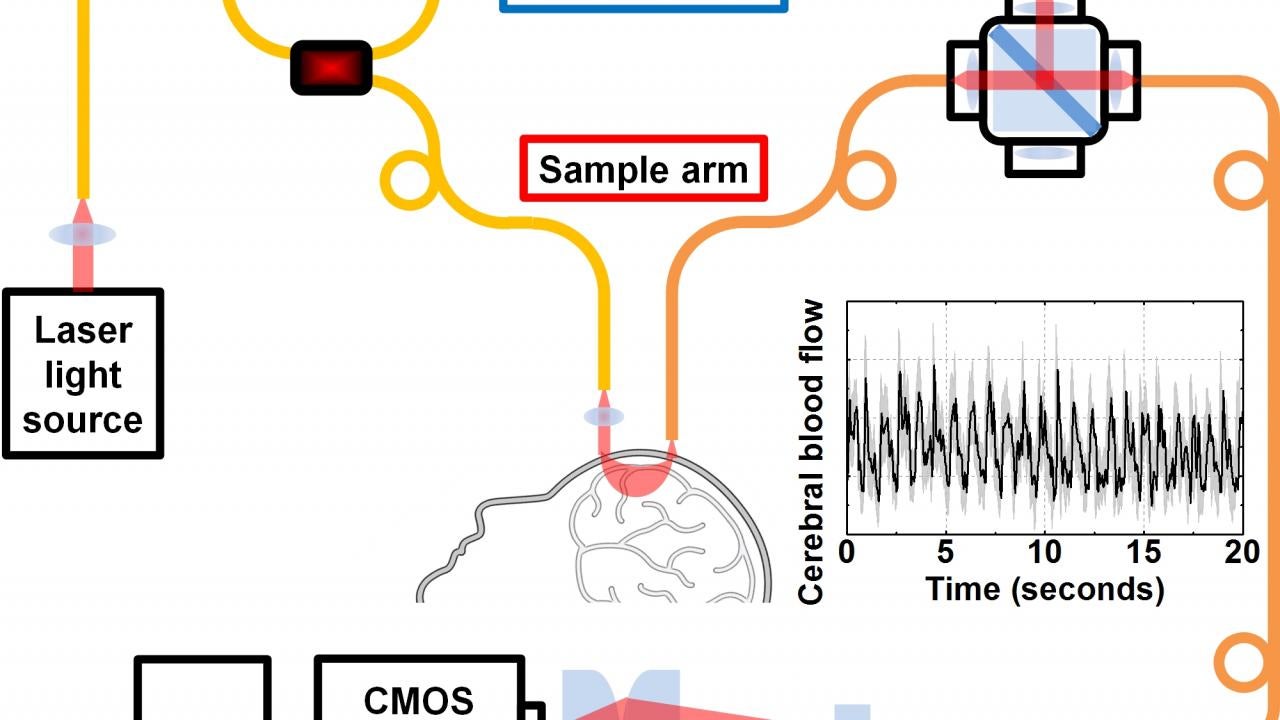 Biomedical engineers at the University of California, Davis, have developed a new technique for measuring blood flow in the human brain, which could be used in patients with stroke or traumatic brain injury, for example. The new technique, based on conventional digital camera technology, could be significantly cheaper and more robust than prior methods.

The work is described in a paper published April 26 in the journal Optica.

“Our setup is very promising, and the cost should be lower,” said Wenjun Zhou, a postdoctoral researcher working with Vivek Srinivasan, associate professor at the UC Davis Department of Biomedical Engineering.

If you shine a light into a cloudy solution, light particles, or photons, will be scattered in different directions. An experimental technique called diffuse correlation spectroscopy, or DCS, uses essentially this approach to look inside someone’s skull. Laser light is shined on the head; as photons from the laser pass through the skull and brain, they are scattered by blood and tissue. A detector placed elsewhere on the head, where the photons make their way out again, picks up the light fluctuations due to blood motion. These fluctuations provide information about blood flow.

The light signal is very weak, and the further it passes through the skull and brain tissue, the weaker it gets. So DCS requires a number of very sensitive, expensive single photon counting detectors. Boosting the light going in risks burning the patient’s skin.

Zhou and Srinivasan took a different approach, based on the fact that overlapping light waves will reinforce or cancel each other out, like overlapping ripples on a pond.

They first split the light beam into “sample” and “reference” paths. The sample beam goes into the patient’s head and another, stronger, reference beam is routed so that it reconnects with the sample beam before going to the detector. This boosts the signal, meaning that instead of needing about 20 photon-counting detectors that cost a few thousand dollars each, the researchers could use a single CMOS-based digital camera chip for a fraction of the price.

“The strong reference light enhances the weaker signal from the sample,” Zhou said.

They call the method interferometric diffusing wave spectroscopy, or iDWS. An added advantage is that they do not need to turn off the room lights while making measurements with iDWS, Zhou said. Eventually, they may even be able to monitor brain blood flow outdoors, under bright sunlight.

So far, the team has tested their device by making brain recordings from volunteers in the laboratory. They are working with Dr. Bruce Lyeth and Dr. Lara Zimmermann in the UC Davis Department of Neurological Surgery to validate and adapt the technology for eventual use in neurocritical care. UC Davis has applied for a provisional patent on the technology.

Other authors on the paper are graduate student Oybek Kholiqov and postdoctoral researcher Shau Poh Chong. Srinivasan also holds an appointment at the Department of Ophthalmology and Vision Science, UC Davis School of Medicine. The work was funded by grants from the National Institutes of Health.