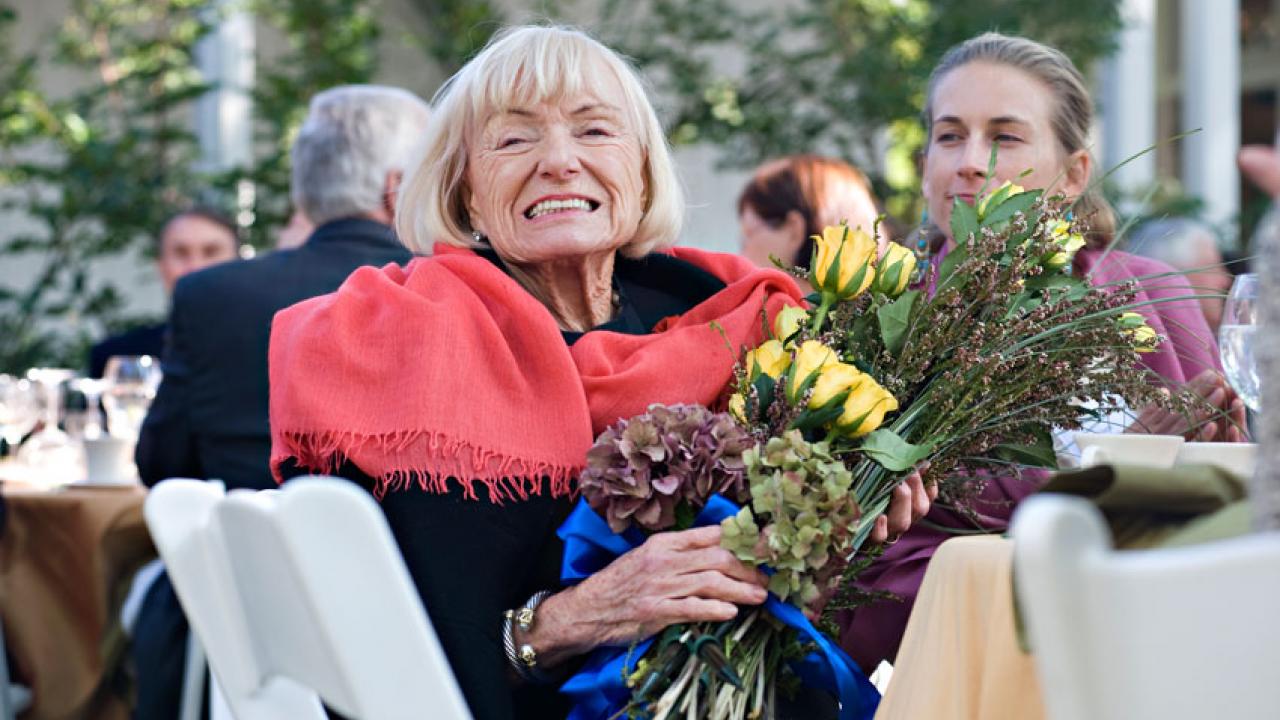 Honoring the Legacy of Margrit Mondavi

I am writing to acknowledge the sad news we learned today about the passing of one of the university’s most generous and visionary supporters, the extraordinary Margrit Mondavi.

Mrs. Mondavi was an incredible champion of our campus and our students. Her commitment to fostering the arts and furthering our research in food science helped UC Davis achieve yet greater heights and greater recognition in these areas.

Mrs. Mondavi and her late husband, Robert, were the driving force behind the Robert and Margrit Mondavi Center for the Performing Arts, which opened in 2002 and quickly attracted top musicians, dancers and writers from around the world. They offered their $35 million gift with a vision of integrating wine, food and the arts on our campus.

Mrs. Mondavi has meant so much to UC Davis. She made a $2 million gift toward the construction of the new Jan Shrem and Maria Manetti Shrem Museum of Art, which opens in November. She also sponsored the Margrit Mondavi Graduate Fellowships, which funds graduate students in the arts and humanities.

She traced her love of the arts to her mother and her bohemian hometown of Orselina, Switzerland. It was a passion that guided her life even when she moved to Napa Valley in the 1960s and became a winery tour guide. In 1967, she went to work at the Robert Mondavi Winery, where her efforts led to the renowned summer musical festival, culinary school and art collection. She and Robert Mondavi were married in 1980 and together dedicated themselves to philanthropy and spreading the story of California’s extraordinary winemaking around the world.

Last year, UC Davis fittingly dedicated the Margrit Mondavi Art Garden, a sculpture garden meant to inspire people to consider life’s beauty. As she told UC Davis Magazine in 2014, “There is so much beauty in the world, if we look for it.”

Together with her late husband, Mrs. Mondavi also helped establish the Robert Mondavi Institute for Wine and Food Science. The state-of-the-art institute soon became a gateway between UC Davis and a broad community of scientists, engineers, entrepreneurs, policymakers, industry professionals and technologists.

Throughout my tenure at UC Davis, Mrs. Mondavi offered kindness and warmth. She was a remarkable friend to this institution. We will miss her spirit and passion and will always remember with deep gratitude her many wonderful and lasting contributions to our campus and the UC Davis community.