Desert tortoises pace back and forth and can overheat by roadside fencing meant to help them, according to a study published in the journal Biological Conservation by the University of California, Davis, and the University of Georgia.

The Mojave Desert tortoise is a threatened species and icon of California’s southern deserts. The tortoise currently faces intense pressure as its habitat is eyed for solar and wind energy development. Loss of habitat comes at a time when biologists are working to reverse the declines this species has experienced since the 1970s. A key issue is roads.

“Roads are everywhere. Where tortoises and roads meet, it is inevitable that tortoises will lose,” said lead author Mark Peaden, a UC Davis ecology doctoral student.

Even in protected areas like the Mojave National Preserve, several tortoises are killed on roads each year. One technique land managers use to try to keep tortoises safe is to install fencing along roads.

However, the study found that tortoises that haven’t adjusted to the fencing pace along them, and sometimes overheat and die. Such short-term problems need to be addressed to reap the long-term benefits of fencing, the study said.

The researchers placed tiny GPS units on tortoises found near roads and along newly installed fencing. The units recorded the location and temperature of the animals every 15 minutes for two years. 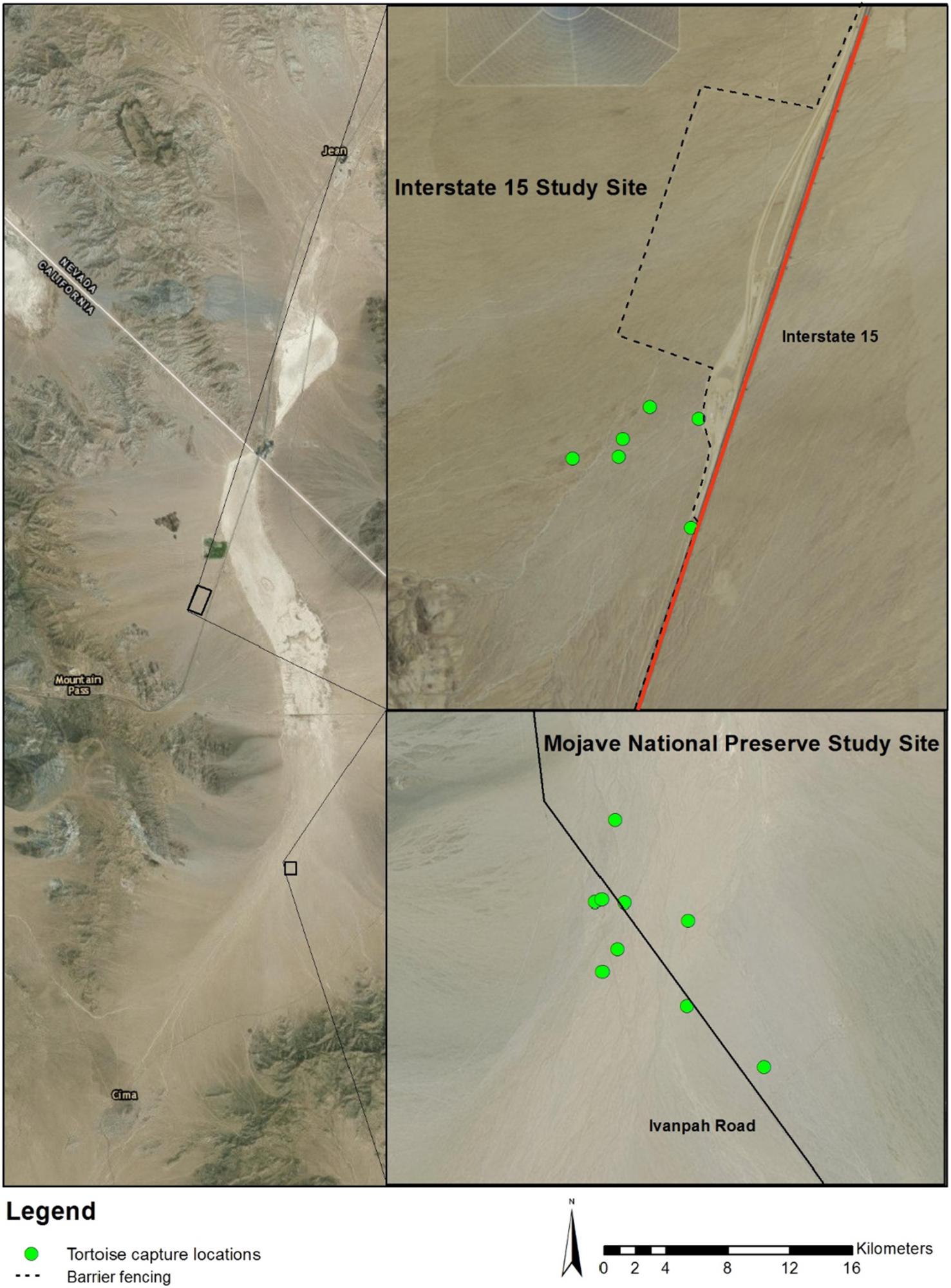 Although fencing kept tortoises off roads, some tortoises had difficulties adjusting to a new barrier. Tortoises got hotter at the road and the fence, reaching especially dangerous levels when animals paced along the fence. One tortoise succumbed to the heat and died while pacing the fence on a hot day.

“You can imagine how confused a tortoise must be after living in a place for 20 or 30 years and suddenly there is a barrier in its way,” said co-author Tracey Tuberville, associate research scientist at the University of Georgia’s Savannah River Ecology Lab. “Managers may have to account for this behavior by designing and installing barrier fencing that minimizes pacing or the risk that pacing animals will overheat.”

When tortoises aren’t barred from crossing roads, the study showed that they tended to cross where desert washes occurred. This helps managers target where to install barrier fencing or road underpasses to make fences most useful. For example, placing fences at washes could prevent tortoise deaths, as it would keep them off roads. Alternatively, a wildlife underpass could be constructed at a wash where tortoise movement rates are high.

The researchers also found that tortoises primarily crossed roads in midspring and again in midsummer. Increased traffic law enforcement during these windows may help reduce the number of tortoises struck and killed on roads, particularly in areas where visitor traffic increases during vacation seasons.

The research team hopes the results of their work can inform better use of barrier fencing to stop tortoise deaths from road traffic.

“We need more solution-based research like this to ensure that continued renewable energy growth in California is compatible with preserving native species for future generations,” said senior author Brian Todd, an associate professor at the UC Davis Department of Wildlife, Fish and Conservation Biology.

Other co-authors include Justin Nowakowski, a postdoctoral fellow at UC Davis, and Kurt Buhlmann, a senior research associate at the Savannah River Ecology Lab.

Funding for the study was provided by the Bureau of Land Management, California Energy Commission, National Park Service, and the USDA National Institute of Food and Agriculture.

Interested in a career studying wildlife and its habitat? This major prepares students who are dedicated to animal conservation and interested in the resolution of conflicts between people and wildlife. Students learn hands-on research skills and work closely with wildlife conservation organizations. Read more on our majors blog.