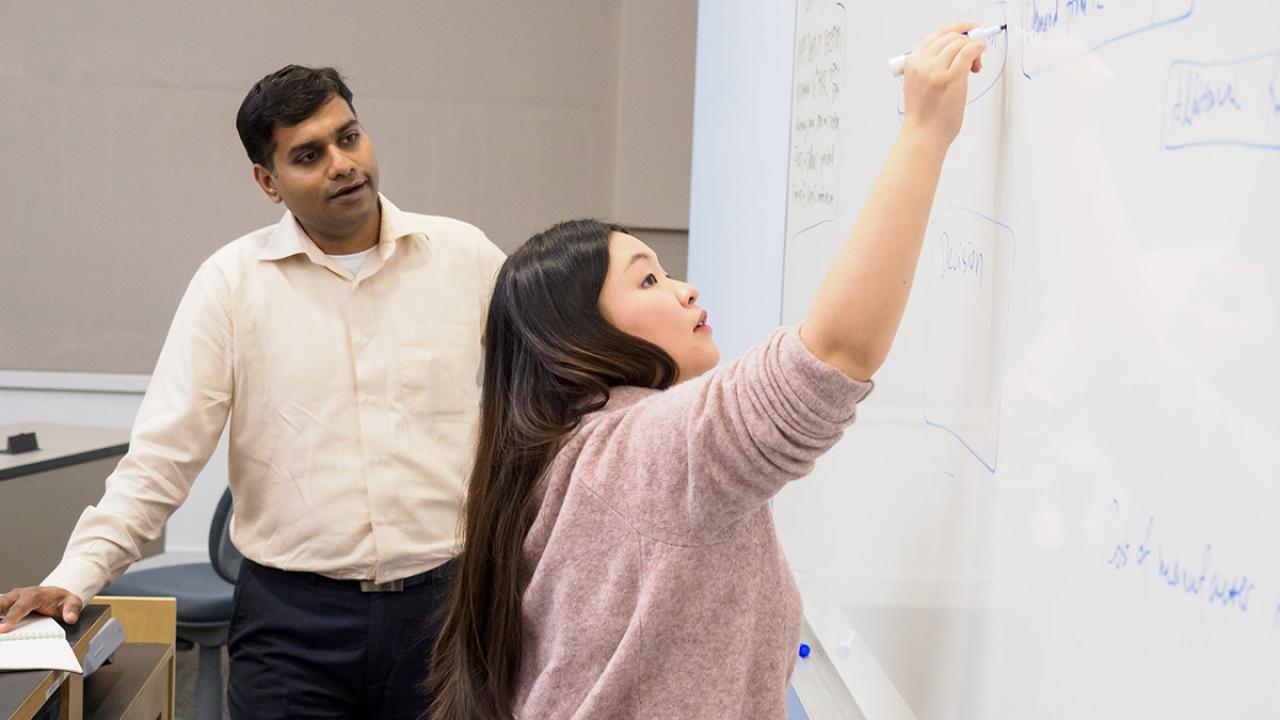 5 Aggies Who Returned for Business School

When Aggies graduate, they enter a brave new world, where a degree from UC Davis can lead to an entry-level position at a Silicon Valley tech company or a hands-on role at an early-stage startup.

As they move up the ladder and take on more responsibility, they often find they need more specialized management and leadership training to continue their career success. Many of these graduates return to campus to hone their skills at the UC Davis Graduate School of Management.

James Chen developed a taste for entrepreneurship when he founded Infinite Possibilities, a small Tokyo Sacramento startup promoting high-end Japanese automotive accessories. He applied his undergraduate degree in mechanical engineering and his passion for cars to make the company a reality.

When James later returned to UC Davis for the Full-Time MBA program, he landed a summer internship with Tesla. That led to a job offer, and today he’s a senior manager leading Tesla’s division for upgrades and accessories.

“I’m directly contributing to Tesla’s mission to revolutionize multiple industries toward a sustainable future, by providing creative approaches to solving problems,” says James. “My UC Davis MBA prepared me well for this challenge.”

At the Google campus in Mountain View, California, Ramak Siadatan introduces corporate clients to innovative technologies that allow their employees to work better together. His role at Google Cloud is about applying the right tools to improving collaboration and solving problems.

As a UC Davis undergraduate in agricultural and managerial economics [this major changed to “managerial economics”], Ramak landed his first job at Hewlett-Packard at a campus career fair. Within his first year at HP, he moved into a learning and development role in human resources. Over the past 15 years, he’s honed that craft as an instructor, course and curriculum developer, operations manager, and business consultant for several companies.

“After so many years in the same field, I still carry the same passion I have had since day one,” he says. “I also still have the same simple goal, which is to share what I am good at to help as many people as possible.”

Ramak returned to UC Davis for the Part-Time MBA program in Sacramento.

“It gave me access to brilliant faculty and brilliant classmates while I was still working full time,” he says. “I have had a distinct advantage ever since in being able to articulate the business value of our learning programs.”

Ramak continues giving back his time and support, most recently by serving as president of the Cal Aggie Alumni Association Board of Directors.

During her freshman year on the UC Davis basketball team, Lauren Beyer suffered a serious injury that forced her to take a break from athletics.

During her intensive physical rehabilitation, she continued to pursue her degree in communication and returned to basketball as a junior. After graduation, Lauren still had two years of athletic eligibility. She decided to continue playing Aggie basketball while pursuing her second love: math. She enrolled in the nine-month Master of Professional Accountancy program at the Graduate School of Management.

“They are so invested in your future and your career,” says Lauren of the professors and administrators in the program. “And it’s cool to hear my classmates’ success stories.”

A couple of months before she finished her graduate accounting degree, Deloitte LLP, one of the Big Four global professional services firms, drafted Lauren as its top pick for an assistant position on the audit and assurance team in Sacramento, where she continues to build her career.

With Wall Street experience and an undergraduate degree in economics, alumnus YiYi Han took the next step in advancing her career as a member of the 2017 charter class in the UC Davis Master of Science in Business Analytics  program in San Francisco. YiYi’s project team began working immediately with CBRE, a leading commercial real estate company, tapping into real-time data from emerging technologies. Their goal: to better understand how workers interact with their office environment to improve their use of space and ultimately their productivity.

“The location in San Francisco is great,” says YiYi of her 10-month business program. “It’s a tech hub and has a lot of financial services companies, which is where I can really make the best use of my degree.”

YiYi had already applied her Aggie education in several ways. As an undergraduate, she studied abroad at the London School of Economics and had an internship with Morgan Stanley in New York. Now she’s ready for new opportunities emerging in the digital economy, such as working in finance at a technology company.

“These are all useful skills for me for pursuing a career in the business analytics field, which is booming in the big data era,” she says.

As a senior manager in human resources at Salesforce, Cole Lipovac does “all things people-related,” he says, working side-by-side with some of the best leaders in the company. He recently joined the San Francisco-based database software giant after having worked his way up to human resources business partner at another globally recognized Bay Area tech firm, GoPro.

Cole attributes much of his career growth to following up his bachelor’s degree in psychology, focusing on behavior within organizations, with an MBA from the management school’s San Francisco Bay Area Part-Time MBA program, which allowed him to continue working while pursuing his degree. He says the part-time option helped him balance his course load with his rising full-time career. Another benefit: He could immediately put what he learned in class into practice.

“Once I started working,” Cole says, “going back and getting the MBA really helped me with the strategic planning.”

His advice to prospective business students: Set your mind on where you want your career to go and steer your skill set and talent toward that goal. He also recommends building solid connections with fellow students, because “life comes up and things happen where you need a support system to help you get through it.”

Brad Hooker is a writer for the UC Davis Graduate School of Management, where he helps showcase for the school’s many business research and education programs.