Chardonnay Pomace May Be Rich in Health-Enhancing Compounds 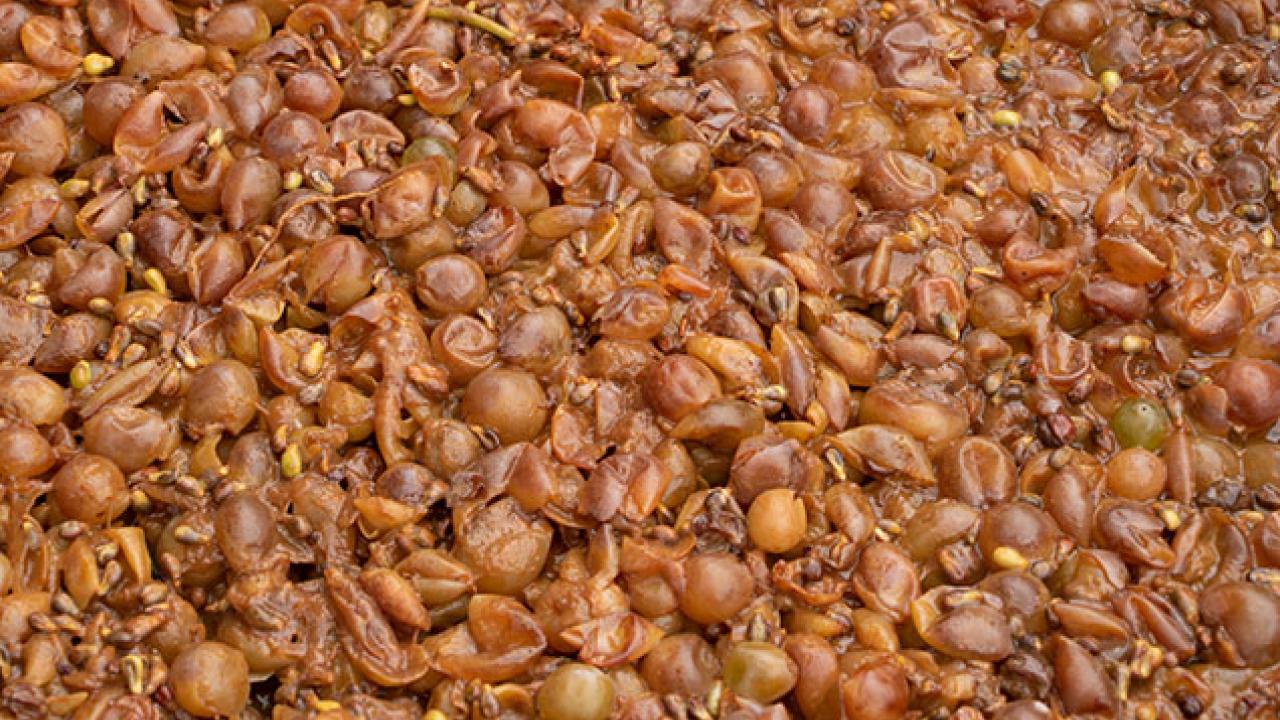 California produces nearly 4 million tons of world-class wine each year, but with that comes thousands of tons of residue like grape skins, seeds, stems and pulp. What if scientists could harness that viticultural waste to help promote human health?

Maybe they can, according to new research from food scientists at the University of California, Davis. In a study published in the journal LWT - Food Science and Technology, the team discovered a wealth of potentially health-enhancing compounds and sugar molecules called oligosaccharides within chardonnay wine-grape pomace.

“We were surprised by the diversity of the oligosaccharides in the chardonnay wine grapes, including the presence of structural elements found in mother’s milk,” said Amanda Sinrod, lead author and a master’s candidate working with Professor Daniela Barile.

The UC Davis team analyzed the molecular composition of chardonnay residue provided by Jackson Family Wines and Sonomaceuticals, a company founded by two food industry businesswomen to develop new uses for viticulture waste. Wine-grape pomace, or marc, comprises about 30 percent of the original wine-grape material, and much of it is left to decompose in the sun.

Potential source for food or supplements

“It’s all about sustainable wine production and finding a second life for wine grapes,” Barile explained. “Up to this point, chardonnay marc has been regarded as a byproduct of winemaking with little or no value. Early results are encouraging that marc could be a valuable source for oligosaccharides and other compounds that support health and nutrition.”

UC Davis researchers were among the first to decode the magic of oligosaccharides in mother’s milk. The sugar molecules don’t nourish the baby directly. Instead, they feed a strain of bacteria in the infant’s intestines that helps build immunity against illness and disease. That discovery is helping scientists develop methods and products to improve human health.

Barile’s lab innovates technologies for recovering health-enhancing compounds from various agricultural and industrial waste streams, such as whey, legumes and chickpeas. Her team previously discovered oligosaccharides in both red and white wine residue and is pleased with preliminary findings from the chardonnay analysis.

“There is more research to be done, but early results are promising that chardonnay marc can become a source for developing supplements and other food products to support health,” Barile said.

Oligosaccharides appeared to be especially abundant in the wine-grape skins. In earlier research, scientists detected oligosaccharides in the finished wine product, but not in large concentrations. Researchers didn’t include bottled wine in this study.

The chardonnay marc samples were also rich in flavonoids, healthy compounds found in many fruits and vegetables. Researchers are exploring whether the oligosaccharides work independently or synergistically with these bioactive compounds to support intestinal health. The team is studying how growing conditions, vintages and processing might affect the health potential of viticulture waste.

“We observed significant differences in the relative abundance and type of oligosaccharides in different parts of the marc, so further research is needed to maximize their potential in food product design,” Sinrod said.

The UC Davis team included Cooperative Extension Specialist Selina Wang and Xuequi Li with the Olive Center, and Mrittika Bhattacharya and Bruna Paviani with the Department of Food Science and Technology.