What Makes Each of Us Who We Are? 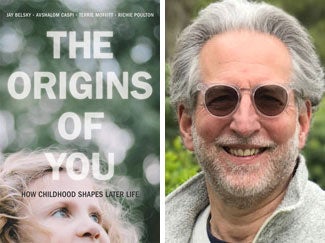 “‘The Origins of You’ poses a question that is both timely and timeless: How does each of us become the unique person we are? Drawing upon the most authoritative psychological studies ever conducted on the topic, the authors offer a treasure trove of remarkable insights that both underscore the complexity of human development and affirm the power of human resilience.” ― Dan P. McAdams, author of “The Art and Science of Personality Development”

Four researchers, including Professor Jay Belsky of the UC Davis Department of Human Ecology, share their insights from three long-term studies following large numbers of people from as young as birth to as old as middle age.

“The result is unprecedented insight into what makes each of us who we are,” the publisher declares in describing the book.

The description lists some of the researchers’ questions: “Does temperament in childhood predict adult personality? What role do parents play in shaping how a child matures? Is day care bad ― or good ― for children? Does adolescent delinquency forecast a life of crime? Do genes influence success in life? Is health in adulthood shaped by childhood experiences?”

Belsky did the writing. He drew on his work studying American children from birth to age 15 — addressing the effects of day care on child development, the experience of being parented as a child on how one parents as an adult, and the effect of adverse childhood experiences on girl’s physical maturation and sexual behavior — and his co-authors’ work in New Zealand and the United Kingdom.

Here is some of what The Origins of You reveals, according to Belsky:

Leigh Houck is a June 2020 graduate of UC Davis — Spanish literature major, writing minor — who works as in intern for the News and Media Relations Team in the Office of Strategic Communications.