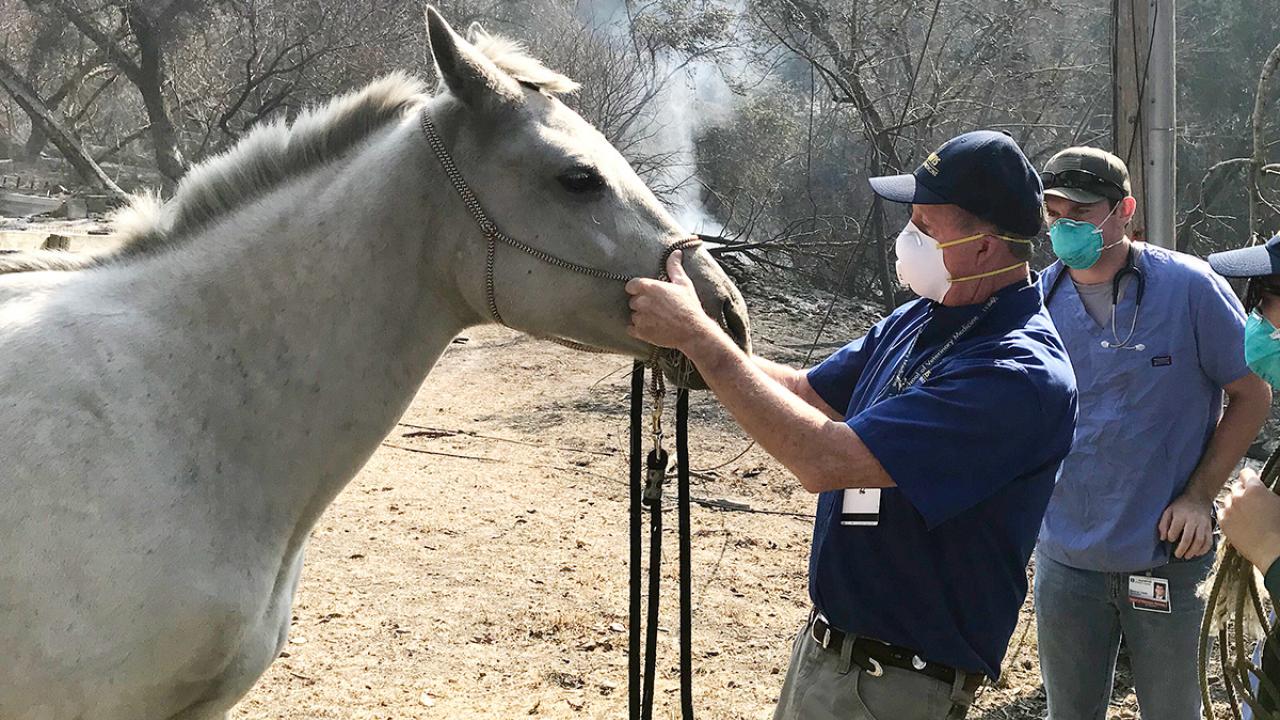 (Editor's note: UC Davis researchers launched a study In January 2018 about fire-formed pollutants in Sonoma ash from the 2017 fires.)

Burning and watery eyes, sandpaper-dry throat, tight chest and a wheezing cough: Even if you haven’t been in the midst of a wildfire, chances are you’ve been close enough to feel the effects that may last for several days, depending on the size of the fire. But what are the long-term impacts of wildfire smoke — not only for humans, but animals as well?

UC Davis Professor Kent Pinkerton has spent the past 30 years studying air pollution and how it affects respiratory, cardiovascular and neurologic health of humans and animals. He has conducted a number of studies in the San Joaquin Valley to better understand how airborne particles in agricultural areas contribute to lung diseases, such as asthma and chronic obstructive pulmonary disease.

We don’t have the complete data on the complexity of wildfire smoke composition that may contain chemicals that are quite toxic. — Kent Pinkerton

Pinkerton explains a greater concentration of particles in wildfire smoke vary in size, and different constituents in those particles may create a more toxic combination than researchers find in other sources of air pollution.

What can you do to help protect yourself and your animals from the potential health impacts of wildfire smoke exposure? Check out thesetipsfrom the American Veterinary Medical Association.

Lung structure in humans and pets

Because the lung structure in companion animals such as cats, dogs and horses is similar to those in people, they suffer many of the same physiological impacts of smoke exposure and inhalation.

As with humans, some animals are at greater risk, including those with cardiovascular or respiratory disease. Veterinarians advise that these pets should be watched closely during all periods of poor air quality.

Fortunately, some of those animals are more likely to breathe through their noses, which help to filter particles from the air better. But many of the animals impacted are outside on farms and ranches, being exposed as much or more  than humans near the fires.

With an increase in the number and intensity of these fires over the past couple of years, the need for better understanding the compounds found in wildfire smoke continues to be urgent for several reasons, Pinkerton says, especially as it connects to human and animal health.

He points to the increasing amount of chemicals in the air. For one, the amount of aerial fire retardant used in California increased from approximately 3 million gallons in 2012 to about 7 million in 2015. Those chemicals are necessary to suppress wildfire and keep it from reaching heavily populated urban areas. During the same period, pesticide use in the state increased from about 186 million pounds to 194 million pounds, adding to the problem.

“We see the strong emerging need for new research in this area to better determine the health risks of wildfire smoke to humans and animals,” Pinkerton says. “The past few years have shown the prevalence of wildfires isn’t going away any time soon.”

Trina Wood is the UC Davis School of Veterinary Medicine’s communications “Jill of All Trades,” a lover of animals who tells multimedia stories.