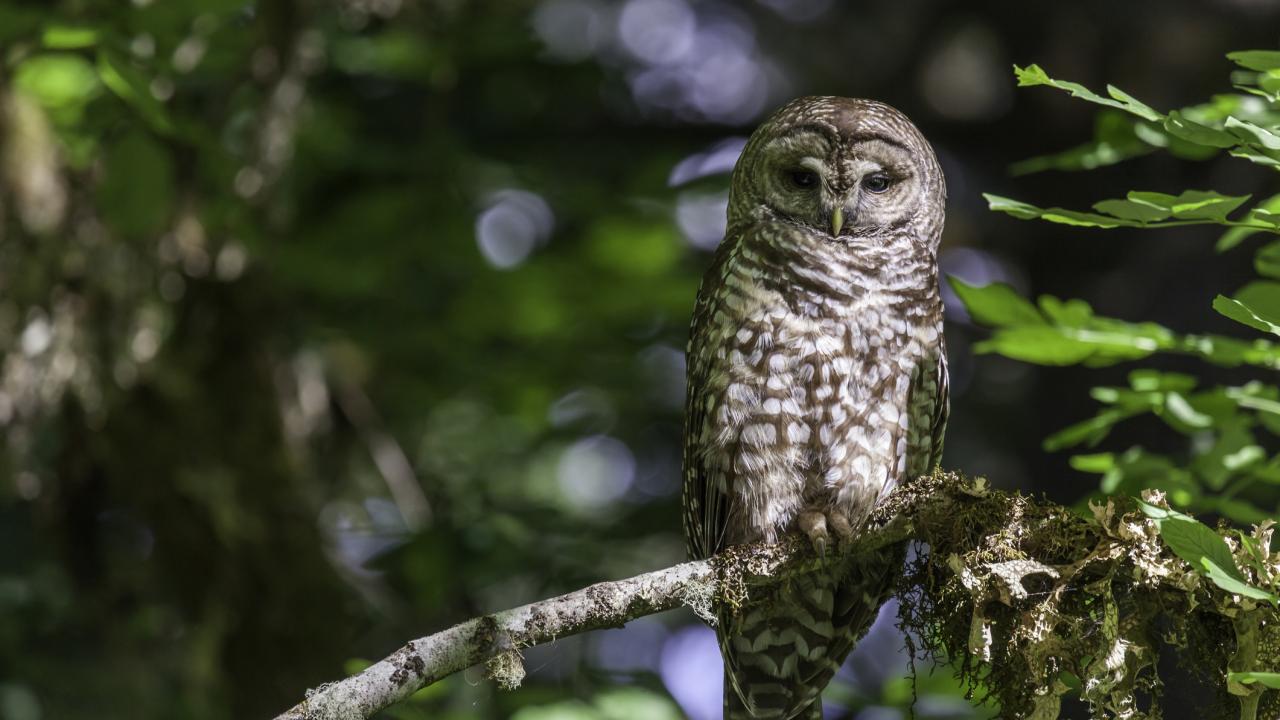 A Win-Win for Spotted Owls and Forest Management

Study: Supporting Owls Is Compatible With Managing Forests for Fire and Drought

Remote sensing technology has detected what could be a win for both spotted owls and forestry management, according to a study led by the University of California, Davis, the USDA Forest Service Pacific Southwest Research Station and the University of Washington.

For 25 years, many forests in the western United States have been managed to protect habitat for endangered and threatened spotted owls. A central tenet of that management has been to promote and retain more than 70 percent of the forest canopy cover. However, dense levels of canopy cover leave forests prone to wildfires and can lead to large tree mortality during droughts.

In the study, published in the journal Forest Ecology and Management, scientists found that cover in tall trees is the key habitat requirement for spotted owl — not total canopy cover. It indicated that spotted owls largely avoid cover created by stands of shorter trees.

“This could fundamentally resolve the management problem because it would allow for reducing small tree density, through fire and thinning,” said lead author Malcolm North, a research forest ecologist with UC Davis’ John Muir Institute of the Environment and the USDA Pacific Southwest Research Station. “We’ve been losing the large trees, particularly in these extreme wildfire and high drought-mortality events. This is a way to protect more large tree habitat, which is what the owls want, in a way that makes the forest more resilient to these increasing stressors that are becoming more intense with climate change.”

The previous tree canopy guidelines were largely drawn from past studies showing that spotted owls were more prevalent in forests with 70 percent or higher tree canopy cover. But those studies could not distinguish whether the presence of tall trees or high canopy cover were more important to the owl.

For this study, scientists at the University of Washington used the relatively new technology of light detection and ranging imaging, or LiDAR. The tool uses laser pulses shot from an instrument mounted in an airplane to measure a forest’s canopy in detail. The study’s authors used it to measure the height and distribution of tree foliage and forest gaps across 1.2 million acres of California’ Sierra Nevada forests.

Researchers used LiDAR imaging, such as this point cloud representing good habitat for spotted owls, to determine that tall trees rather than total tree cover are most important for spotted owls. (Credit: Jonathan Kane/University of Washington)

“Field-based studies of forests are expensive and time-consuming, which means that measurements are generally taken over areas a fraction of an acre,” said co-author Van R. Kane, an assistant research professor at the University of Washington. “We believe this is the largest spotted owl study yet in terms of the area of forest examined.”

The authors also used a data set collected by wildlife researchers spanning more than two decades that recorded the positions of 316 owl nests in three national forests and Sequoia and Kings Canyon national parks. They found the owls seek out forests with unusually high concentrations of tall trees measuring at least 105 feet tall but preferably taller than 157 feet. These tall trees also tended to be areas with high levels of canopy cover. However, the owls appeared to be indifferent to areas with dense canopy cover from medium-height trees and avoided areas with high cover in short (less than 52 feet tall) trees.

What is important for owls

“The analysis helps change the perception of what is important for owls — the canopy of tall trees rather than understory trees,” said co-author and spotted owl expert R.J. Guitiérrez, a professor emeritus with the University of Minnesota. “The results do not mean a forest should be devoid of smaller trees because owls actually use some of those smaller trees for roosting. But it suggests a high density of small trees is likely not necessary to support spotted owls.”

The data analysis was funded by the USDA Forest Service. Carnegie Airborne Observatory data collection and processing were funded by the David and Lucile Packard Foundation and the U.S. National Park Service.