As a Student Intern, She Brings Poetry to Campus Lab

Self-doubt almost stopped Alexandra Huynh of Carmichael from entering the high school classroom where a UC Davis program was offering students an opportunity to present their poetry.

Then a junior at Mira Loma High School, Huynh hadn’t yet given public voice to her poems. But a phone call to her sister reassured her she had nothing to lose.

Now, two years later, the 18-year-old is the new National Youth Poet Laureate. She will serve as a representative of youth voice, perform on national stages and facilitate workshops for other young poets.

Saying it in SAYS

“SAYS really gave me a platform to tell my story,” Huynh said. “I felt I could speak authentically to my experience.

“The support gave me a sense I could have agency in my own community,” she added. “It empowered me to enact change in every area of my life, whether it is in poetry or not.”

“This is such a mic drop moment for Sacramento,” Vajra Watson, who founded SAYS in 2008 and led the program until recently, shared in a Facebook post.

Huynh has won the national title as spoken word poetry enjoys a new spotlight: Poet Brandon Leake of Stockton, California, won America’s Got Talent in September; and Amanda Gorman, National Youth Poet Laureate in 2017 and a woman with ties to Sacramento, impressed the nation at the presidential inauguration in January.

"This is a huge opportunity for youth to visualize how much agency they can manifest when they are given the tools to become authors of their own lives," said Patrice Hill, who is the current director of SAYS and brought the Youth Poet Laureate program to Sacramento in 2016.

In her national role, Huynh said, she is looking forward to presenting workshops for young writers and working on projects to provide a platform for other Asian American writers. “I feel most fulfilled when I connect with people who are writing poetry with me,” she said.

Huynh’s own poetry takes on the inequities in education and climate change. “Poetry is a way,” she said, “to humanize issues that are too often reduced to quantifiable measures.”

She interns in UC Davis lab

A 2020 high school graduate, Huynh will start science studies at Stanford University in the fall. In this gap year, she has presented weekly workshops as artist-in-residence at her high school, led recreational programs for children, volunteered with the Farmlink Project that recovers surplus produce for food banks and worked in the lab of Associate Professor Catherine Brinkley at UC Davis.

“It has been so exciting this year to follow Alex’s work and celebrate it,” Brinkley said of Huynh’s poetry.

As a student intern, Huynh has been doing research on the internet to identify direct farm-to-consumer sales to help write the California County Community Food Guides in support of local food systems.

In early April, she was asked to open a lab meeting with a poem. “Our lab group has been so lucky to have Alex put words to the heartache of the pandemic, the courage and the joy,” Brinkley said. 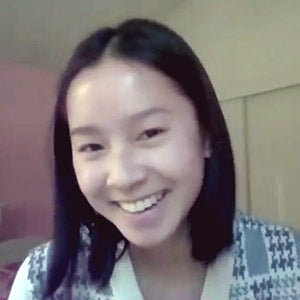 Watch a video of Alexandra Huynh, the new National Youth Poet Laureate, sharing a poem to open a meeting for a UC Davis lab, where she is a student intern.