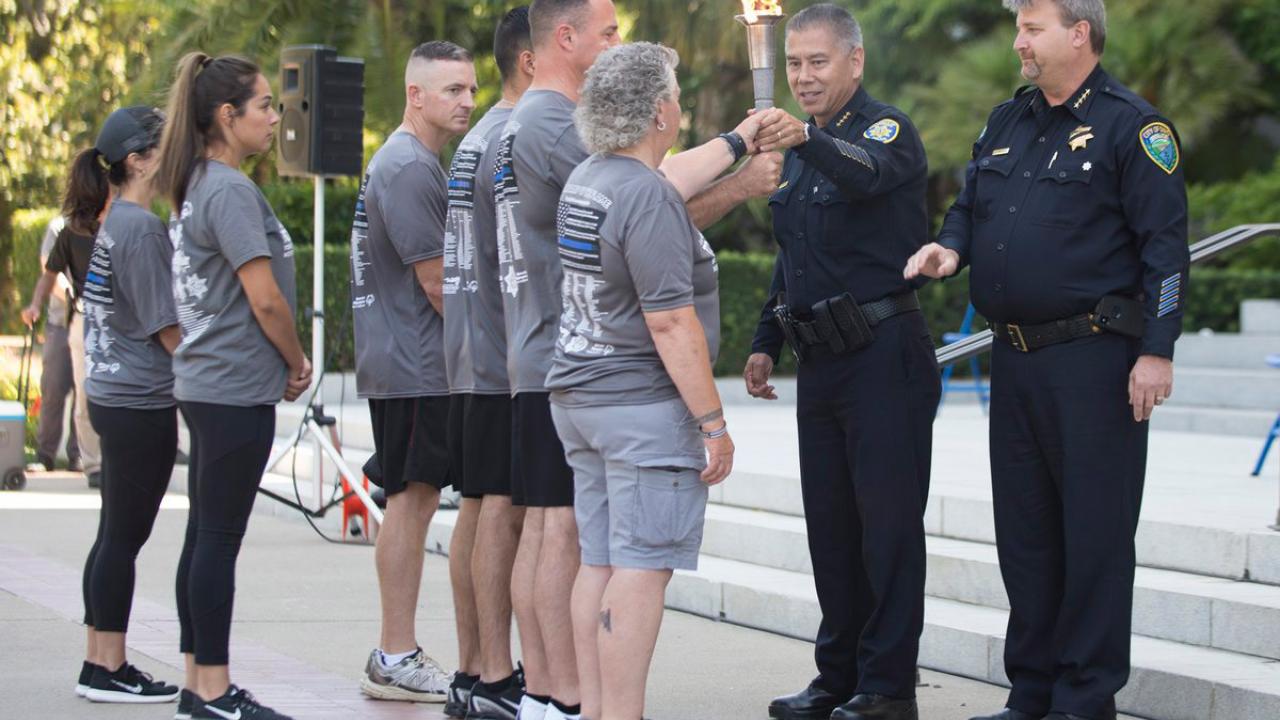 Police, in Their Grief, Rally for Special Olympics

A rough week for law enforcement concluded with police from UC Davis and elsewhere rallying in a big way for Special Olympics, by raising nearly $173,000 in the Torch Run that led to the Northern California Summer Games held at UC Davis.

Friday (June 21), officers carried the torch to its last stop: The Pavilion at the Activities and Recreation Center where upwards of 700 Olympians and hundreds of their supporters had gathered for the Opening Ceremony. The program included a tribute to two slain police officers, Natalie Corona of the Davis Police Department, shot Jan. 10 on a downtown street; and Tara O’Sullivan of the Sacramento Police Department, gunned down during a domestic disturbance call last Wednesday (June 19).

Chancellor Gary S. May issued a statement the next day:

“The UC Davis community is deeply saddened by the tragic death of Sacramento police officer Tara O’Sullivan. We know all too well the heartbreaking loss of a young police officer killed in the line of duty.

“At times like this, we are reminded of those in our communities who are dedicated to protect us at any cost. We extend our condolences to officer O’Sullivan’s family, friends and fellow officers of the Sacramento Police Department. We grieve with you.”

“This hits home on so many different levels,” Farrow said. He described all three rookies as strong young men, “but obviously you can tell they were impacted.”

“When officer O’Sullivan was killed, it was instant realization of the hazards and the risks associated with police work in America,” the chief said. “Danger lurks at any moment, you can’t predict it. They got a flash of that.”

Lee and Williams joined the chief at the Sacramento Police Academy for Uribe’s graduation June 20. All three rookies went through the campus Police Department’s Cadet Academy before graduating from UC Davis with scholarships to the regular academy, and job offers back on campus.

Chief Farrow said his rookies are taking advantage of peer support programs and other resources during this trying time, and have been given time to attend O’Sullivan’s services.

Despite heavy hearts, Farrow and more than a dozen others from the campus Police Department did their part in the Torch Run — carrying the Flame of Hope from the Davis Police Department to campus. They were running for Special Olympics, of course, but also for their fallen comrades.

“When things like this happen, our communities are wounded,” the chief said. “The Torch Run gave people the opportunity to come out and show their support for law enforcement.

“The applause along the way, the cheers, the shouts of ‘be careful,’ it all means a lot to our officers,” Farrow said.

Officer Corona had participated in the Torch Run several times when she worked as a community service officer for the Davis Police Department and later as an officer. Friday, her parents, Lupe and Merced, carried the torch into The Pavilion, which was the location of their daughter’s funeral service.

Sonseeahray Tonsall: Carrying the torch for their fallen daughter.... as she did for @SONorCal athletes. @cityofdavispd Officer Natalie Corona honored along with fallen @SacPolice Officer Tara O'Sullivan as the Summer Games open. @FOX40

The Coronas used the torch to light the cauldron inside The Pavilion, officially opening the Summer Games. The Special Olympics then presented the Coronas with the Law Enforcement Torch Run Memorial Medal.