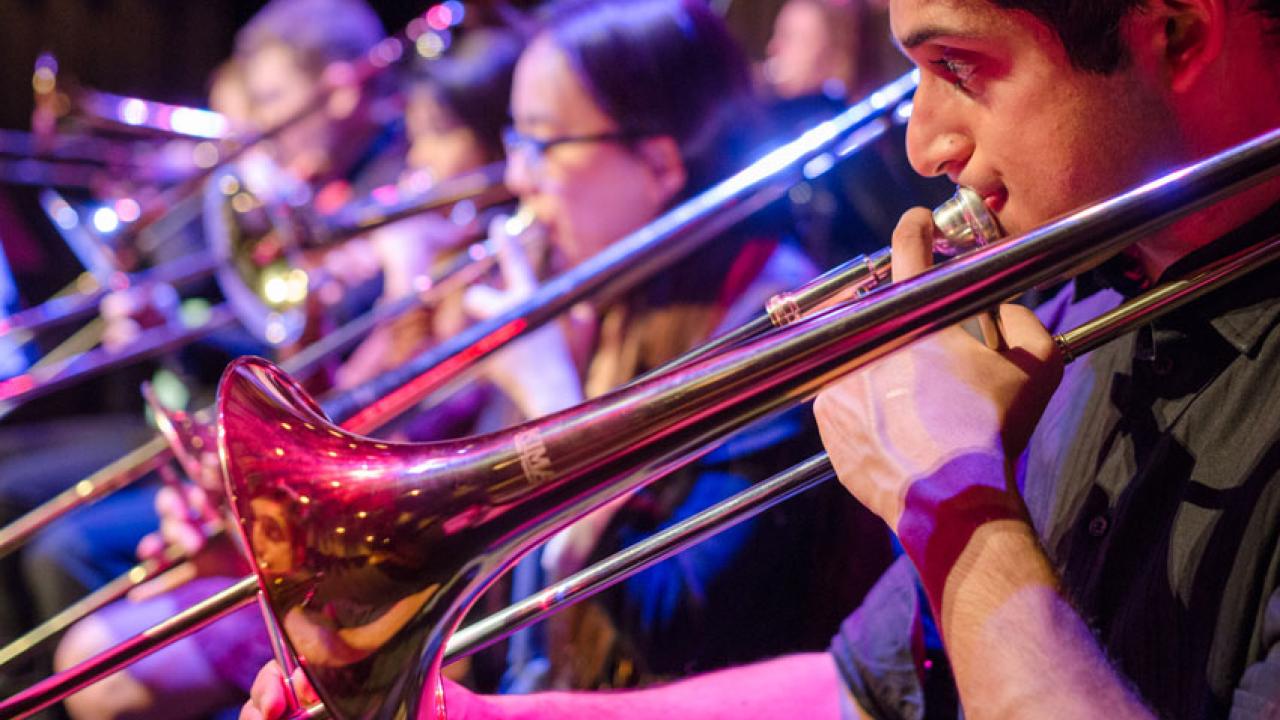 The full range of music-making and learning at the University of California, Davis, will get a big boost in September with the opening of the Ann E. Pitzer Center. The state-of-the-art building houses classrooms, practice rooms and the acoustically pristine, 399-seat Recital Hall that will host dozens of concerts each year.

The center is named in honor of the late Ann E. Pitzer, UC Davis graduate who bequeathed $5 million toward the facility’s construction.

"I wanted to give back because going to UC Davis made a big, positive difference in my life," said Pitzer in a 2013 interview. "The breadth of knowledge I received and the self-confidence I gained at UC Davis served me well in a number of career changes in my life."

The center’s grand opening takes place the weekend of Sept. 23-25 with the imaginative Anderson & Roe Piano Duo; concerts showcasing the musical talents of UC Davis faculty and students; and a screening and discussion of the film Koyaanisqatsi.

The music program, which offers undergraduate and graduate degrees across a variety of disciplines, had grown out of its space. The new Pitzer Center provides more than 17,000 square feet of additional classroom and performance space, augmenting the existing Music Building next door. The majority of music department concerts, ranging from classical to jazz to gamelan, including the popular free Shinkoskey Noon Concerts, will be held in the center. Larger performances, such as those by the UC Davis Symphony Orchestra, will continue to be held at the Robert and Margrit Mondavi Center for the Performing Arts.

The Recital Hall will be the perfect size for most music department programs with easy access and comfortable seating. Its high-level acoustical properties were designed by David Kahn, a founder and principal of Acoustic Distinctions, which has designed music halls and theaters around the world. A similar level of care went into the acoustical design of the rehearsal rooms. Practice rooms are even sound isolated in a way that separates them from the rest of the building

“The Pitzer Center will be a great enhancement to all aspects of the music program and also provide classroom space for many disciplines,” said Susan Kaiser, interim dean of the Division of Humanities, Arts and Cultural Studies in the College of Letters and Science. “Our students and faculty will benefit greatly from this beautiful new facility that will enrich teaching and learning. It will also be a welcoming, comfortable and wonderful sounding place for those who attend our music programs from across the university and throughout the region.”

Several UC Davis faculty members have been integral to making the center possible, according to Kaiser: Jessie Ann Owens, a music professor and former dean of the Division of Humanities Arts and Cultural Studies; D. Kern Holoman, distinguished emeritus music professor and dean; and music professor Henry Spiller, who was the music department chair during building construction.

“We are thrilled to open a facility where students, faculty and guest artists will be able to enjoy more and better space for learning, a state-of-the-art recording studio and a splendid, professional venue for performances, along with many other amenities,” said Carol Hess, music department chair. “It’s gratifying to see how generous the donors have been and how the faculty and staff have given of themselves throughout the entire process.”

Hess, a musicologist who in 1994 became the first person to earn a doctorate in music at UC Davis, recalled her time as a student in the music department. “When I was a student here we always dreamed of better facilities,” she said. “When I returned to Davis in 2012, I was amazed and happy to see that plans for a new building were underway.”

Music major Steven Ilagan said, “Each walk I’ve taken through its stages of completion has left me more excited every time. How lucky am I to have access to such a beautiful building for my final undergrad year? As awesome as that feels, I can only imagine what amazing things future music students will do with the Pitzer Center.”

The Ann E. Pitzer Center is located at Old Davis Road and Hutchison Drive adjacent to the art, theatre and dance, and music buildings and the UC Davis Arboretum, and within a short walk of the Mondavi Center and the new Jan Shrem and Maria Manetti Shrem Museum of Art, which is scheduled to open in November.

Concert by Faculty and Students of UC Davis

Tickets now available for these events and all others in the 2016-17 music season. Ticket information is included in the schedule of events here.

Designers and builders — LPAS Architects and construction company Kitchell, both of Sacramento. The acoustical properties of the hall were designed by David Kahn, a founder and principal of Acoustic Distinctions, whose work includes the Peabody Conservatory of Music in Baltimore; the Woolly Mammoth Theatre in Washington, D.C.; and the Royal Shakespeare Company theatre in Stratford, Great Britain.

Project costs — $16.8 million. Private donations: Ann E. Pitzer, $5 million to name the building, the first on campus to be named in honor of a female graduate; Grant and Grace Noda, $1.5 million to name the lobby; $2.3 million from other individuals, including a $350,000 gift from Barbara K. Jackson to name the stage. Acquired funds beyond the final project cost have been placed in an endowment account for maintenance costs. Fundraising for the endowment is ongoing to strengthen a perpetual source of support for the building. Tax-exempt bonds financed the remaining $10 million. No student tuition, fees or state funds were used.