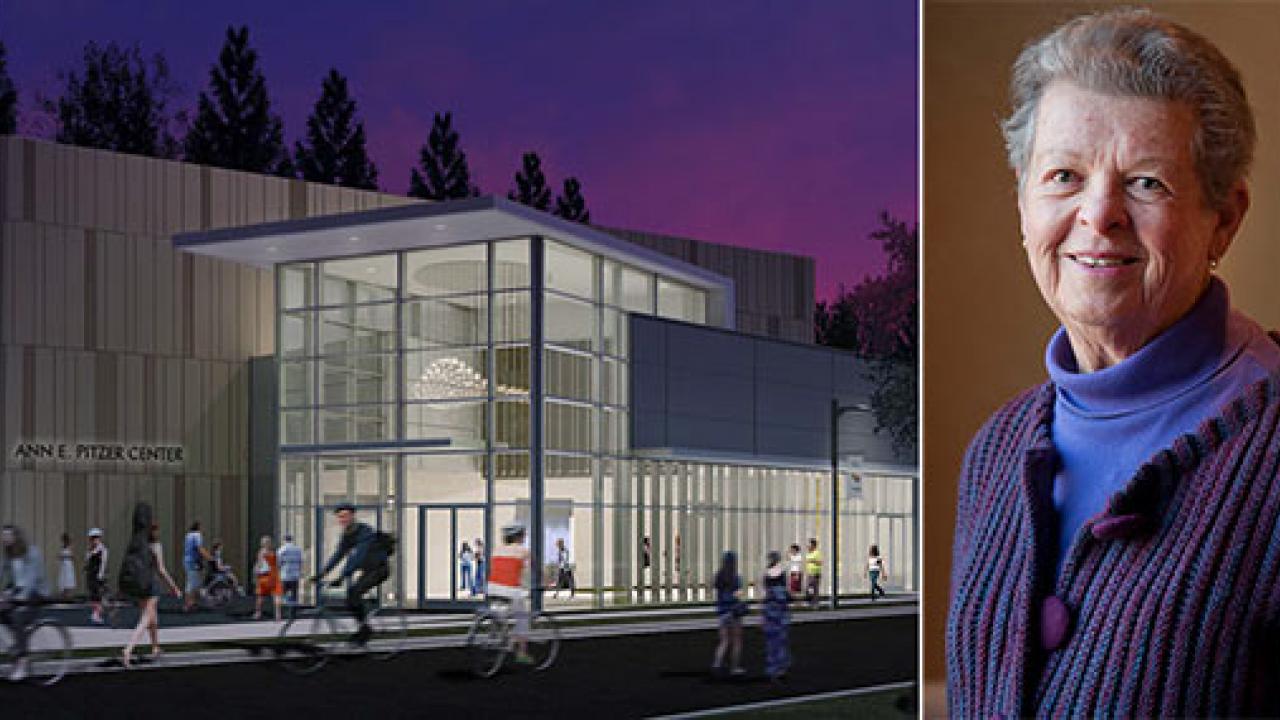 A new classroom and recital hall building at the University of California, Davis, will be named the Ann E. Pitzer Center to honor an alumna who donated $5 million toward the building. The gift from the late Ann E. Pitzer and the naming were announced Thursday (Nov. 13) evening at a reception for the UC Davis Foundation Board and guests.

Pitzer, a well-known California philanthropist, graduated from UC Davis in 1958 with a degree in home economics and was a longtime and active supporter of the university. She died on Oct.15.

“Ann was a tremendous alumna and friend of UC Davis who always said her motivation for giving to UC Davis was to ensure our students would have the same great experience at UC Davis that she had,” Chancellor Linda P.B. Katehi said. “This building, which will provide important classroom space to all UC Davis students, is a shining example of Ann’s lasting legacy, her commitment to her alma mater and to all Aggie students, and her love of music.”

The Ann E. Pitzer Center is scheduled to open in early 2016 and will include a recital hall, classrooms and practice rooms.  The gift from Pitzer will allow for construction of practice rooms and facility enhancements and support.

A former member of the UC Davis Foundation Board of Trustees, Pitzer has a long history of giving to her alma mater. She created the Ann E. Pitzer scholarship and donated $1 million to the UC Davis Education Abroad Center to create a study abroad award endowment. This challenge gift in turn has inspired other donors to give $475,000 to date to support UC Davis students in studying abroad. Additionally, along with fellow UC Davis classmates, Pitzer established the Class of ’58 Scholarship, an endowed fund supported through gifts from the class of 1958. She was a 2013 recipient of the Cal Aggie Alumni Association's Aggie Service Award, which honors a UC Davis graduate who has demonstrated pride and dedication to the university through sustained volunteerism and leadership.

“I wanted to give back because going to UC Davis made a big, positive difference in my life,” she said in a 2013 interview. “The breadth of knowledge I received and the self-confidence I gained at UC Davis served me well in a number of career changes in my life.”

A resident of La Jolla, California, Pitzer earned a master’s degree in textiles from UC Berkeley, and during her life had careers in software development, agricultural extension and the arts. Her grandfather was Russell K. Pitzer, a California citrus grower who founded Pitzer College in Claremont. Her father, Kenneth S. Pitzer, served as president of Rice and Stanford universities. At Pitzer College, she funded several endowed scholarships and gave to help support the director of International Programs position.

About the Ann E. Pitzer Center

The 17,000-square foot classroom and recital hall will provide much-needed classroom space for many divisions of the university, as well as rehearsal studios, a recording control room and a production office. The centerpiece is a 394-seat recital hall, which will host about 100 concerts a year and serve as a lecture hall as well. The building is adjacent to current music, theater, dance and art facilities, and close to the Robert and Margrit Mondavi Center for the Performing Arts, and the future home of the Jan Shrem and Maria Manetti Shrem Museum of Art. The building on Hutchison Drive is being designed and constructed by LPAS Architects and construction company Kitchell, both of Sacramento. Private gifts and tax-exempt bonds will finance the cost and no student tuition, fees or state funds will be used.

“Ms. Pitzer's gift will provide beautiful and functional spaces for the entire gamut of music students' activities -- from lonely hours in the practice rooms, through rehearsals and coaching in the studios, to breathtaking performances on first-rate instruments in an acoustically superb recital hall,” said Henry Spiller, music department chair.

About the Department of Music

About the UC Davis Foundation

The UC Davis Foundation is a nonprofit organization that is governed by a volunteer board of trustees who play an essential role in sustaining and enhancing the excellence of UC Davis by highlighting the impacts of philanthropy and stewarding private donations to the university.