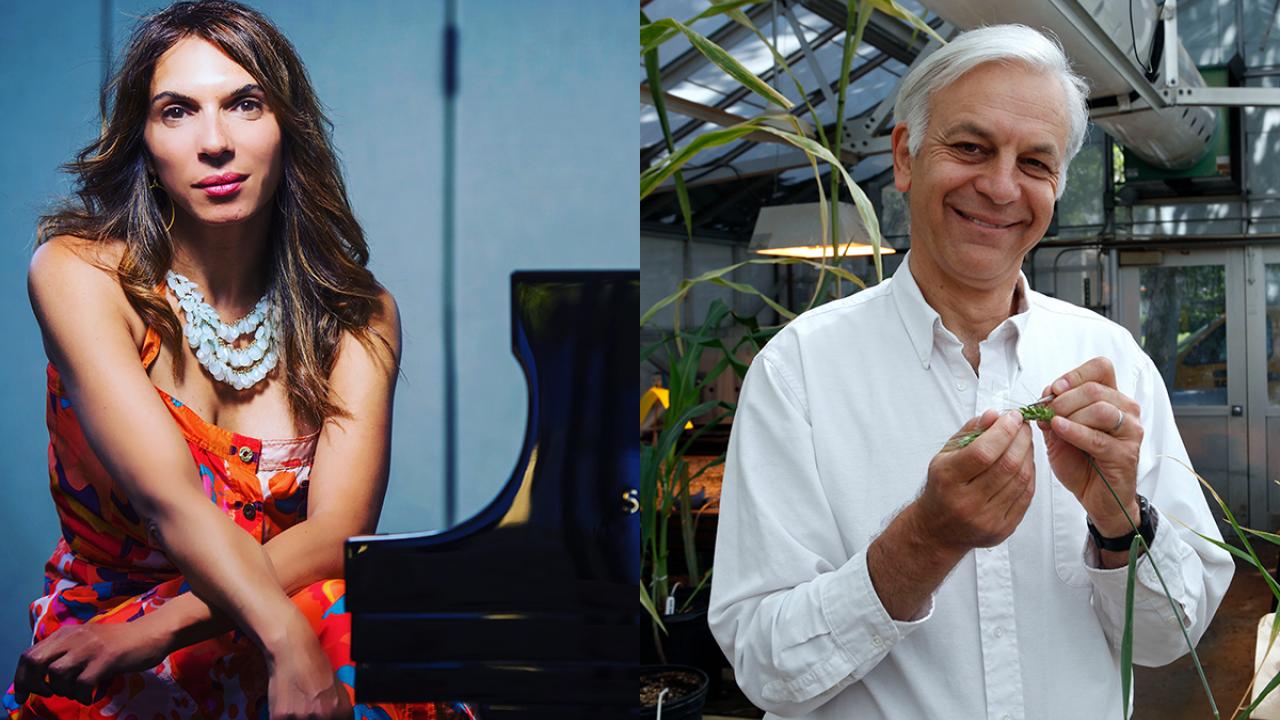 Pianist, Wheat Geneticist Recipients of 2017 Innovator of the Year Awards

Lara Downes, artist in residence at the Mondavi Center for the Performing Arts, and Jorge Dubcovsky, distinguished professor of plant sciences and Howard Hughes Medical Institute researcher, were named the 2017 Innovators of the Year by University of California, Davis, Interim Chancellor Ralph J. Hexter at a ceremony on campus tonight.

These awards, which are part of the UC Davis Chancellor’s Innovation Awards, recognize individual faculty, staff or teams whose inventive accomplishments have had a measurable societal impact or present very strong potential to do so. Recipients of the award receive $10,000 that can be applied to their research or societal engagement program.

“UC Davis takes great pride in being a comprehensive university, one that, in fact, teaches and pursues research in more disciplines and professions than any other UC campus. It is thus very fitting that the two recipients of the 2017 Innovator of the Year Award vividly reflect our breadth, while also showing that impactful innovation can be found across the disciplinary spectrum,” said Hexter.

“Lara Downes, through her many stellar contributions in the field of music, has furthered UC Davis’ goals of artistic excellence, high-quality education, and promoting understanding among people from diverse backgrounds,” Hexter said. “And Jorge Dubcovsky, though his groundbreaking work in wheat breeding and genetics, has made major contributions in an area in which UC Davis is very proud to play a leadership role — feeding the world.”

Downes is an internationally recognized pianist and recording artist who has touched many people not only through her albums and performances but also through her outreach and mentorship work with youth nationwide. She is artist in residence at the Mondavi Center for the Performing Arts at UC Davis and also director of the center’s National Young Artists Program, which mentors the next generation of young musicians.

Downes’ artistic works span many genres. In October 2016, she released the album, America Again, which was inspired by Langston Hughes’ 1935 poem, “Let America Be America Again.”

Downes was moved by Hughes’ exploration of race and the American dream and found the themes still resonate today. She sees her music as building bridges.

“Music starts conversations,” said Downes. “Music is a place where people can come together from different perspectives and different backgrounds — and maybe even different sides of a divide — and find some common ground.”

America Again debuted in the top 10 on the Billboard Classical charts and was picked by NPR as one of “10 Classical Albums That Saved 2016.” This past year she collaborated with U.S. Poet Laureate Rita Dove to launch the My Promise Project, a community transformative initiative that focuses on themes of promise, potential, citizenship, community, compassion, communication, self-awareness and self-esteem.

Dubcovsky is a world-renowned wheat breeder and wheat geneticist whose recent innovation has greatly accelerated the study of gene function in wheat. His laboratory developed a gene capture tool and used it to sequence most wheat genes in a collection of 2,700 mutant lines.

“We have created a public database that contains 10 million mutations that can be used to find loss-of-function mutations in almost any wheat gene,” said Dubcovsky. Researchers can search this public database online and request the seeds carrying the desired mutations. More than 3,000 of these seed stocks have been distributed already to wheat researchers around the world.

Wheat provides 20 percent of the calories and 23 percent of the protein consumed by humans. More than 700 million tons of wheat are produced worldwide each year, meaning even small improvements can have a significant impact.

“In these times of climate change, resilience is important. You need to be able to respond to changes fast,” said Dubcovsky. His lab has used this technology to increase grain dietary fiber and size, and incorporated these traits into UC wheat varieties with increased grain protein content and improved resistance to diseases previously developed by his program.

Established in 2016, the UC Davis Chancellor’s Innovation Awards recognize faculty, community partners and industry leaders for their work, dedication and success in achieving societal impact either through innovations in technology or social engagement.

“The public mission of UC Davis is inextricably linked with the innovative spirit that drives our faculty, students and staff to transform their research, academic pursuits and passion into life-changing societal impact,” said Dushyant Pathak, associate vice chancellor for research and executive director of Venture Catalyst at UC Davis. “This year’s recipients of the Chancellor’s Innovator of the Year awards allow us to celebrate the unique range of innovation being fostered at UC Davis and the university innovators who are making their mark on the world.”

In addition to the Innovator of the Year, awards were presented to Vivek Ranadivé and the Sacramento Kings organization for the Innovative Community Partner of the Year and to Gary Snyder, professor emeritus of English, for the Lifetime Achievement Award for Innovation. Both of those awards were announced in a press release last week.