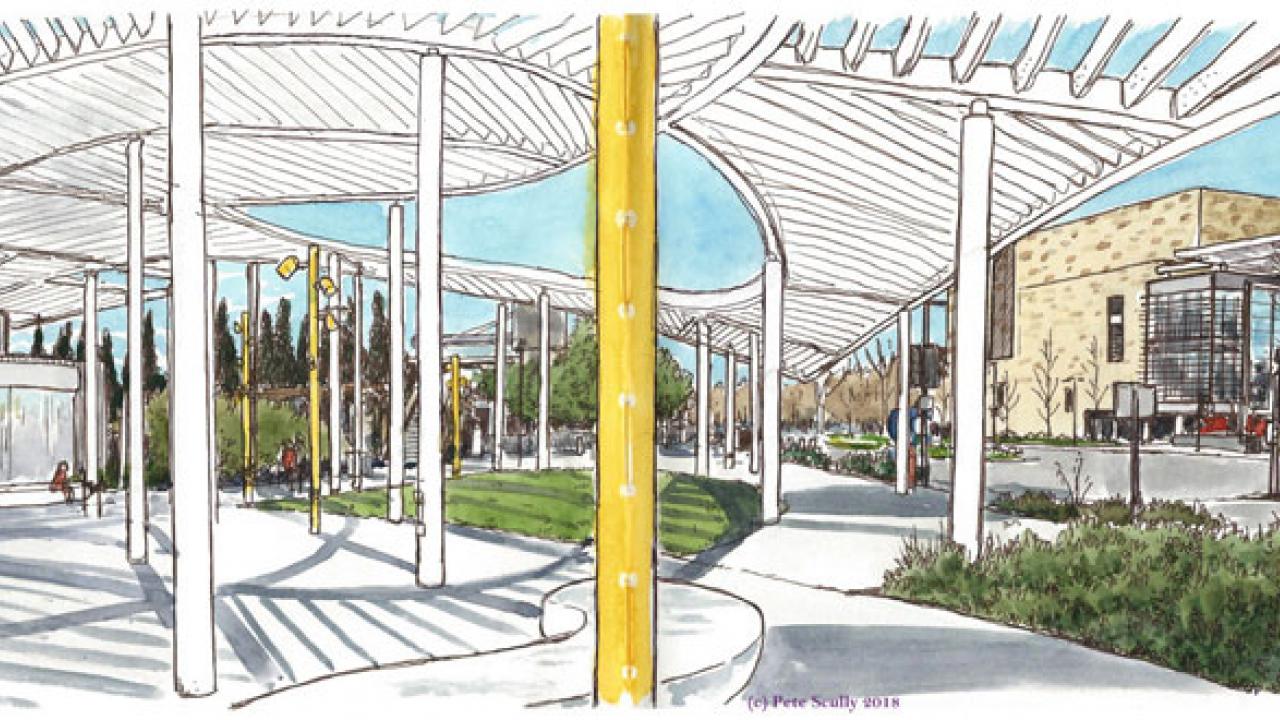 NEWS BRIEFS: Be Cool to Your School in Cool Campus Challenge

UC’s second Cool Campus Challenge is underway — and, as of this morning, Davis was lagging in participants and points. So, let’s step it up! Start by registering here, then check out the simple actions you can take to reduce your carbon footprint, and start checking them off your list. Every action completed will earn points for you and UC Davis.

One thing you can do is attend a sustainability event on campus — including “Roots on Campus” tree plantings and, just added, a pair of “sketch crawls” with a green flair, led by none other than sketch artist extraordinaire (and UC Davis employee) Pete Scully. “Sustainability” will be the sketching theme, say, bicyclists or compost bins or green buildings.

Here are the details on these events and more:

The Office of Sustainability will be tabling at the farmers market on the Quad, 11 a.m. to 1:30 p.m. Wednesdays, April 3, 10 and 24, providing information on the Cool Campus Challenge (and the opportunity to register on the spot). People can also learn about UC’s Carbon Neutrality Initiative and win T-shirts or tote bags.

Police pursuit ends at back end of bus

A Unitrans driver reacted “fantastically” well Monday morning (April 1) when a police pursuit came to a crashing halt at the back end of his bus on the L Line in east Davis — that is, when a suspected stolen van rear-ended the single-decker bus on Monarch Lane at Temple Drive near Slide Hill Park at 11:23 a.m., after which officers pulled up quickly.

“When the driver saw the police draw their weapons to approach the incident van, he told everyone to get down,” said Jeff Flynn, general manager of the city-campus bus system. He said the driver, Dakotah Brandow, a graduating senior, “did a fantastic job assessing the scene and taking care of our customers.”

No one was injured, not the bus driver or his seven passengers, Flynn said. The bus was a different story: “It’s down for the count,” having taken a hit to the engine. “Significant damage, unfortunately, and we had to tow it.”

Police arrested the van’s driver, identified as 48-year-old Paul Joseph Wortmann of Sacramento. He was taken to UC Davis Medical Center with moderate injuries, police Lt. Paul Doroshov said, who added that the case had been forwarded to the Yolo County district attorney’s office.

Doroshov said the pursuit began in West Sacramento when officers there attempted to stop the van after seeing it being driven recklessly. The driver sped away on Interstate 80, across the Yolo Causeway, exiting at Mace Boulevard, where Davis police took over.

Officers called off the chase due to public safety concerns, but kept following as the van drove into the neighborhood southwest of the intersection of East Covell Boulevard and Alhambra Drive. The crash occurred a block away from Slide Hill Park.

Staff, faculty and graduate students are invited to be facilitators of First-Year Aggie Connections in the fall — a unique volunteer opportunity whereby you will engage in discussions with new freshmen and transfer students to help them transition to life at UC Davis.

Facilitators will meet weekly with their “connections,” or groups, of up to 25 students each, through the quarter.

Each connection has a theme centered around a shared purpose, identity or interest. Prospective facilitators are asked to develop their own theme proposals — and you can get help with this part of the process during a workshop, noon-1 p.m. Wednesday, April 17, in 114 South Hall.

The workshop comes two weeks before the suggested deadline of May 1 for theme proposals. See this “Become a Facilitator” webpage for more information and a link to the proposal form.

Speaking of new students … or, rather, prospective students ... more than 6,000 admitted freshmen and family members will descend on campus this Saturday (April 6) for Decision UC Davis, held annually during the period when admitted students are considering whether to enroll.

Decision UC Davis is a free one-day program during which the prospective students can experience campus life and learn more about the university.

A second Decision UC Davis is scheduled for Friday, May 10, for transfer students.

President Janet Napolitano apologized Monday (April 1) to UC Retirement Plan benefit recipients for a delay in first-of-the-month direct deposits. “While this file error in the transfer process was corrected within hours, I was troubled by this incident,” Napolitano said in a statement posted to UCnet. “Retirees and their families are an important part of the UC community, and I wanted to extend a personal apology for any confusion or other issues you may have faced as a result of this error.”

According to her message, all payments for standard UCRP retirement, disability and-or survivor benefits had been posted by the close of business Monday, but that payments for non-UCRP (PERS Plus 5 and Restoration Plan) benefits had taken additional time and would be posted today (April 2).

Napolitano said people who incur late fees or other penalties, because or tardy check deposits, should contact the UC Retirement Administration Service Center (send email to customerservice.reply@ucop.edu). “UC is committed to making the situation right,” she said.

“We deeply regret and are very sorry for the uncertainty and inconvenience this delay may have caused,” Napolitano said. “Trust that we are making every effort to prevent this from happening again in the future.”