Wildlife species are being exposed to high levels of rat poison in northwest California, with illegal marijuana farms the most likely source point, according to a study led by the University of California, Davis, with the California Academy of Sciences.

The study is the first published account of anticoagulant rodenticide in northern spotted owls, which are listed as a threatened species under federal and state Endangered Species acts.

The study area encompasses Humboldt, Mendocino and Del Norte counties. It supports previous accounts that rat poison is contaminating the food web in this region, as the primary food source for owls — rodents — is being contaminated.

Driving the issue is the increasing conversion of private timberland into private, illegal and unpermitted marijuana cultivation sites. These sites often overlap with designated critical habitat for northern spotted owls, and the owls feed at their edges.

Gabriel’s studies in 2012, 2013 and 2015 were the first to link rat poison and illegal marijuana farms to the deaths of fishers, a weasel-like mammal living in remote forests of California and the Pacific Northwest, bringing broad attention to the issue. 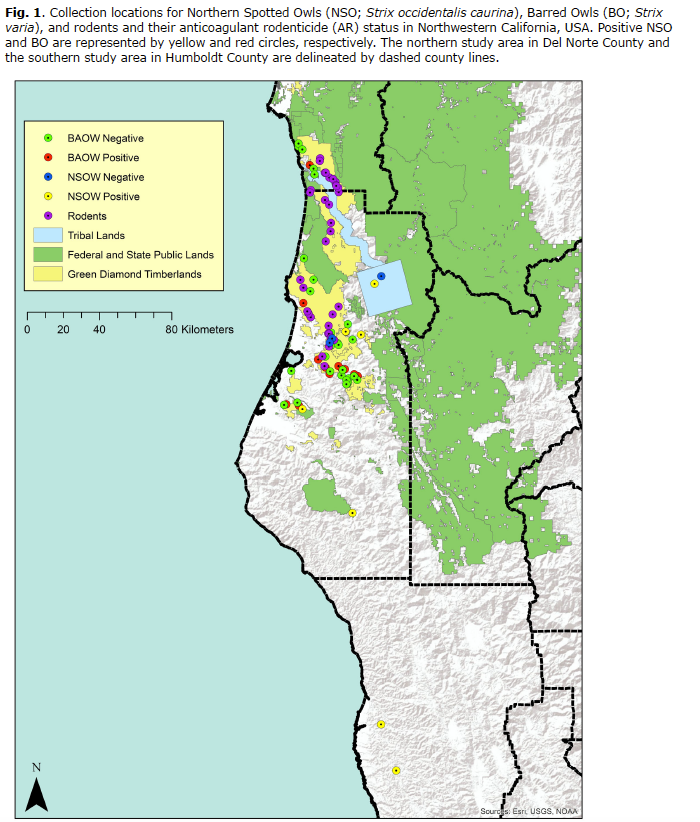 The study authors note that an estimated 4,500 – 15,000 private cultivation sites are in Humboldt County alone, yet the county has seen legal permits for only a small fraction of them. That means there are thousands of unpermitted private grow sites with no management oversight.

“When you have thousands of unpermitted grows and only a handful of biologists that regulate that for multiple counties, we’re deeply concerned that there aren’t sufficient conservation protective measures in place,” Gabriel said. “If no one is investigating the level at which private marijuana cultivators are placing chemicals out there, the fragmented forest landscapes created by these sites can serve as source points of exposure for owls and other wildlife.”

Anticoagulant rodenticides inhibit the ability of mammals and birds to recycle vitamin K. This creates a series of clotting and coagulation problems, which can lead to uncontrollable internal bleeding.

Interested in a career studying wildlife and its habitat? This major prepares students who are dedicated to animal conservation and interested in the resolution of conflicts between people and wildlife. Students learn hands-on research skills and work closely with wildlife conservation organizations. Read more on our majors blog.

Barred owls are a physically larger group of owls currently competing for resources and space in critical habitat designated for northern spotted owls. Forty percent, or 34 of 84, of the barred owl tissue samples collected for this study tested positive for anticoagulant rodenticide. The owls are being exposed through the prey they eat.

“Access to these owl specimens allows us to explore the health of the entire regional forest system,” says Jack Dumbacher, curator of Ornithology and Mammalogy at the California Academy of Sciences. “We’re using our collections to build a concrete scientific case for increased forest monitoring and species protection before it’s too late to intervene.”

This study’s researchers did not kill any owls for this study. Northern spotted owls were opportunistically collected when found dead in the field, while barred owl tissue samples were provided by outside investigators conducting an unrelated barred-owl project.

The necropsies for this study were conducted at the California Academy of Sciences and the California Animal Health and Food Safety Laboratory System, which is part of the UC Davis School of Veterinary Medicine.

The study was funded by the United States Fish and Wildlife Service, Arcata and Yreka California Field Offices.