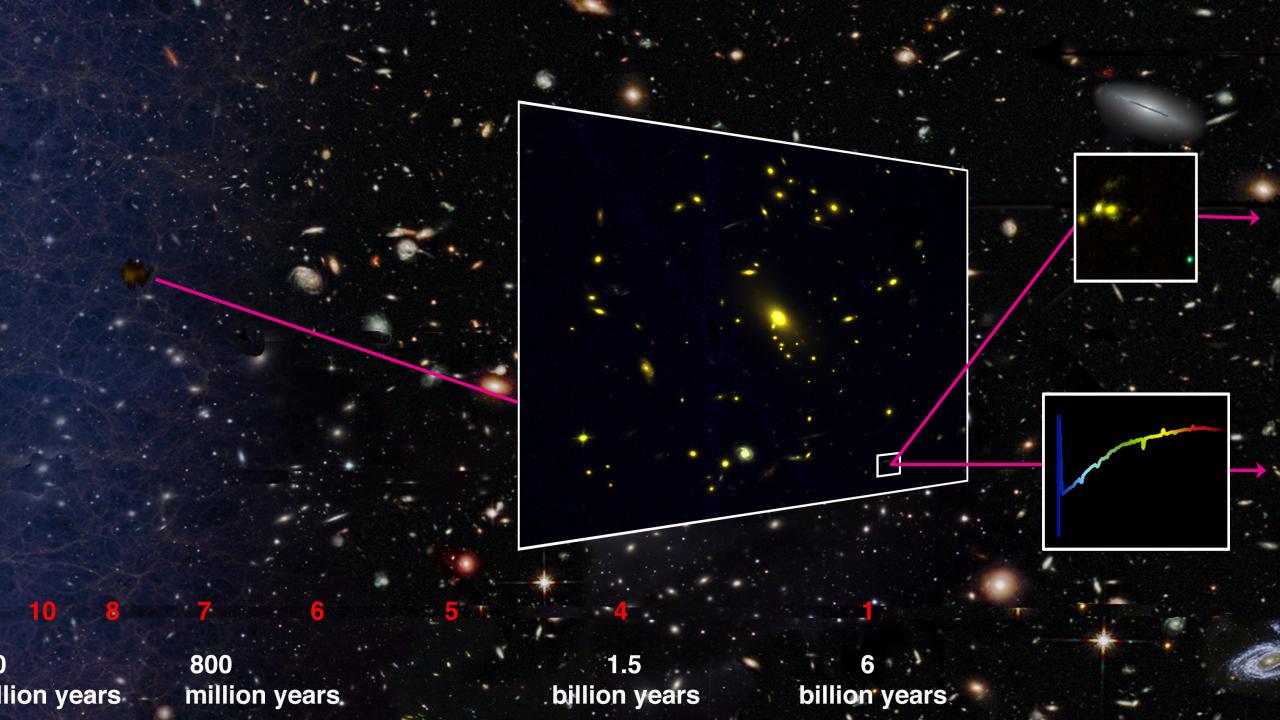 Long Ago and Far Away, an Average Galaxy

Astronomers led by a graduate student at the University of California, Davis, have discovered one of the most distant galaxies in the universe, and it’s nothing out of the ordinary.

“Other most distant objects are extremely bright and probably rare compared to other galaxies,” said Austin Hoag, a UC Davis graduate student in physics who is lead author on the paper, published April 10 in Nature Astronomy. “We think this is much more representative of galaxies of the time.”

These ultradistant galaxies, seen as they were close to the beginning of the universe, are interesting to Hoag, UC Davis physics professor Marusa Bradac, and collaborators in the U.S., Australia and Europe because they fall within the “Epoch of Reionization,” a period about a billion years after the Big Bang when the universe became transparent.

After the Big Bang, the universe was a cloud of cold, atomic hydrogen, which blocks light. The first stars and galaxies condensed out of the cloud and started to emit light and ionizing radiation. This radiation melted away the atomic hydrogen like a hot sun clearing fog, and the first galaxies spread their light through the universe.

Much remains lost in the fog of reionization.

“We have a before and an after, but not exactly a when,” Hoag said. There are also questions about what radiating objects drove reionization: Was it mostly young galaxies, or did objects such as black holes and gamma ray bursts contribute as well?

Galaxy cluster is a giant lens in the sky

The new object, named MACS1423-z7p64, is at a redshift of 7.6, putting it about 13.1 billion years in the past. (The farther away an object is, the farther its light is shifted into the red end of the spectrum, due to the expansion of the universe.) To find such faint, distant objects, the astronomers took advantage of a giant lens in the sky.

As light passes by a massive object such as a galaxy cluster, its path gets bent by gravity, just as light gets bent passing through a lens. When the object is big enough, it can act as a lens that magnifies the image of objects behind it.

Hoag and colleagues are surveying the sky around massive galaxy clusters that are the right size and distance away to focus light from very distant galaxies. While it is similar to millions of other galaxies of its time, z7p64 just happened to fall into the “sweet spot” behind a giant galaxy cluster that magnified its brightness tenfold and made it visible to the team, using the Hubble Space Telescope. They were then able to confirm its distance by analyzing its spectrum with the Keck Observatory telescopes in Hawaii.

The team plans to continue their survey of candidate galaxies with the Hubble and Keck telescopes. The upcoming launch of the James Webb Space Telescope, set for 2018, opens up new possibilities, Hoag said. The team is currently planning observations for the Webb telescope, which is bigger than Hubble and will allow astronomers to look at even more distant parts of the universe.

“We will truly witness the birth of the first galaxies which will allow us to answer the longstanding question, of where did we come from,” Bradac said.

Other authors on the paper are: at UC Davis, Kuang-Han Huang, Brian Lemaux and Julie He; Michele Trenti and Stephanie Bernard, University of Melbourne, Australia; Tommaso Treu, Louis E. Abramson, Charlotte Mason and Takahiro Morishita, UCLA; Kasper Schmidt, Leibniz-Institut für Astrophysik, Potsdam, Germany; Laura Pentericci, NAF Osservatorio Astronomico di Roma, Italy; and Tim Schrabback, Argelander-Institut für Astronomie, Bonn, Germany. The work was supported by NASA. The W.M. Keck Observatory is operated as a scientific partnership among the California Institute of Technology, the University of California and NASA and is made possible by the generous financial support of the W.M. Keck Foundation.