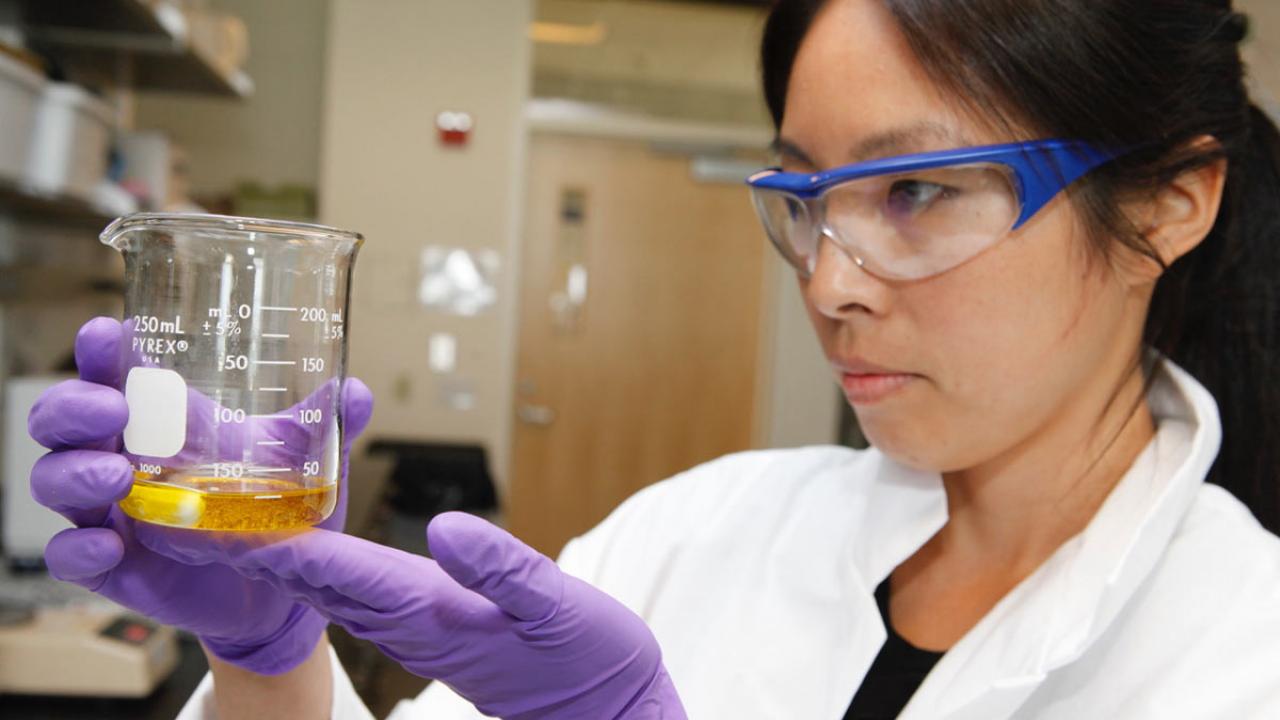 Wang joined the Olive Center as a postdoctoral researcher in 2010 and became research director in 2011, leading the center’s research efforts in olive oil quality, authenticity and standardization. She took on her Cooperative Extension duties in 2018. “I still do the work I’ve been doing with olives and olive oil, but now I cover all the crops that are important for California,” she said.

Research from the Olive Center contributed to the scientific basis for the establishment of California grade and labeling standards for olive oil, refined-olive oil and olive-pomace oil. Under the standards, producers of greater than 5,000 gallons per year must test every lot of oil for quality, thereby instilling confidence in consumers.

Wang said she looks forward to continued research on maximizing quality, health benefits, yield and sustainability — in the field and in processing. “We’ve made a tremendous amount of progress in the past decade, and there’s more work to be done, especially in response to climate change,” she said. “I will continue extension with the growers and processors and education with the students at UC Davis who are the future leaders.”

Dan Flynn, the recently retired Olive Center director, nominated Wang for the award. “Dr. Wang stands among the very best people I have worked with,” he said. “Her independent and significant research achievement, skill at attracting financial backing and resources, ability to inspire students, robust work ethic, dedication to the public interest and exceptional interpersonal skills place her among the noteworthy olive scientists globally.”

Jann Murray-García, a pediatrician and associate clinical professor at the Betty Irene Moore School of Nursing, has been named the 2021 recipient of the city of Davis’ C.A. Covell Award, more commonly known as “Citizen of the Year.”

Her nominators cited “her sustained volunteer work to promote platforms for positive discussion of race and social justice in our community.”

Two years ago she received a Chancellor’s Achievement Award for Diversity and Community.

In 2002, Murray-García organized community forums to respond to incidents of racist behavior in Davis schools and in the community. With the organization Youth in Focus, she trained high school students to conduct research to examine racial disparities in student experiences.

She also mentored young people to help them create a college prep-level U.S. history course at Davis High about race relations and the quest of both white and non-white ethnic groups for social justice. From this came an award-winning, youth-directed documentary film that tells the 10-year story of the “Race and Social Justice” class at Davis High. “The film remains a powerful teaching tool for my UC Davis Health graduate students, reminding some of how they too ‘learned race’ in America’s schools, while they were children and teens,” Murray-García said.

A member of the School of Nursing’s founding faculty, Murray-García teaches about health inequities in historical context, equipping students to transform systems and see the entirety of people who come seeking health care treatment and guidance.

She also serves as the director of social justice and immersive learning in UC Davis Health’s Office of Health Equity, Diversity and Inclusion. A new collaboration between UC Davis Medical Center and the School of Nursing includes a culture focused on relationships and ongoing learning, as well as Murray-García’s anti-racism and cultural humility training.

“Jann has shown us the incredible common ground we all share despite our race or ethnicity,” said David Lubarsky, vice chancellor of Human Health Sciences and CEO of UC Davis Health. “Her deep knowledge of local past injustices to minority communities helps inform today’s decisions, to make them both more effective and more culturally aware. This supports our efforts as we engage with the local community on the common goals of equity in health outcomes and work to build a healthier community all around us.

“We, and the city of Davis, are so fortunate to have her on our teams.”

David Olson, assistant professor in the departments of Biochemistry and Molecular Medicine, and Chemistry, has been named the recipient of a Young Investigator Award from the journal Life, an international peer-reviewed open access journal of scientific studies related to fundamental themes in life sciences.

Olson’s research focuses on compound-induced neural plasticity and the development of neurotherapeutics.

Upon receiving the Life award, he tweeted from his lab account: “Very honored to receive this award, which was only made possible by the hard work and dedication of the incredibly talented scientists that make up the Olson Lab!”

Since starting his career at UC Davis, Olson has published several highly influential papers (20 in total). Additionally, he has been awarded 13 grants as the sole principal investigator. He was named a Hellman Fellow and was the recipient of the Jordi Folch-Pi Award from the American Society for Neurochemistry.

Life’s Young Investigator Awards come with a prize of 1,000 Swiss francs (just over $1,126 today) and the opportunity to publish one paper free of charge before Dec. 31, 2021, in Life after peer review.

Isabel Montañez, distinguished professor in the Department of Earth and Planetary Sciences, has been named the recipient of the 2021 Francis J. Pettijohn Medal given by the Society for Sedimentary Geology, which also uses the acronym SEPM, for Society of Economic Paleontologists and Mineralogists, the original name. The Pettijohn medal honors excellence in sedimentology.

Raquel Aldana, professor of law, and Christopher Elmendorf, a Martin Luther King Jr. professor of law, have been elected to the American Law Institute. Widely considered the nation’s most prestigious nongovernmental legal-reform organization, the institute oversees projects that often form the basis of laws and become standards cited in judges’ opinions, legal briefs and scholarly articles.

The School of Law now counts 21 faculty members and emeriti in the American Law Institute, which caps total membership at 3,000.