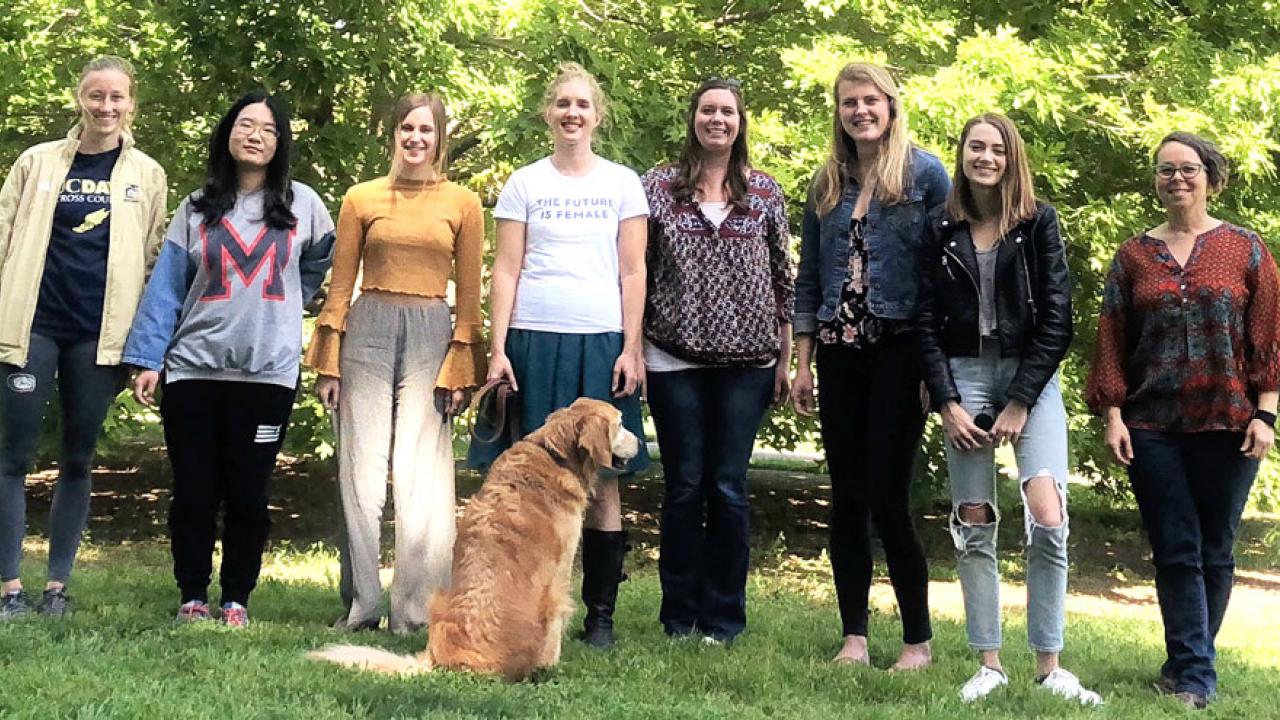 Before we start the new academic year, we’d like to finish up with some honors from last year — the chancellor’s awards to faculty members, graduate students and postdocs for excellence in mentoring undergraduate research.

“One of the attractive features of UC Davis that draws many bright students our way is the opportunity to conduct research as an undergraduate,” May said. He noted a “truly exceptional” number of 40 percent of undergraduates’ participating in hands-on research under mentorship of professors —  a level, he said, that far exceeds that of most other universities, where student research is largely confined to those pursuing graduate degrees.

“To the faculty members, graduate students and post-doctoral researchers who guide our students in the rigors of scholarly research, I offer my deepest appreciation for your vision, your patience and your stewardship of these fine young minds.”

The award recipients are listed here with excerpts from nomination materials as well as Chancellor May’s remarks.

See who won the Chancellor’s Awards for Excellence in Undergraduate Research.

The board is one of seven program units of the National Academies of Sciences, Engineering and Medicine, which provides independent, objective analysis and advice to the nation. The Crum award, named after a former board chair, honors outstanding leadership in transportation research or research administration.

Sperling, distinguished professor of civil engineering, and environmental science and policy, is recognized for his achievements in transportation research in the areas of energy, air quality, climate change and policy, as well as for the achievements of the many students he has mentored.

The award is due to be presented during the board’s 98th annual meeting, scheduled for January in Washington, D.C.

The Association for Computing Machinery’s Special Interest Group on Computer Graphics and Interactive Technique, or ACM SISGRAPH, has a new “academy,” and UC Davis’ Nelson Max is among the newly elected inaugural members.

Academy membership highlights researchers, practitioners, technologists, artists, designers and educators who are having a direct impact on the field of computer graphics and interactive techniques.

ACM SISGRAPH cited Max “for pioneering work in scientific visualization, for deep technical contributions, and for generous encouragement and simulation of ideas and intellectual exchange.”

Sonja Colbert, executive officer of Business and Technology Services in the Offices of the Chancellor and Provost, recently received the UC Leadership Impact Award during the second annual UC People Management Conference.

Chancellor Gary S. May noted the award in his remarks at an all-OCP meeting Aug. 27. “I would like to throw a spotlight on a very friendly and familiar face in the OCP family,” he said.

“Sonja was singled out as an exemplary leader who day-in and day-out manifests the UC principles of diversity, inclusion and engagement,” the chancellor said before asking Colbert to stand up — upon which she received rousing applause.

“I appreciate the personal recognition,” Colbert told Dateline UC Davis. “However, I am accepting this systemwide Leadership Impact Award on behalf of UC Davis, which has exceptional leaders who ‘boldly go’ and make an impact everyday.”

She holds a Bachelor of Science degree in accounting from California State University, Sacramento, and earned an MBA from the UC Davis Graduate School of Management in 2006. She became a UC Davis employee that same year, after having worked as a finance executive in the telecom industry.

In making the move to education, she carried on a family legacy — having a grandmother, aunts, uncles and cousins who worked in the field. She proudly noted her great-great-aunt Fannie C. Williams, who in 1946 had a girls dormitory named after her at Dillard University (New Orleans), honoring her work at Dillard and in education in general, and who more recently had a charter school named after her in New Orleans.

Colbert has been with the Offices of the Chancellor and Provost since 2013, overseeing the team responsible for finance, human resources, information technology and business support for the units within OCP. She worked previously in Accounting and Finance Services, Information and Educational Technology, and the Shared Services Center.