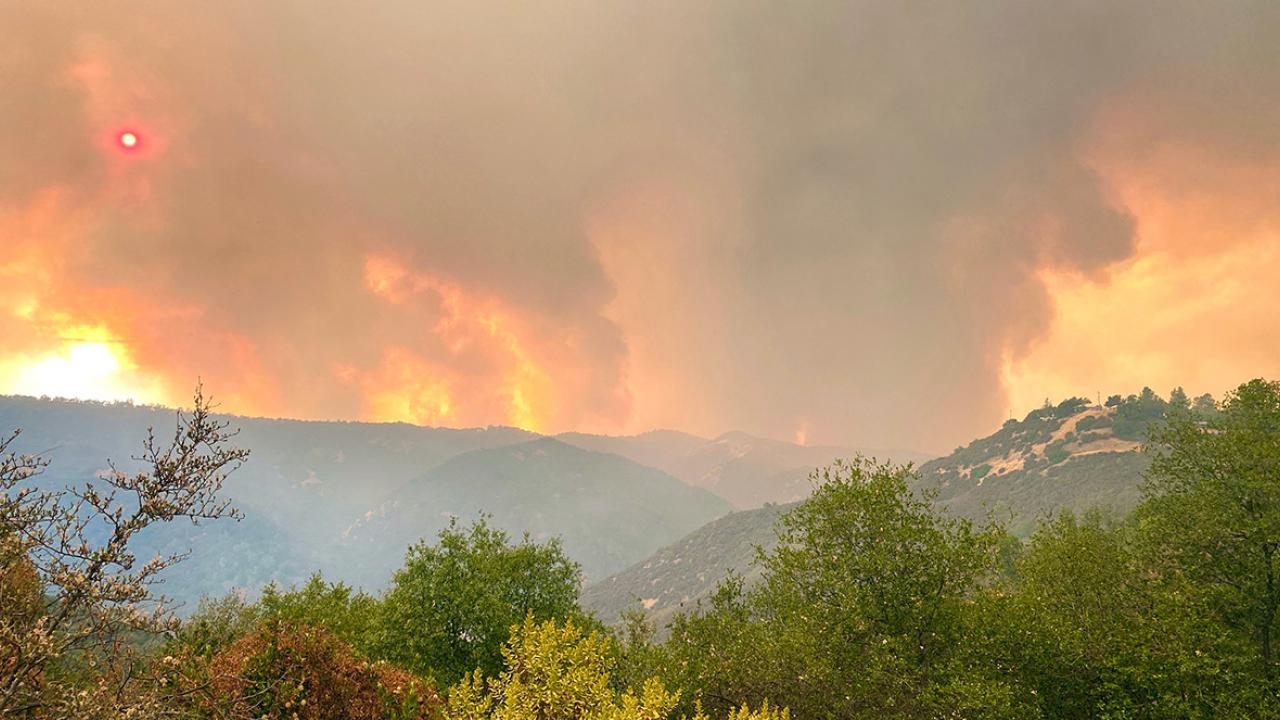 Updated 10:25 a.m. Aug. 19: The Vacaville Fire Protection District confirmed late last night that all four hikers who were at Stebbins Cold Canyon Natural Reserve when a morning fire broke out were evacuated safely with the help of the CHP, but the nearby Hennessy Fire was threatening another UC Davis reserve.

Flames were moving toward the Quail Ridge Natural Reserve, and director Shane Waddell and his family, who live in the area, evacuated to Davis, said Jeffrey Clary, associate director of the UC Davis Natural Reserve System.

He said this morning he was unsure about Quail Ridge’s status.

“Very little news is coming out of the rural Napa/Solano area, since the fires are now encroaching on the city of Vacaville,” Clary said. “I don’t think we can know much until we see some aerial photos, or until someone gets access to the area.”

The Hennessy Fire is among seven fires that Cal Fire has designated as the LNU Complex. A UC Davis fire crew has been working there since last night.

A vegetation fire broke out this morning (Aug. 18) at the entrance to UC Davis' Stebbins Cold Canyon Natural Reserve, director Sarah Oktay said. The reserve lies near the south end of Lake Berryessa west of Davis.

No researchers were on site, Oktay said. A few hikers were using the trail, and, as of around noon, Oktay was waiting to hear their status from firefighters. The nearby Canyon Creek Resort was being evacuated, she said.

The Vacaville Fire Protection District said just after 10:30 that the fire was 2 acres in size.

At least three other major fires are burning in the general area of Lake Berryessa: To the west, the 2,700-acre Hennessey Fire and 4,500-acre 15-10 Fire, and to the north, the 5,000-acre Gamble Fire, with Cal Fire reporting it had no containment on any of these fires as of this morning. The Yolo-Solano Air Quality Management District said smoke from those fires was impacting the air quality in Davis.

Over the previous five days, UC Davis firefighters headed out to assist on other wildfires around the state.

Capt. Steve Dunn departed Monday (Aug. 17) to lead a strike team of fire crews from other agencies on the Jones Fire west of Nevada City, Trauernicht reported. Evacuations remained in effect this morning after the fire grew to 550 acres overnight and was only 5 percent contained, according to the Nevada County Office of Emergency Services.

A four-person UC Davis crew aboard the Fire Department’s Brush Truck 34 is battling the Ranch Fire in the Angeles National Forest. The U.S. Forest Service reported Monday night that the fire had burned more than 19,000 acres and was 38 percent contained.

Earlier in the month and in July, UC Davis sent firefighters to help with blazes in Riverside, Fresno and Lassen counties.

Coffee Chat With the Chancellor

“Through this program we invite staff to share ideas on how to improve processes, increase revenue, implement solutions to challenges experienced by staff, and more,” according to an announcement in the Aug. 6 edition of Staff Voice.

Coffee Chats With the Chancellor are scheduled from 8:30 to 9:30 a.m. on a monthly basis; specific dates for each event will be announced to applicants as soon as confirmed on the chancellor’s calendar. Staff Assembly will work closely with each participant to ensure they are able to attend a coffee chat on a date that accommodates their schedule.

Eligibility requirements and the application are available here.

The university has released its report on employee compensation for calendar year 2019, the Office of the President announced Friday (Aug. 14). This means that individual employees’ pay information for last year is now available to the public on the university’s wage database and is available for posting on other publicly accessible databases.

UC discloses its payroll information annually as part of the university’s commitment to transparency and public accountability. The disclosure is consistent with similar practices at many other public institutions.

The California Public Records Act specifies that employee compensation at public institutions is public. This is noted in UC personnel policies — PPSM-80 for staff and APM-160 for academic appointees — that also specify the information (such as name, position and title, along with salary) that, in general, the university shall release upon request.

UC also has provided a summary of employee compensation for calendar year 2019.

Questions about access to the payroll data? Send an email to pra@ucop.edu.

Yolo County is asking for the public’s input on a study that will examine options for a new, safer railroad crossing on County Road 32A between Davis and the Yolo Causeway.

Besides drivers who use the existing crossing, where County Road 32A connects with County Road 105, the project should also be of interest to bicyclists going to and from the causeway, because the bike path crosses County Road 32A and runs on its shoulders in the same area.

The existing crossing requires a 90-degree turn by drivers going east or west on County Road 32A — and when drivers are late in braking, their cars can slide onto the Union Pacific Railroad right of way.

The county is working with the city of Davis, Bike Davis, Union Pacific, the state Public Utilities Commission, the Yolo County Farm Bureau and the Sacramento Area Council of Governments on the crossing study.

Three alternatives are still under review: an overhead crossing and two at-grade crossings, each coupled with a road that would be realigned to eliminate 90-degree turns. All three options are east of the existing crossing, so that part of County Road 32A would be relocated north of the railroad tracks.

The study will also look at improved connectivity between the city’s Class I bikeway, which now ends at the County Road 32A crossing, and the causeway.

More information, including maps, is available on this county webpage. An open house will be held online from 5:30 to 7 p.m. Monday, Aug. 31. Written comments are due by Sept. 4. See the webpage for details on attending the open house and submitting written comments.