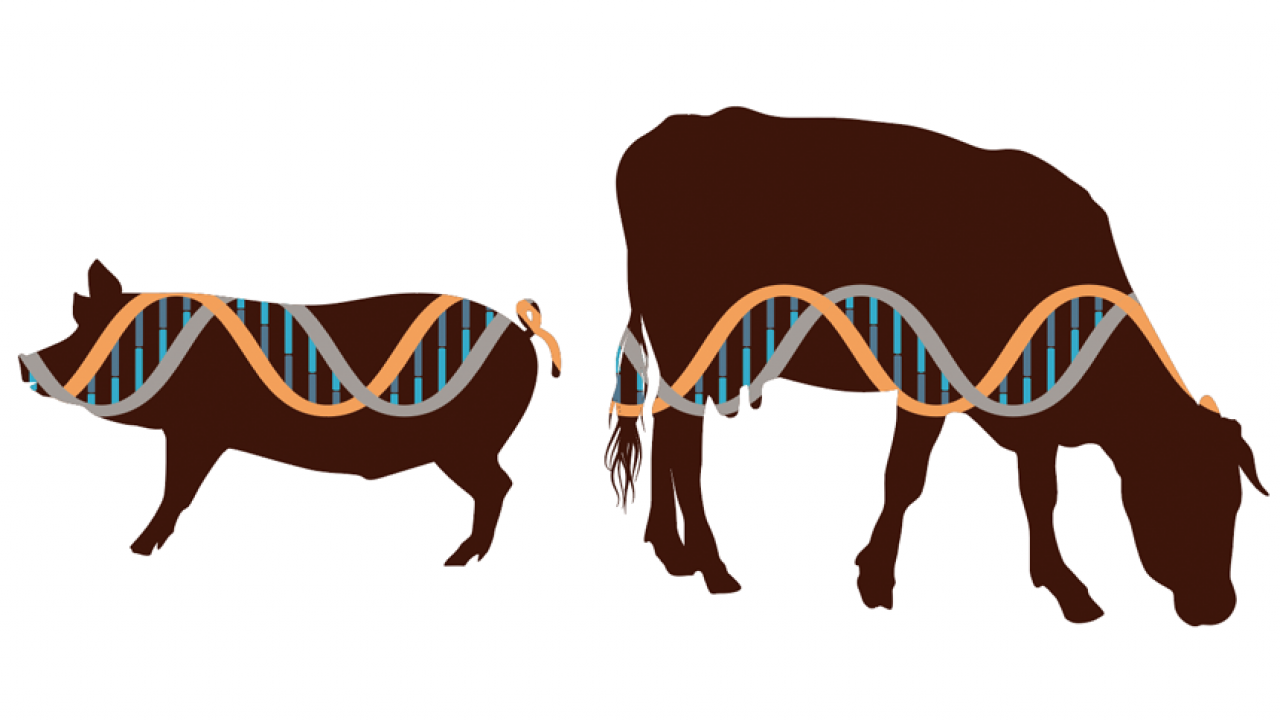 Thanks to pioneering research in UC Davis’ Department of Animal Science, a pig may one day produce a pancreas rather than a pork chop.

It is the latest foray for a small but tenacious research group, which over three decades has worked to genetically improve livestock with progressively more sophisticated biotech tools.

Staunchly committed to making discoveries that broadly benefit agriculture — from dairy producers and ranchers to children in developing countries — the scientists are also looking to farm animals for help to tackle human health challenges.

Veterinarian and reproductive biologist Pablo Ross, the group’s most recent addition, is combining gene editing and embryo transfer techniques to explore the possibility of growing human transplant organs in livestock. He is starting with pigs, which are biologically similar to humans and give birth to large litters of young.

Gene editing is one of the newest and most promising tools of biotechnology, using specific enzymes and RNA segments to precisely create an alternate version of a gene in place of the original.

After removing two dozen eggs from a pig’s ovary, Ross works under a microscope, deftly executing a chain of procedures that will cause the unfertilized egg to develop into an embryo. He then uses gene editing to eliminate the gene in each pig embryo that otherwise would cause a pancreas to grow.

Next, he injects the embryos with human stem cells, capable of differentiating into any type of cell or tissue in the body. Once embedded in the embryo, the cells should grow into a human pancreas in the very spot where the pig pancreas would have developed.

Hours later, the embryos are surgically transplanted into the uterus of a pig and allowed to grow for just 28 days — the equivalent of one month of gestation in a human.

The centimeter-long embryos will then be removed from the pig and examined to determine whether the human cells are indeed growing into pancreases.

“We are opening the door for these human cells to go to the pancreas, while we are also evaluating if the cells will go to other organs and in what levels,” Ross said.

In 2010, Ross’s research colleague, Hiromitsu Nakauchi of Stanford University, demonstrated in Japan that similar methods work in mice. But the ability to combine human and animal genes in one embryo is so new and powerful that it has raised concerns.

A year ago, the National Institutes of Health placed a moratorium on funding for such research. It asked the scientific community and the public at large to pause and consider ethical issues related to combining human and animal cells in one embryo — creating what is known as a chimera, or animal with two cell lines. The agency is now considering lifting the yearlong funding ban and moving forward to support such projects, with an added layer of review for some studies. 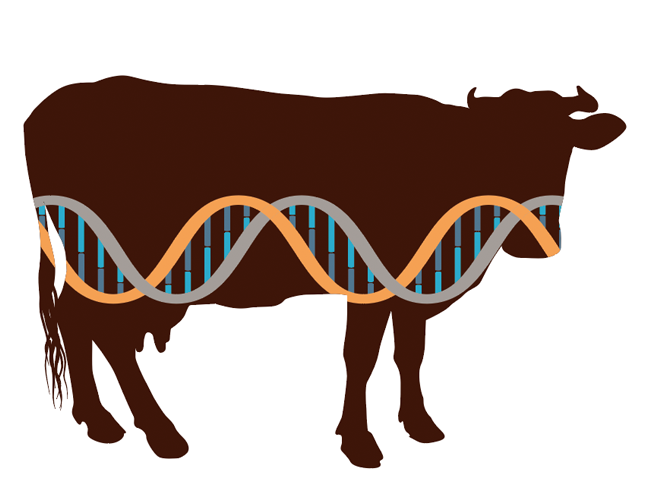 Ross works with intensity. Without external funding for this research, he does much of the hands-on laboratory work himself — tasks that normally would be carried out by graduate students and postdoctoral researchers.

He is keenly aware that more than 120,000 people in the U.S. are on waiting lists for transplant organs, many unable to wait more than a few months. On average, 22 people nationwide die each day waiting for organs, according to the U.S. Department of Health and Human Services.

Ross said he hopes organs grown in livestock will eventually provide a reliable and predictable source of organs for transplant patients. He points out that the livestock-derived organs would join a continuum of animal products that have been used in human medicine for years, including enzymes like heparin and pepsin, hormones such as insulin and scaffolding for heart valves.

If the research progresses well, human organs grown in pigs or sheep could be available for transplants in 10 years, he speculated.

“But that means nothing; it’s like saying when we will land on Mars. Nobody really knows,” he said. “This is still in its very early stages, but it looks promising.”

Optimism, tempered by realism, is a survival skill for all researchers, but particularly for Ross and his colleagues. Scientists using genetic engineering rather than traditional breeding to improve animal traits have traveled a much rockier road than their counterparts working on GMO plants.

The first GMO food product approved for sale in the U.S. was the FlavrSavr tomato, arriving in grocery stores in 1994. Although not a commercial success, the FlavrSavr opened the door for a host of other GMO crops, including field corn, soybeans and cotton.

Today, more than 90 percent of all field corn, soybeans and cotton planted in the U.S. are genetically modified varieties, according to the U.S. Department of Agriculture.

In contrast, the U.S. Food and Drug Administration took until 2015 to grant approval to the first GMO food animal — the AquAdvantage salmon, genetically engineered to carry a Chinook salmon gene that speeds growth and improves feeding efficiency in farm-raised fish.

Alison Van Eenennaam, a UC Cooperative Extension biotechnology specialist and part of the UC Davis animal science team, served on an FDA advisory committee charged with reviewing the AquAdvantage commercialization proposal. Later, in a 2010 commentary in the journal Nature Biotechnology, Van Eenennaam and a colleague wrote that the federal review processes for genetically engineered food animals was tortuously drawn out, scientifically unjustified and likely to rob society of both environmental and economic benefits.

“We do not have science-based regulations,” said animal scientist Jim Murray of the federal approval process for GMO animals. Murray has been working on genetically engineered livestock at UC Davis since 1989.

“You would think that by now we would have genetically engineered animals available commercially, but we don’t,” he said, noting that while the science has progressed, the regulatory process has stalled.

When the FDA considers genetically engineered animals for approval, it treats the insertion of a new gene into the animal as if the gene were a drug. In short, the animal is judged on the process used to develop it rather than on the safety and healthfulness of the resulting product.

Despite the regulatory and funding roadblocks, Murray and fellow researcher Elizabeth Maga continue to work on a line of genetically engineered goats, which carry a human gene that produces elevated levels of human lysozyme in the goats’ milk. Lysozyme is an antimicrobial enzyme that occurs in human tears, saliva and breast milk but is found only at low levels in the milk of goats and cows. Murray likes to point out that people swallow lysozyme every day. 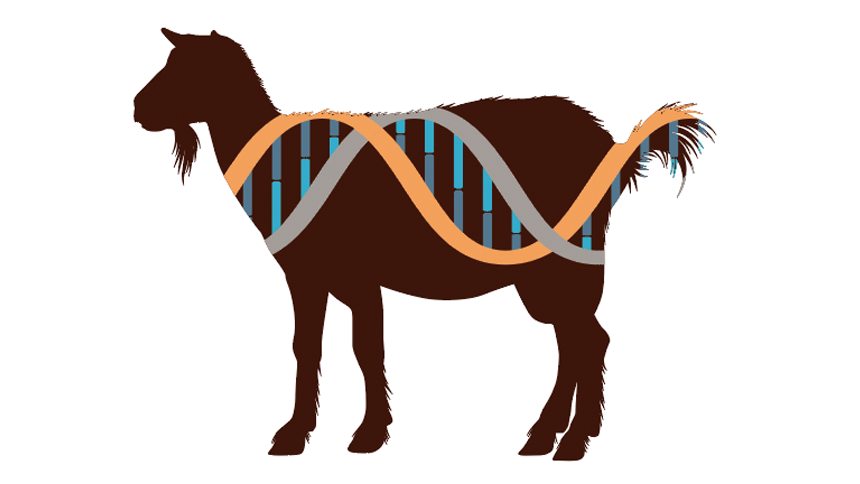 In 2006, the researchers responded to a request from the Brazilian government to establish a herd of the transgenic goats in that country, whose poorest communities are plagued by diarrheal diseases.

The lysozyme-rich goat’s milk will be available for human clinical trials, as soon as the Brazilian government allots funds for the studies. Other countries in Central Asia and East Africa also have expressed interest in establishing research herds of the lysozyme goats.

“These animals have a lot of potential for benefiting human health,” Maga said, “Lysozyme-rich goat’s milk wouldn’t be the ‘silver bullet’ for diarrheal disease, but when combined with other therapies like oral hydration, it could make a tremendous difference for millions of children.”

Meanwhile, work by the animal science team reflects UC Davis’ commitment to a One Health view of the world, acknowledging that the wellbeing of people, animals and the environment are inextricably linked. The research group continues to pursue several different agricultural and biomedical applications for genetically engineered animals including:

This story appeared in the fall/winter 2016-17 issue of UC Davis Magazine.