It may have been hard to see some of the players on the field at last weekend’s Salute to Heroes football game, but it was easy to see the excitement for our military personnel and first responders, along with the four-legged star of the show: Pint! The Nova Scotia duck tolling retriever is carrying out his last season as the official retriever of the kickoff tee at Aggie home games, and was honored with a bobblehead giveaway and even a cake (although he saved it for the humans, opting for a doggie cake later).

See some highlights from the game, as shared on social media:

In memory of those who have fallen we will be honoring the Gold Star Aggies on each football helmet worn today #morethanfootball pic.twitter.com/1Xt4TObatj

Let’s take one more look at 🪖 for today pic.twitter.com/N8nvwdKOl8

We are at Aggie Stadium to cheer on @ucdavis 🏈! Today’s Salute to Heroes game will also feature equipment displays from your fire department so stop by & say hi 👋🏼 to our crews. It’s @UCDfootball vs. EWU - expect a great game @ 5pm #GoAgs pic.twitter.com/tXoWwZjOmM 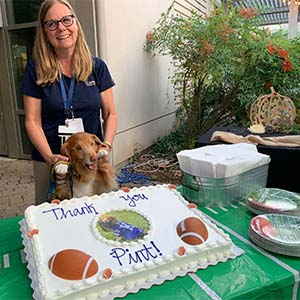 Pint the Dog: Great time last night!  I love the band.  I wasn’t allowed any of this cake but later I got my very own cake! 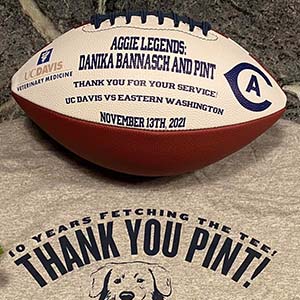 Pint the Dog: Wow — my boss says she is pretty overwhelmed by all this Pint love. I really liked the cake the athletics department bought me.

Today, we are proud to recognize and celebrate UC veterans and their families for their dedicated service. We are grateful for their contributions and for the perspectives and experiences that servicemembers and veterans bring to our campuses. https://t.co/IgSkJiykQM

From GSM to wine industry

What do students at the Graduate School of Management learn about the wine industry? Hear one alumnus’ story in the above video about going from UC Davis to a career as a wine buyer for a large grocery chain.

Curtis Mann, MBA ’06, now a master of wine and group vice president at Albertsons Companies, shares his career journey, along with some information about the challenge of leading in a fast-paced environment. He also reminisces about his favorite professors and courses.

A very Happy Birthday to Sacramento painter Wayne Thiebaud, who turns 101 today! Read our interview from last year where he talked about his advice for young artists, his covers for The @NewYorker and his sweet answer for his favorite kind of pie: https://t.co/JFpvcNxVX6🥧🎨 pic.twitter.com/Qs98f2RwwN

Happy 101st Birthday to Wayne Thiebaud, who was born #onthisday in 1920! In the early 1960s, Thiebaud was acclaimed as one of the defining practitioners of Pop Art and has continued to be considered one of California’s most important and influential artists. #publicart @SFAC pic.twitter.com/Kb4jEXNept